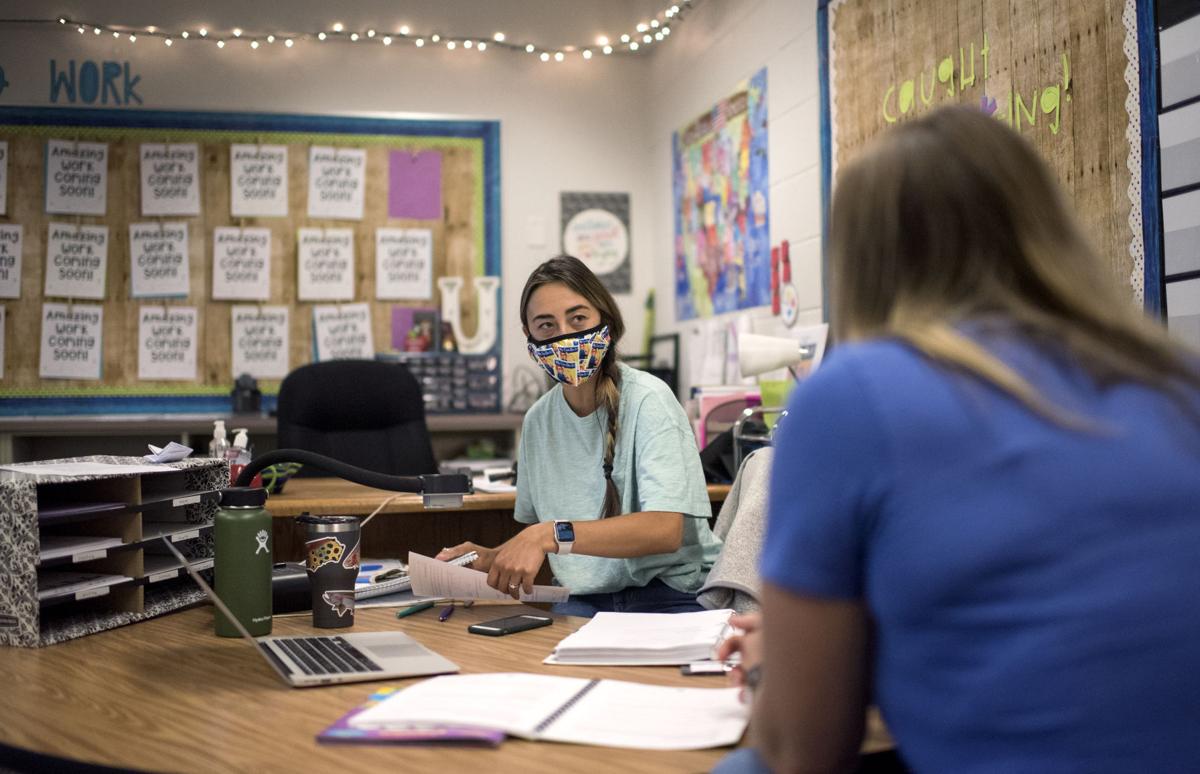 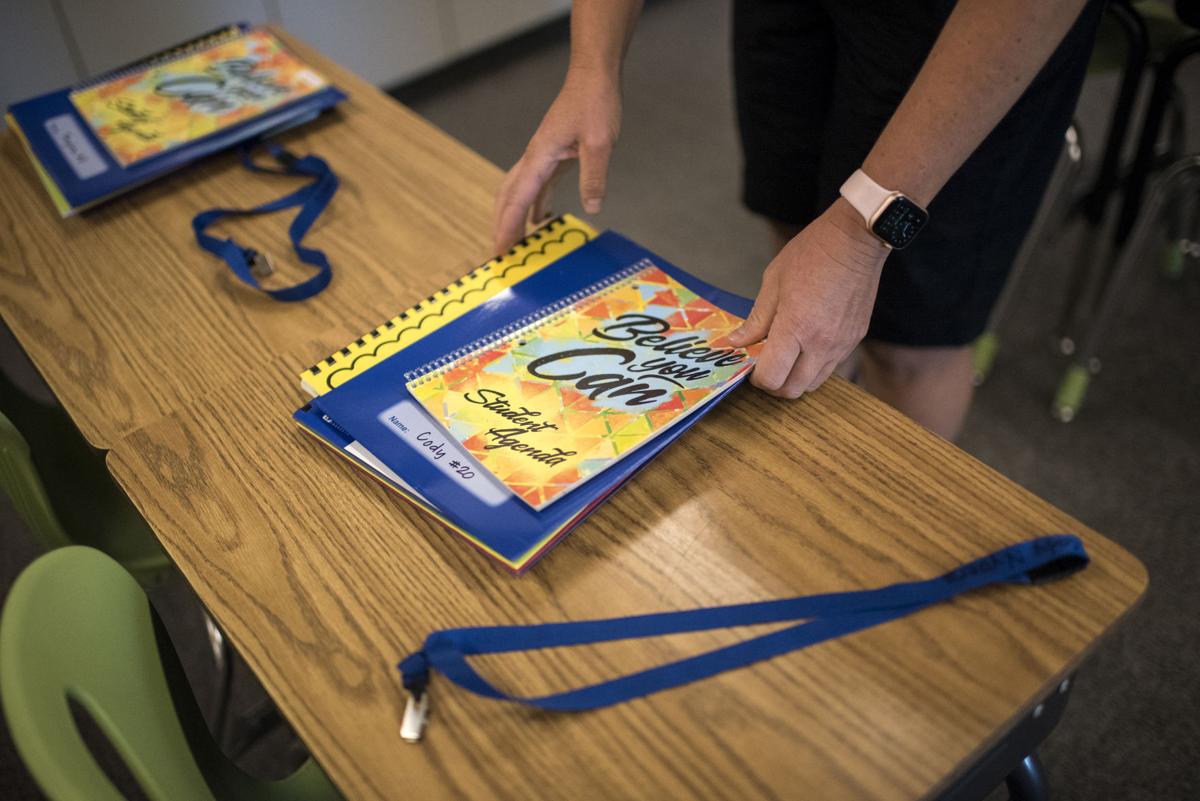 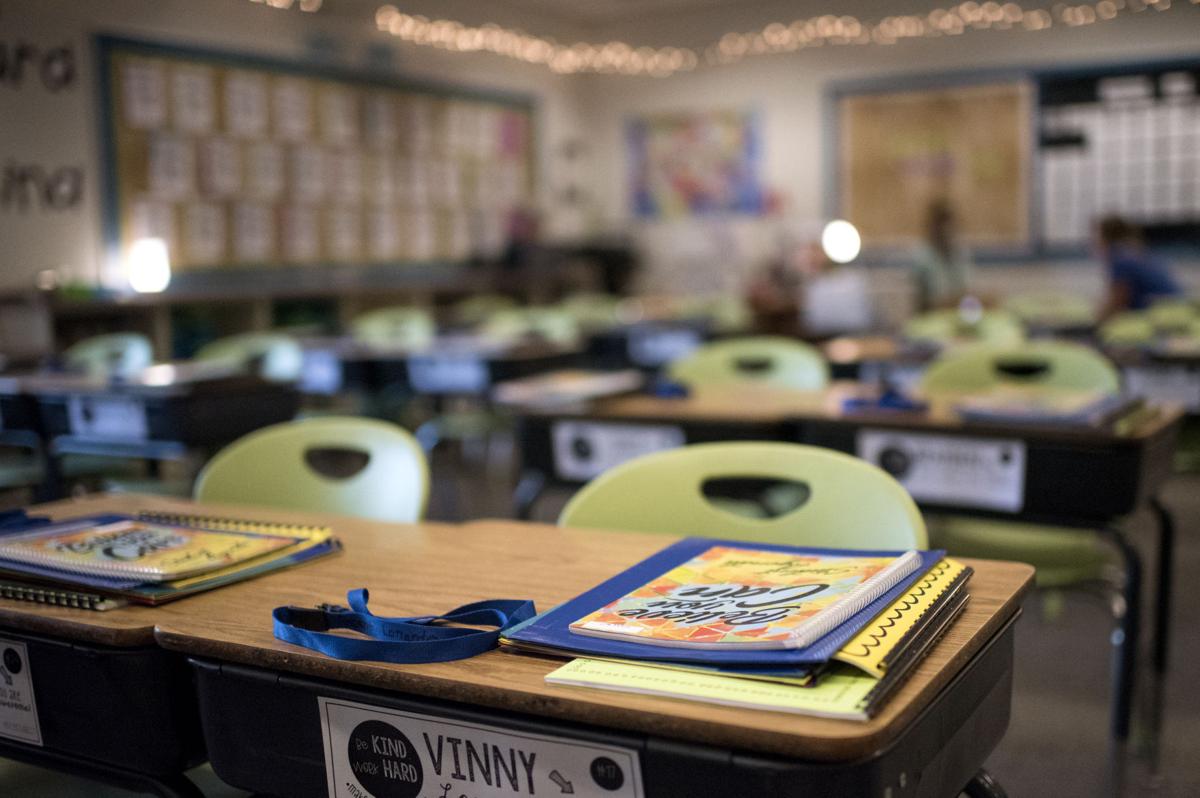 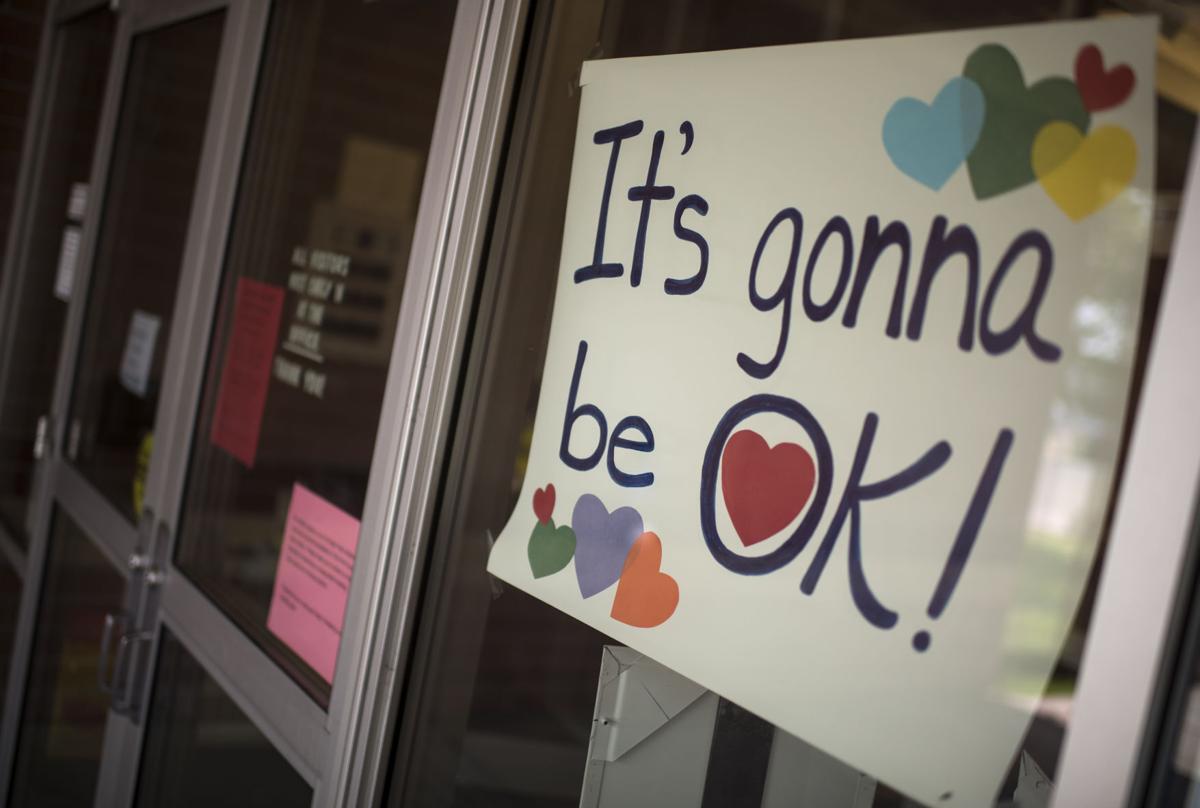 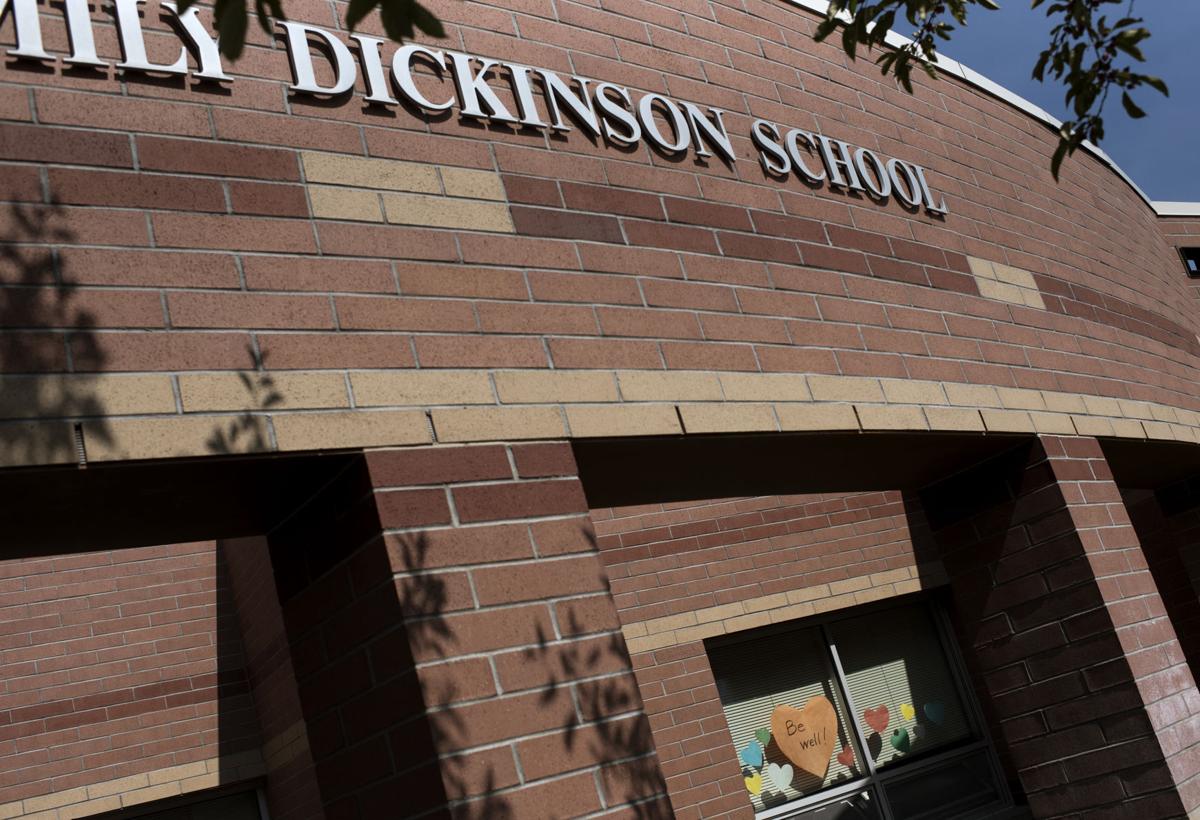 Last week, teachers returned to prepare for students’ arrival, as schools will begin welcoming more than 7,000 students back to school with a blended model of learning on Tuesday.

Like any typical post-summer return to school, there were bulletin boards to set up and curricula to prepare. But in the pandemic era, teachers are also designing classes with an eye towards social distancing and an emphasis on adaptable and engaging online learning.

“In general, it’s been pretty similar,” Eric Matthews, a technology teacher at Chief Joseph Middle School, said of the preparations. “The differences are being aware of keeping kids distanced as much as possible. Desk arrangements are looking different to keep kids separate but still let them interact in a way that feels authentic.”

Anna Galindo and her daughter, a junior at Bozeman High School, both watched the virtual meeting on Aug. 10 when the School Board trustees voted for the two-day-week plan. More than 800 people listened to the online Zoom meeting, which extended late into the night.

In what Galindo described as a “very long and emotional meeting,” she said the district chose to attempt to control the levels of the virus’s spread instead of the governor or the state of Montana being held responsible for decreasing the cases.

While she understands the board’s tough decision, she said it’s frustrating seeing nonessential businesses open, like restaurants and bars, while schools will only partially open.

She said the uncertainty around what the school year will look like remains one of the main concerns.

“The most important thing is if we can get them back to five days in the school, even if things change. I’d rather have that than the uncertainty of not knowing when they’re going back,” Galindo said.

As for her daughter, Galindo said she was glad to be running cross country and to see friends and teachers for two days out of the week but remains nervous about the online portion of school.

Other parents and students also shared concerns over how remote learning will look this fall. In addition to adapting to additional safety procedures, teachers, students and parents will also be navigating a new online learning management system, or LMS.

“There’s a huge learning curve,” said Tami Phillippi, head of the Bozeman Education Association, representing teachers in the district. “It’s a big ask for teachers to learn it and figure it out by September 8.”

The start to school was delayed a week so teachers could receive additional training on Canvas, the LMS platform the district chose.

“This week was definitely invaluable. There was so much to learn,” Matthews said.

He said additional time might have been helpful, “but at some point you just have to get going and see how it works.”

While the Bozeman School District teachers were up to the challenge of learning the system there was a level of frustration because the educators want perfection for their students, Phillippi said.

“The minute they’re in their classrooms, welcoming students, they want it to be perfect,” she said.

Phillippi and Matthews both said the learning management system would ultimately be a benefit to teachers, students and the district.

Like Galindo, Sarah Brechbuhler, a district parent to four children, is also concerned about how her family will adapt to online learning three days out of the week. Brechbuhler’s children are in the 10th, eighth, sixth and fourth grades.

Brechbuhler said her youngest child got distracted with at-home learning in the spring and she hoped the new platform would be a “more consistent program than what we were using in the spring.”

Meredith Johnson, with children in the 12th, 10th and seventh grades, said her family was pretty fortunate with older children who can do online learning by themselves.

“I certainly wish the kids were going every day, but I’m hopeful by not going everyday we should be able to stay open,” she said.

She added her children were excited to be going back but a little nervous to be around so many people.

“Most of my friends who are teachers in the district are nervous and excited too,” Johnson said of the return to in-person classes. “Online learning hasn’t been super fun for either group.”

The concerns around this year’s start to school go beyond the typical first day of school nerves for children, parents and teachers, according to Sarehl Lomme, a licensed counselor at the Early Childhood Counseling and Consulting in Bozeman.

“Parents have reported a lot of guilt either way,” she said. “’Am I doing what’s right for my child? Is this going to impact their future learning and future education outcomes?’ There’s a lot of pressure on parents right now.”

Lomme said there is no right or wrong way for a family to feel about the start to school, but it was important to make the unknown known.

“Establish as much predictability as they can,” she said. “Having schedules and routines so children know what to anticipate or what to look for is helpful.”

Single-parent families, families with immunocompromised members or students with learning challenges can often have additional uncertainty and anxiety around the start of school, according to Lomme.

One single-mother, who asked for her name to not be reported, said she understood the school district was in a tough place and made the best decision they could, but the blended model has put her and her first-grade daughter in a tough place.

“I’m struggling very much in terms of trying to figure out what I’m going to be doing with my daughter the other three days,” she said.

As part of the blended model, children will be expected to be online at synchronized times with their in-person classmates. Many parents, particularly those with younger children, report struggling to plan for the three-days of online instruction and the uncertainty of what that will look like.

“It’s literally a day-by-day scenario for me,” the mother with the first grader said. “It’s impossible for me to make plans around my daughter’s online learning education and my own work schedule because I don’t have any firm times yet.”

Those first day nerves can also extend to teachers.

“Oftentimes the conversations are centered on how children don’t often fall sick with COVID,” Phillippi said. “But adults are also in the building, teachers and staff need to be safe too.”

She said it was important to ensure everyone was returning to school in a way that was safe for adults, too.

“Teachers are, in general, the compassionate caregiver types, and everyone I talk to is making sure the students are safe and staff are safe,” Matthews said.

He said it was important for “teachers to feel safe so they’re exuding an aura of safety to students.”

Throughout conversations with parents, teachers and district officials, the consensus seemed to be the same: grace and patience would be needed to navigate through the uncertainty ahead.

“If we all give each other grace, we’ll get through this a lot better,” Matthews said.