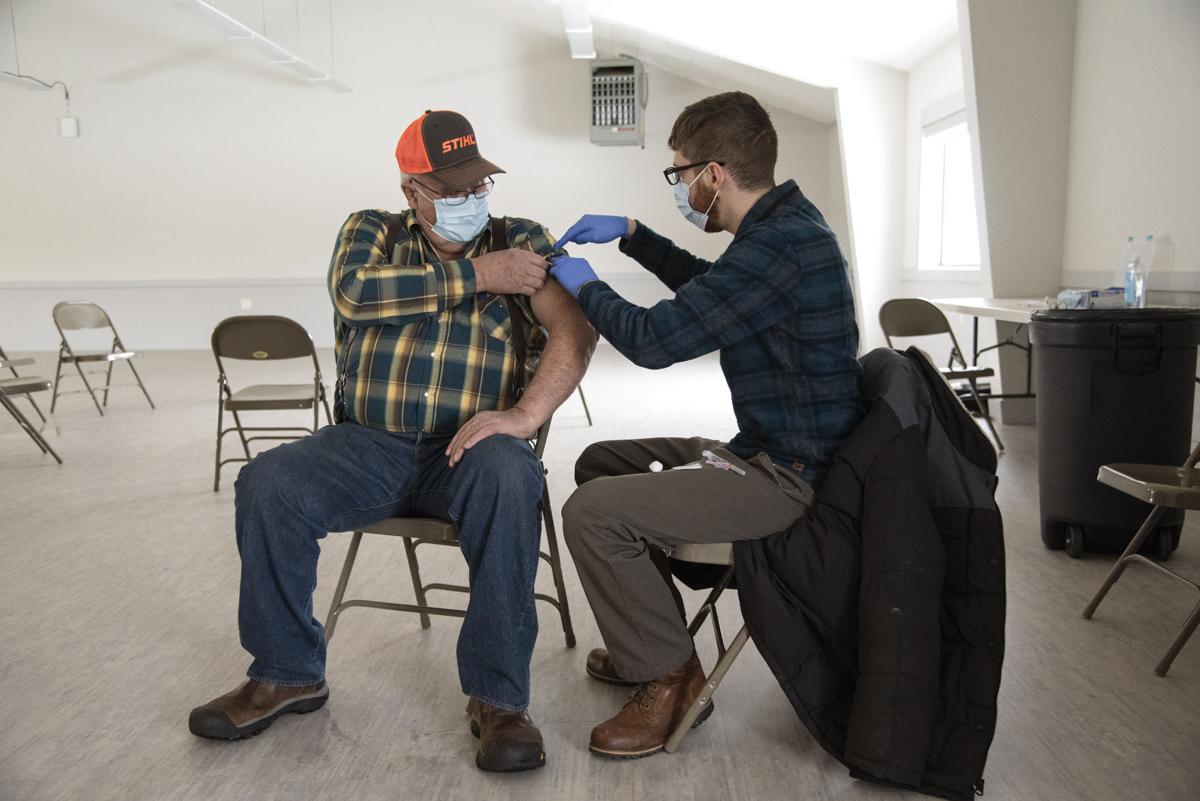 Park City-County Health Director Alex Baukus administers the first dose of the Moderna vaccine to Tom Gilbert, 76, at a walk-in clinic at the Shields Valley Community Center on Feb. 17, 2021, in Clyde Park. 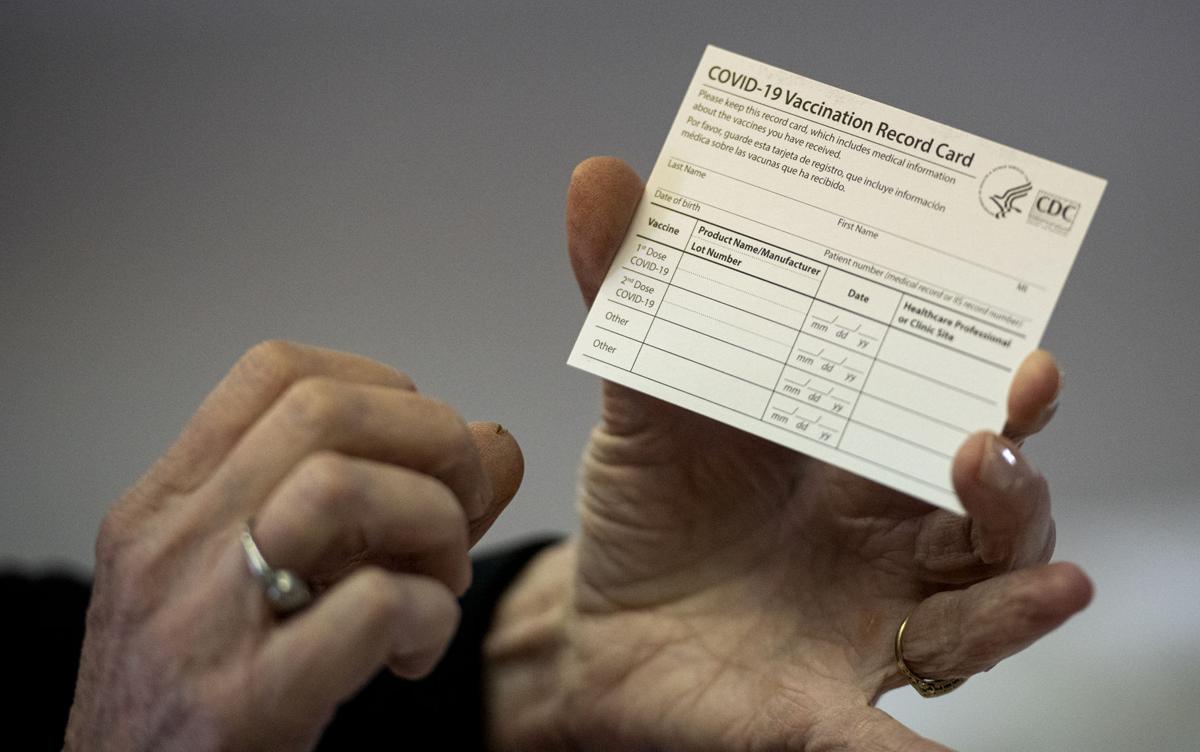 Park City-County Health Officer, Dr. Laurel Desnick, holds an example of a record card given to each patient after they are vaccinated. 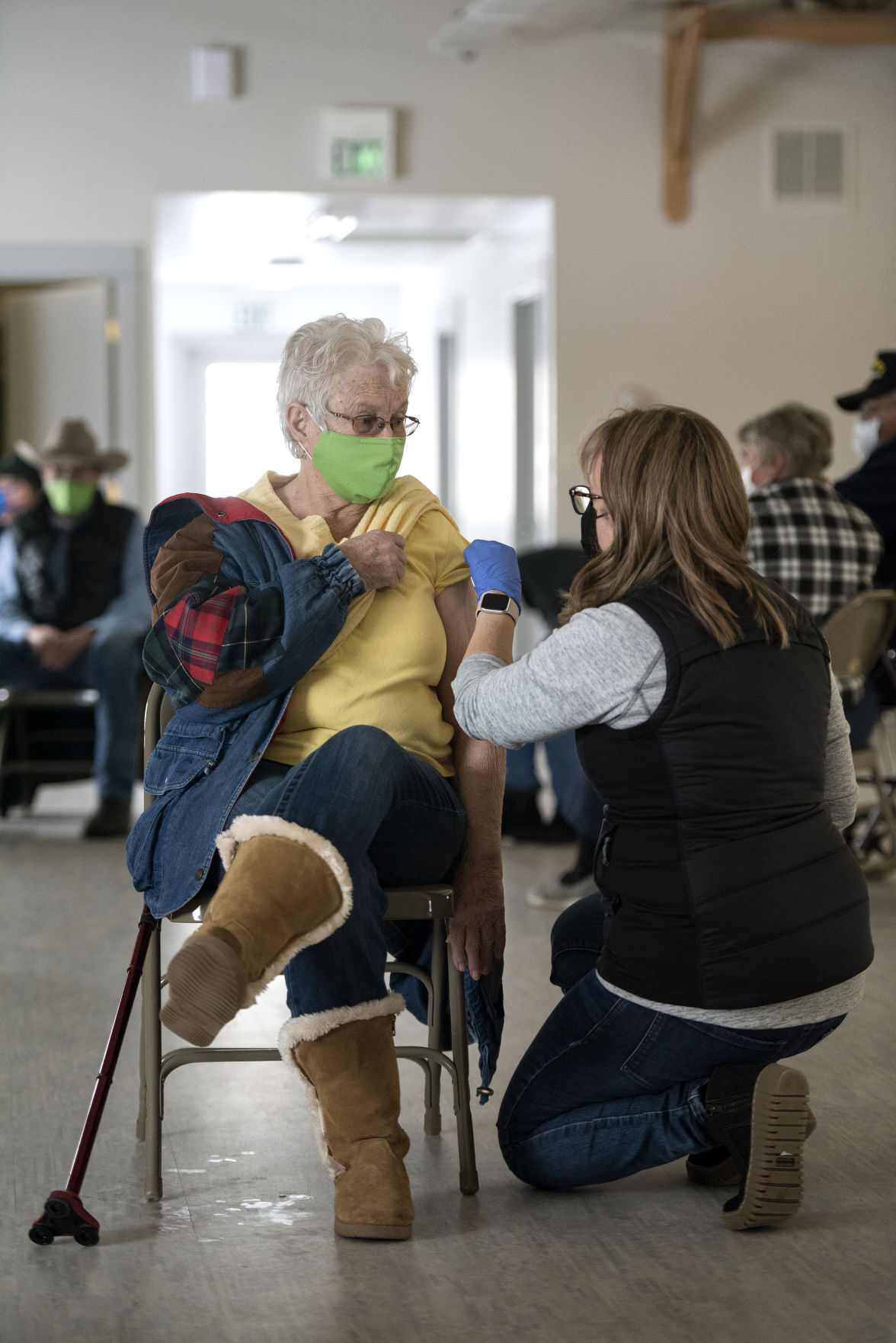 Registered Nurse Kris Pierson administers the first dose of the Moderna vaccine to Elaine Logan, 77, at a walk-in clinic at the Shields Valley Community Center on Feb. 17, 2021, in Clyde Park. 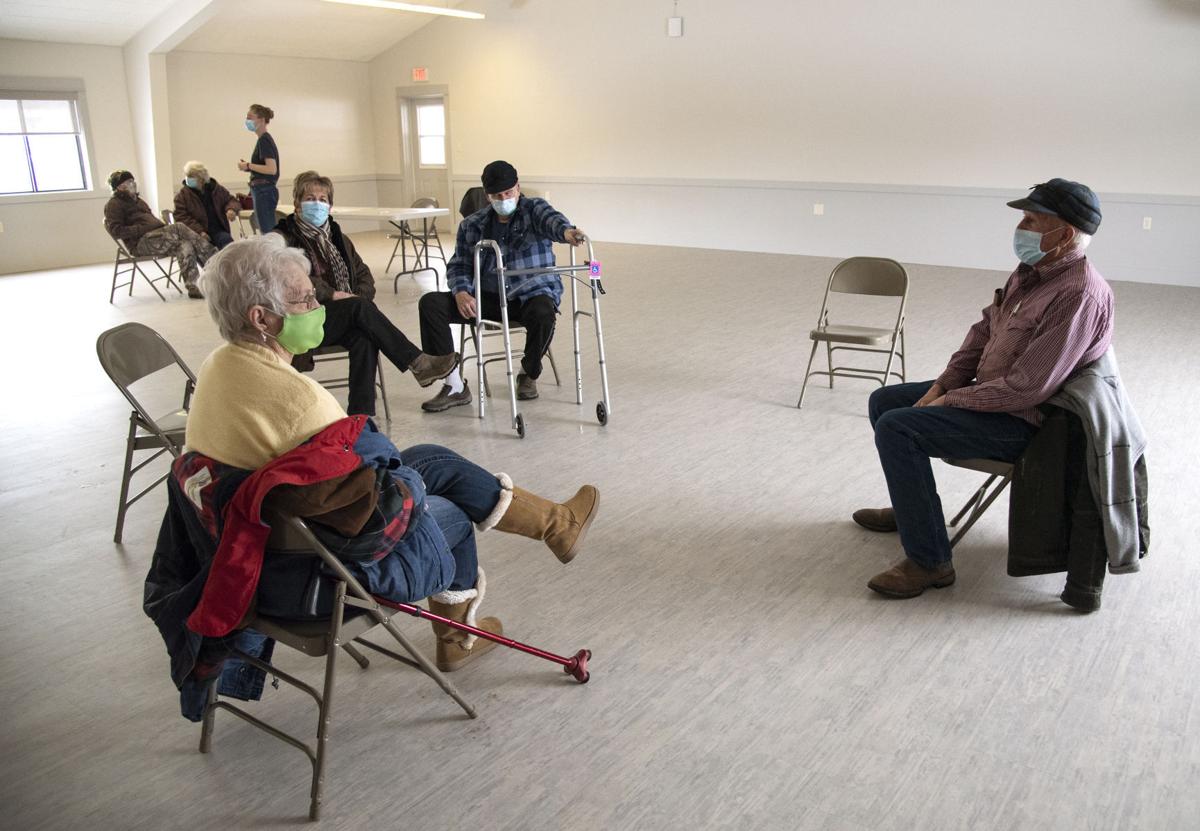 Elaine Logan, left, waits for 15 minutes after receiving the first dose of the Moderna vaccine, while Phil Gilbert, right, waits for his shot at a walk-in clinic at the Shields Valley Community Center on Feb. 17, 2021, in Clyde Park. 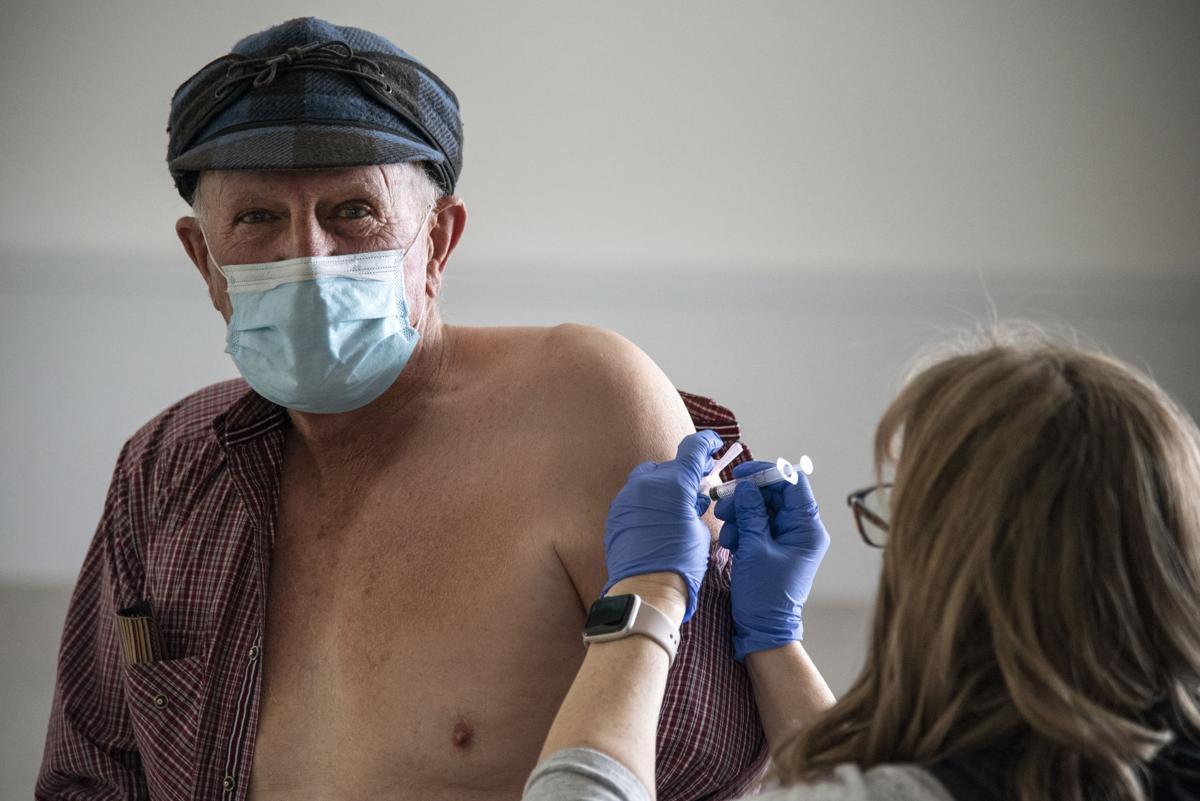 Registered Nurse Kris Pierson administers the first dose of the Moderna vaccine to Phil Gilbert at a walk-in clinic at the Shields Valley Community Center on Feb. 17, 2021, in Clyde Park.

About 40 people over age 75 had arrived at the Shields Valley Community Center to receive their first dose of a COVID-19 vaccine from the Park City-County Health Department. In an attempt to reach residents who live largely without internet or cell service, appointments were not required.

“We have such an elderly population that lives outside Livingston that we knew if we didn’t do something like this, they would be left out,” said Health Officer Dr. Laurel Desnick.

This week’s clinic was just one example of strategies Montana counties and tribal nations are using to vaccinate residents spread across the state.

Elaine Logan said her children convinced her to sign up. They suggested she could do so online or using information from a text notification system, two services she doesn’t have, so the walk-in clinic was her best bet.

“I just don’t have many options,” she said.

Volunteers and staff from the health department and other local government agencies set up chairs, handed out paperwork, walked people through the required forms, gave the shots and monitored people afterward for possible adverse reactions.

Park County receives about 300 doses per week, and if that number increases, as is expected, the health department will need even more distribution assistance, Desnick said.

Other small counties have health departments unable to manage vaccinations along with the additional work that has come with the COVID-19 pandemic.

“Given how few public health staff we have, the county isn’t able to offer vaccinations,” said Spokesperson Bonnie O’Neill in January when the state expanded vaccinations from health care workers and first responders — Phase 1A — to adults over 70, those 16-69 with certain underlying health conditions and people of color.

Even large counties, like Gallatin, have struggled to balance the ongoing work of managing the pandemic with the new work related to vaccination.

“While we’ve built the capacity (to handle more cases), we are doing this at the same time we’re working through our incident command structure to administer vaccines,” Health Officer Matt Kelley told the Gallatin City-County Health Board last month. “It’s an enormous challenge.”

To manage the distribution, health departments are partnering with other local organizations.

In Park County, the health department, Livingston HealthCare, Community Health Partners, Mammoth Clinic, Albertsons Pharmacy and Western Drug are working together. Given the limited vaccine supply, they have begun Phase 1B vaccinations with those over 75 and people of color, a subset of the state’s eligibility criteria.

To identify residents over 75, the health department has asked people to sign themselves or their elderly friends and neighbors up on a waitlist on the department website. Staff then contact those on the list to schedule appointments with one of the six local providers.

“We knew if we made appointments first come, first serve through the internet, we would be favoring people with more resources, better access to the internet,” Desnick said. “For many of us, the internet is how we do business, but that is not how everybody does it.”

In a few weeks, Desnick said she hopes to expand vaccinations to everyone over 70.

In Clyde Park, she turned away a few people ages 70-75 but urged them to bring friends or relatives over 75 in.

Gallatin County started with a similar strategy, restricting eligibility in late January to residents over 80 but soon abandoned that plan and widened eligibility to all those in Phase 1B to eliminate confusion.

Other counties, including Yellowstone, decided not to place restrictions on who in Phase 1B could be vaccinated. When Gov. Greg Gianforte announced in January that the state was moving into Phase 1B, the county decided to let all its residents eligible in Phase 1B sign up for the vaccine rather than creating stricter, local rules on who could receive the vaccine.

The patchwork of eligibility rules across Montana is a response to the limited vaccine supply. Montana is simply not receiving enough doses for everyone who wants one.

Gianforte and Montana’s federal delegation — Rep. Matt Rosendale and Sens. Steve Daines and Jon Tester — have been urging the Biden administration to increase the number of doses the state receives.

As of Friday, about 19% of Montanans had received at least one dose of a vaccine, according to the state Department of Public Health and Human Services.

For now, the vaccine supply remains uncertain. The states and counties receive only about a week’s notice of the number of doses they will receive, which makes planning difficult.

And then, there can be unforeseen circumstances.

Shortly before the Clyde Park clinic was set to begin, Desnick learned the doses she had been counting on for the event weren’t going to arrive on-time due to weather-induced shipping delays. She was able to pull together about 40 doses to ensure the clinic went forward but worried she might run out and have to turn people away.

“The groups we are targeting are hard to reach, so the thought of rescheduling was impossible,” she said.

Richard Juhnke was one of the last people to show up, at about 1:40 p.m. The chairs were mostly empty, and most doses of the vaccine were gone.

“I thought with all the stuff you hear, it can’t hurt,” he said.

As he waited the required 15 minutes after his shot, he received a card marked with his next appointment: March 19, same time, same place.