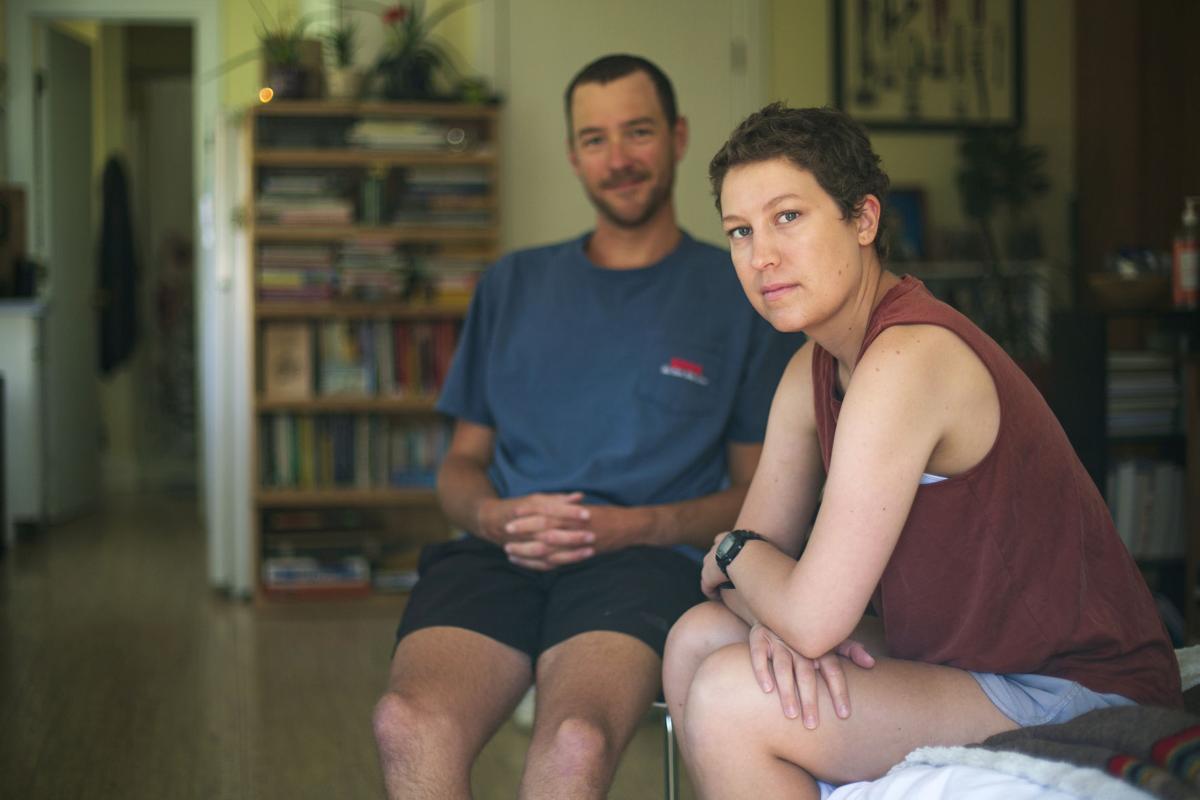 Kristen Vardanega and her partner, Taylor VanRoekel, sit inside their home Thursday, July 16, 2020, in Bozeman. Vardanega was diagnosed with acute lymphoblastic leukemia in October, and the couple rarely ventures out of the house because of the dangers COVID-19 poses to her compromised immune system. 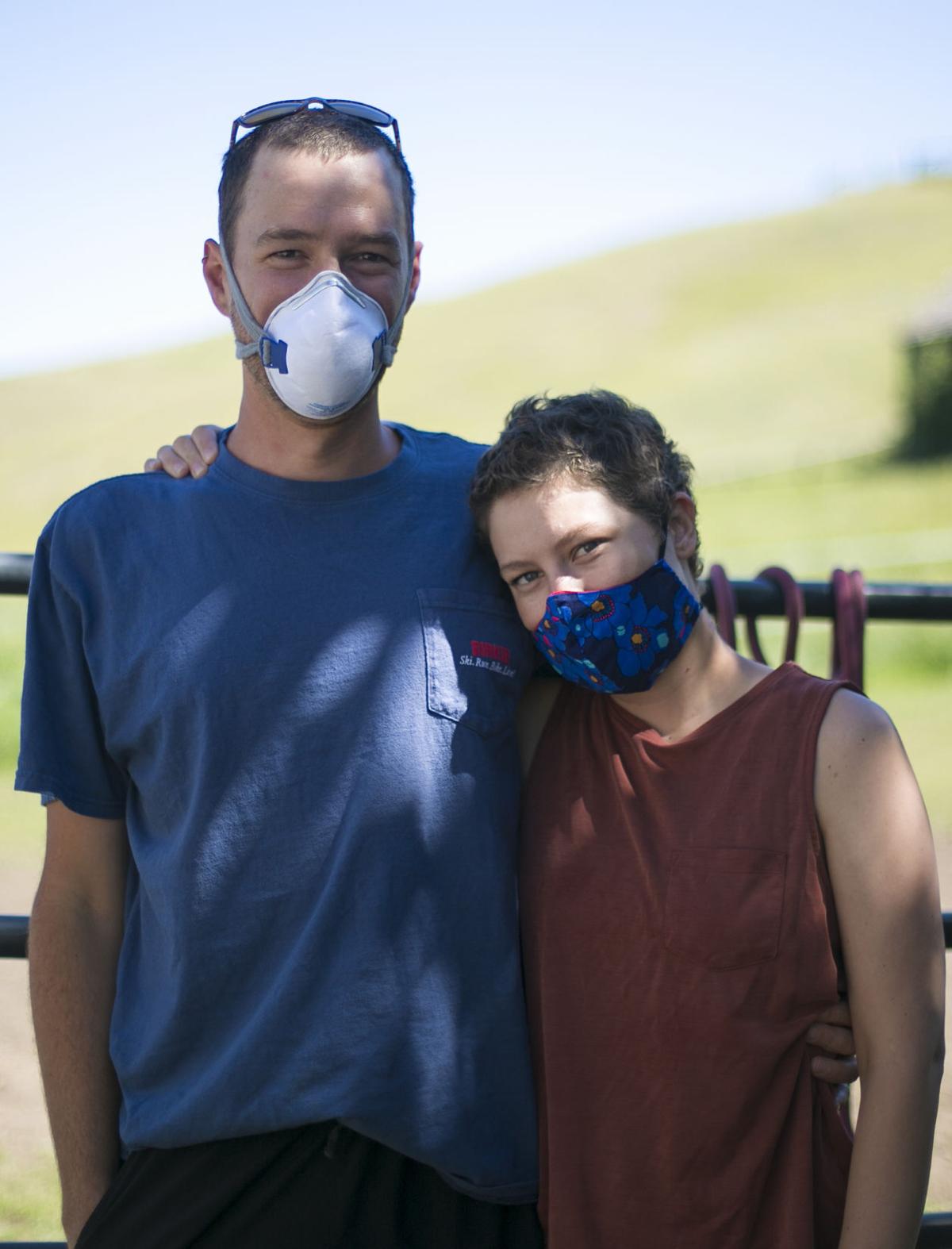 Kristen Vardanega, right, and her partner, Taylor VanRoekel, pose for a portrait at their home Thursday, July 16, 2020, in Bozeman. Vardanega has been immunocompromised since being diagnosed with acute lymphoblastic leukemia in October.

Kristen Vardanega and her partner, Taylor VanRoekel, sit inside their home Thursday, July 16, 2020, in Bozeman. Vardanega was diagnosed with acute lymphoblastic leukemia in October, and the couple rarely ventures out of the house because of the dangers COVID-19 poses to her compromised immune system.

Kristen Vardanega, right, and her partner, Taylor VanRoekel, pose for a portrait at their home Thursday, July 16, 2020, in Bozeman. Vardanega has been immunocompromised since being diagnosed with acute lymphoblastic leukemia in October.

Kristen Vardanega became an expert at living in quarantine months before everyone else.

When the 26-year-old was confined to a hospital room last fall, she found ways to pass the time. She listened to every episode of the podcast “This American Life” and took long naps, which is about all she had energy for. She got in the habit of washing her hands often and putting on a medical mask before stepping into the hallway.

It was a stark contrast from her day-to-day life in Bozeman where she studies public health at Montana State University and spends as much time outdoors as possible.

But she didn’t have any other option.

Vardanega was diagnosed last fall with acute lymphoblastic leukemia, a fast-growing cancer that affects a person’s blood and bone marrow. She went through chemo, immunotherapy and a bone marrow transplant. It wiped out much of her immune system.

Vardanega was told she was so immunocompromised during treatment that she couldn’t go outside for fear that she would inhale some microscopic particle that could cause an infection. She was told an infection like that could kill her.

Vardanega was diagnosed Oct. 8 and began treatment two days later. By January, she was in a weak state of remission. In February, she got new bone marrow from an anonymous donor. By March, her body was beginning to rebuild her immune system.

Around the same time, the COVID-19 pandemic hit the United States.

Experts have warned that people who are older than 65, have pre-existing conditions or are immunocompromised are more vulnerable to contracting the virus and experiencing serious or life-threatening symptoms.

As the rest of Montana moves through a reopening plan, vulnerable people are still asked to stay home. That means people like Vardanega will be on high alert for as long the disease is spreading.

“I have not been to a grocery store since 2019. And I probably won’t go to the grocery store before there’s a (COVID-19) vaccine,” Vardanega said.

Vardanega’s immune system is so weak right now, she’s legally disabled. She counts herself lucky to live with her partner, Taylor VanRoekel, who can run all her errands. But she still needs to go to doctors appointments, and she still wants to ride her bike and play tennis.

And, because they live together, VanRoekel’s exposure is her exposure. Given the widespread community transmission of COVID-19, neither of them are insulated from risk.

That risk is heightened when people abandon social-distancing practices, gather in large groups, don’t wear masks and spread the virus among one another.

“I still depend on other people being considerate, and that’s what scares me about reopening,” Vardanega said.

Vardanega said being in the hospital opened her eyes to just how many people are sick.

The Kaiser Family Foundation released a report in April that says roughly one-third of adults in the U.S. are at higher risk of serious illness if they contract COVID-19 due to their age or underlying medical condition. That’s more than 92 million people.

Of the 92 million, about 55% are at higher risk because they are older than 65. The rest are vulnerable because they live with pre-existing conditions, which vary widely in severity.

In Montana, there are more than 317,000 adults, or 39% of the state’s adult population, at higher risk, according to the report.

Agnieszka Rynda-Apple, an immunologist and assistant professor at MSU, said that, in some cases, being vulnerable to disease is a given. People who have diabetes, high blood pressure or asthma know they are at higher risk for infection. But there are other people who have underlying conditions and don’t know it yet.

COVID-19 has proven to be a complicated disease even for people who have normal functioning immune systems, Rynda-Apple said. Otherwise healthy patients are experiencing a wide variety of symptoms and reactions that have been unpredictable. That’s only compounded for more vulnerable people.

Because Vardanega went through chemo and a bone marrow transplant, she’s left with weakened defenses against this complicated disease.

“You’re not completely helpless, but your immune system is very vulnerable,” Rynda-Apple said.

Vardanega said the scariest part of having cancer was not the possibility that she might die. It was being sick — not having the strength to use stairs, wanting to sleep all day, feeling nauseous.

Now, she hears of some people, particularly young and healthy people, who believe that because they aren’t likely to die from COVID-19, it’s not a big deal. She knows that’s not the case.

“The (COVID-19) death rate doesn’t show the real suffering ... being sick is the hard part,” she said.

Vardanega was healthy and active and never suspected she had cancer when she began to feel under the weather last September.

It felt like the beginning stages of a cold. She was tired and classes were overwhelming. After a minor fall while mountain biking near Big Sky, her legs were covered in bruises. She knew something wasn’t right.

Vardanega made an appointment at MSU’s student health clinic thinking it might be mononucleosis, and that a doctor’s note would get her out of class to rest. When she got there, she joked with the nurse practitioner that she had Googled her symptoms and the results said she had leukemia. They both laughed.

“And then two hours later she was holding my hand and she’s crying. She said ‘There’s definitely something very wrong with you,’” Vardagena.

A blood test revealed that Vardanega’s white blood cell count was around 150,000 — the normal count for a healthy woman is 4,500 to 11,000. She was told to take her blood sample to the emergency room.

A doctor at Bozeman Health Deaconess Hospital told Vardanega she likely had leukemia. Within a few hours, she was on a medevac plane with VanRoekel, headed to the Huntsman Cancer Institute at the University of Utah.

As soon as she arrived at the institute, medical staff drilled into her hip for a bone marrow biopsy. They confirmed her diagnosis at around 3 a.m.

VanRoekel said the diagnosis brought some sense of relief because leukemia is a treatable cancer. He had been thinking she might be terminally ill.

But then came a flood of uncertainty. Because the cancer was so acute, she would have to get treatment out of state. How would the couple be able to drop everything and move to Salt Lake City for treatment? And how the illness would progress?

VanRoekel said he could barely eat or sleep the first week at the hospital.

“You’re just grasping for something to control,” VanRoekel said.

Some things worked out. He was able to work remotely and stay at the hospital. The couple found friends to sublet their apartment in Bozeman. And Vardanega’s treatment got underway.

VanRoekel said he let go of the things he couldn’t control, and became obsessive about what he could. He washed his hands constantly, wore personal protective equipment while in Vardanega’s room and absorbed everything the doctors said.

After Vardanega completed chemo and immunotherapy treatments in Utah, the couple decided to transfer to UC Davis Medical Center because her parents live near Sacramento. It felt like one way to take back some control and be close to family. Vardanega had her bone marrow transplant there in February, a procedure that required more chemo and radiation beforehand and intense aftercare.

The transplant wiped out Vardanega’s immune system and gave her a brand new one that needs time to build up. Although a successful procedure, it couldn’t have come at a worse time.

News had been swirling about the spread of a novel coronavirus that emerged in Wuhan, China. It wasn’t long before COVID-19 earned pandemic status.

Cases started popping up around the U.S. and spread quickly. The first case of community transmission in the U.S., meaning a source could not be traced, was confirmed in Solano County, California.

The patient was hospitalized at UC Davis Medical Center, where Vardanega was still recovering from her transplant.

Vardanega was able to move into her parents house the first week of March, which was far more insulated from disease than the hospital.

At the time, she was anxious about the virus. But that soon dissolved into disappointment.

“I felt like I had finished treatment and so I was moving back to normal life, everything will be fine in a couple of months and I’ll start getting my old life back,” Vardanega said. “And then the pandemic happened.”

Vardanega also became frustrated when she heard how some were responding to stay-at-home mandates. People complained of having to quarantine and wear a mask, but those requirements seemed like a small price to pay to stay healthy.

“This doctor told me, Kristen, if you want to go out in the hallway or you want to go outside, you can just wear this mask. I was like ‘Great. I’m so glad there’s this piece of packaging that I can wear so I can go feel the breeze on my face during this hospital stay. This is a miracle,’” she said.

Vardanega said she understands the pandemic has been challenging for everyone and why people are uncomfortable living with restrictions. But she also doesn’t want to live under lockdown, and the virus spreading makes that necessary.

VanRoekel feels the same frustration and anger. He said when the virus arrived, he was convinced that officials would take control of the situation and prevent further spread. He’s lost faith that will happen.

“I’m much less fearful of the disease now than our response not containing the virus,” VanRoekel said.

For one thing, VanRoekel said, officials should have required wearing a mask in public a long time ago. He said a society’s strength should be measured by how well it takes care of its most vulnerable members.

“Our leaders, our elected officials, work for us, for their constituents. It doesn’t matter if a data-driven public health mandate is going to be unpopular,” VanRoekel said.

Meanwhile, Vardanega is doing all she can to protect herself. She works from home and only leaves to ride her bike and exercise. She’ll likely petition to take all of her college classes online in the fall. She has strict rules for friends who visit, and doesn’t see those who’ve had possible exposure to the virus.

Vardanega said she’s just as uncomfortable living this way as anyone else is with quarantine. It’s not a sustainable lifestyle. She can only hope that people will make personal decisions that curb the spread of COVID-19 and make it possible for her to return to some semblance of normalcy.

“The logistics of life don’t afford me the opportunity to stay at home indefinitely,” Vardanega.