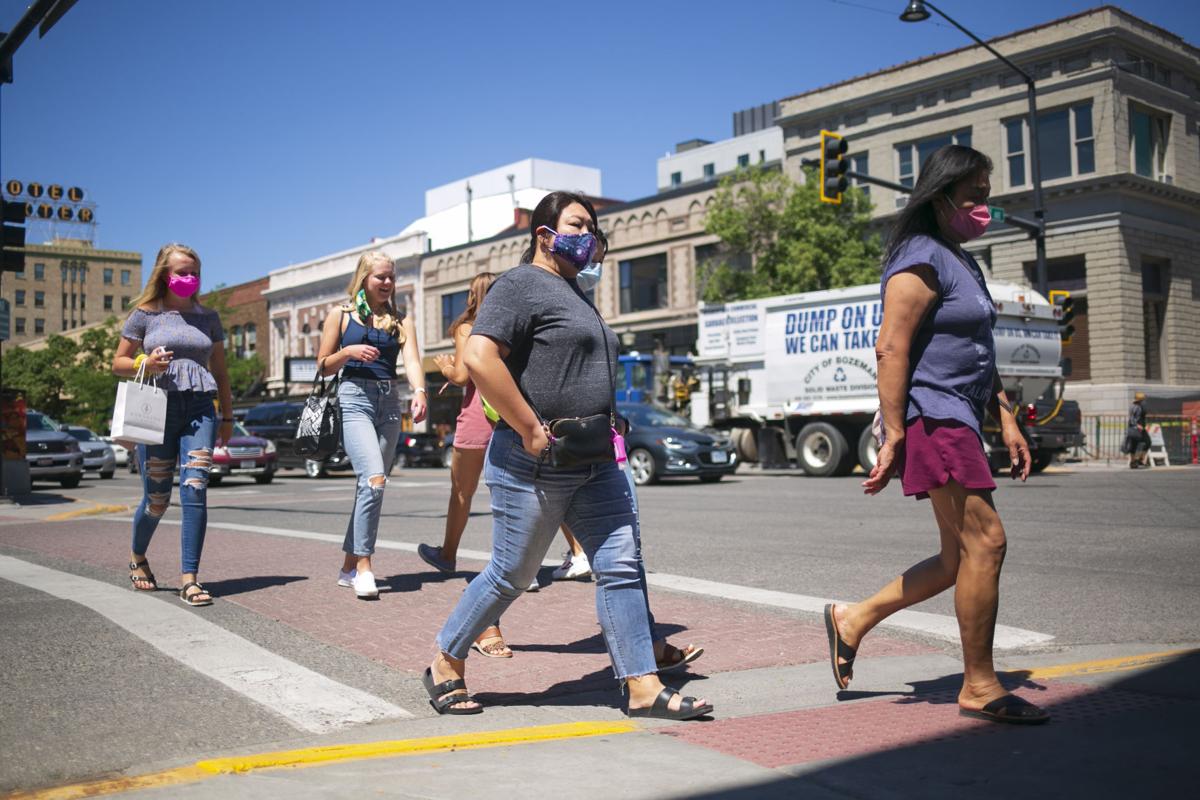 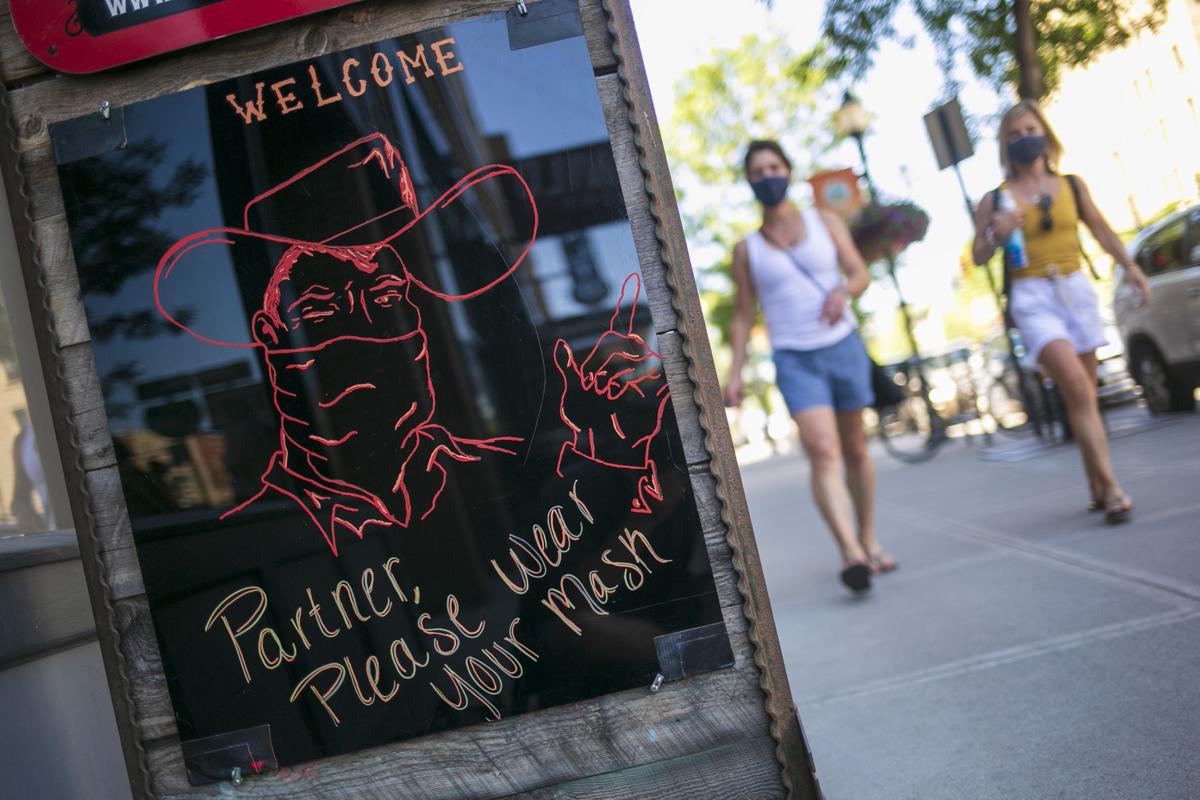 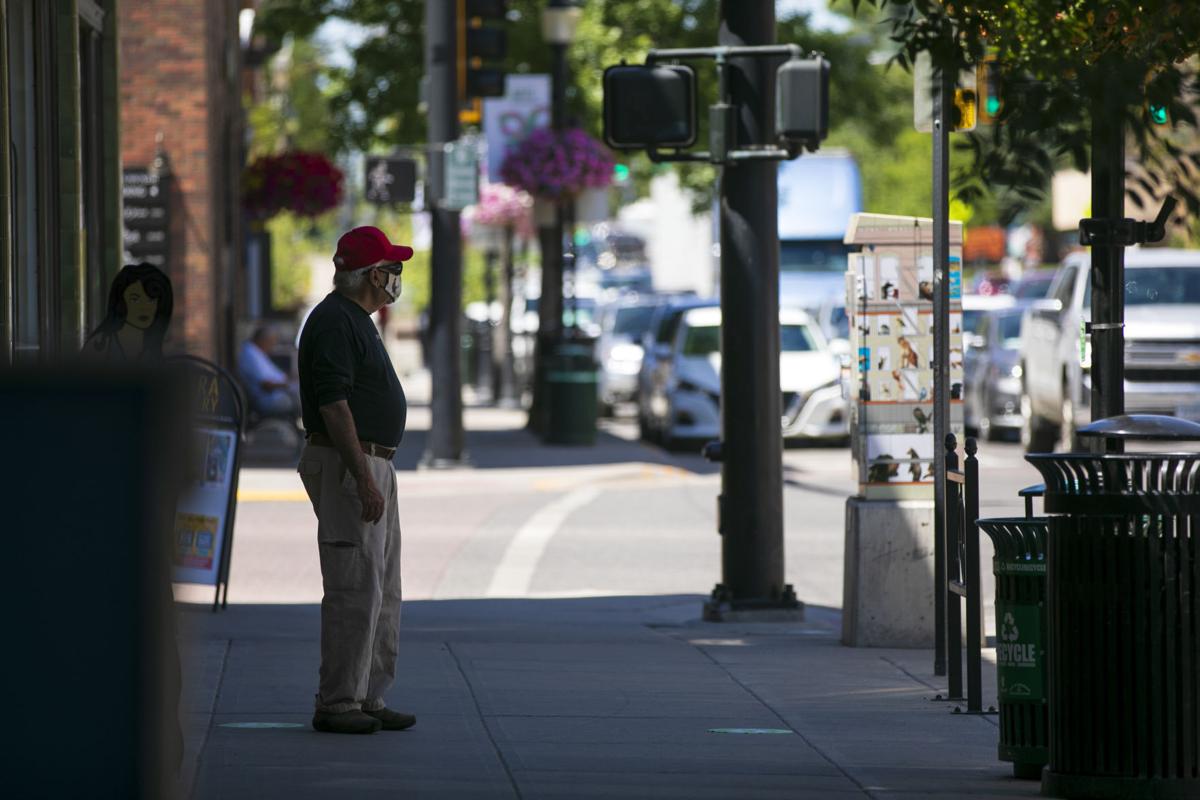 A man wears a mask while standing on the sidewalk in downtown Bozeman Thursday, July 16, 2020.

A man wears a mask while standing on the sidewalk in downtown Bozeman Thursday, July 16, 2020.

The Gallatin City-County Board of Health has again postponed its meeting on a local mask mandate.

Board members will instead meet next week to ensure they comply with the state’s public notice requirements, according to a county news release.

The board initially met Tuesday to decide whether to require masks in the county but postponed the meeting until Friday because some attendees refused to listen from another room in violation of state limits on large gatherings.

Gov. Steve Bullock then issued a statewide mask order on Wednesday, largely taking the decision out of boards’ hands.

Now, the board and its lawyers are reviewing the statewide rule and determining how to proceed with a local rule. The board could choose to follow the statewide rule, or it could implement more strict local requirements.

For instance, the state order doesn’t include penalties for not wearing a mask. Instead, businesses can ask people to leave if they do not comply and may call law enforcement, which could issue citations for crimes like trespassing or disorderly conduct.

The rule the board had planned to discuss on Tuesday states that violation of the local mask mandate is a misdemeanor.

Gallatin County Sheriff Brian Gootkin said on Thursday his office won’t issue criminal citations to violators and will instead attempt to educate those involved.

“I have no interest in issuing citations or taking people to jail,” he said. “Everyone is fixated on the enforcement, but we haven’t had to do that in Gallatin County, and I don’t foresee that being an issue. … Our job is to keep the peace and that’s what we’ll be doing.”

The state mask rule also exempts schools, while the proposed local rule specifies that those older than 12 must wear masks in schools.

The board will accept public comment by email or through a form on the Gallatin City-County Health Department’s website until next week’s meeting.

The meeting will be virtual. Information on how to participate by phone or video will be available on the health department website.

More than 100 people attended Tuesday’s meeting at The Commons at Baxter and Love. The board didn’t limit the number of people allowed inside, even though state regulations prohibit gatherings of more than 50 people if they aren’t socially distanced.

Gootkin told some people to move to another room, where the meeting was being broadcast, and wait for their turn to speak. Attendees refused to leave, so the health board ended the meeting.

Well over 1,000 residents have sent comments to the board on the proposed local rule, including many since Tuesday’s meeting was rescheduled.

Commenters against the mandate said it threatens their civil liberties and would harm the economy. They also maintain the scientific evidence on their benefits isn’t conclusive and concerns about COVID-19 are overblown.

Those who support a mask mandate cited advice from the Centers for Disease Control and Prevention and research that indicates widespread mask use can slow the spread of the virus. They also said masks are a less stringent way to limit transmission than other measures like closing businesses.

Before Bullock issued a statewide mask requirement, a handful of Montana counties, including Big Horn, Missoula and Flathead, enacted their own rules.

For weeks, Bullock said he supported the local efforts but didn’t issue a statewide order. Instead, he encouraged people to wear masks. On Wednesday, he said given the rise in COVID-19 cases in Montana and the number of people who continued not to wear masks, it had become clear that a mandate was necessary.

The state’s mask requirement applies to counties with at least four active cases, meaning, as of Thursday, it covered about half the state’s counties, including Gallatin County.

In those counties, masks must be worn in public indoor settings and at outdoor gatherings of 50 or more people who aren’t socially distanced.

Masks are not required in several circumstances, including for children younger than 5, for people with certain medical conditions, for those eating or drinking at businesses that sell food or drinks and for those participating in activities where masks could be unsafe like strenuous exercise.

The mask mandate comes as Montana continues to see a rise in COVID-19 cases.

On Thursday, health officials announced two more deaths from COVID-19 in Montana. A man in his 70s died early Thursday at Canyon Creek Memory Care in Yellowstone County, and Lewis and Clark County announced its first death due to complications from COVID-19, a person over the age of 65. No other information on the person was released.

Thirty-six Montana residents have died of the respiratory virus, including 16 who were residents of long-term care or assisted living facilities. Thirty-seven people remain hospitalized. Twenty-four of those hospitalizations are in Yellowstone County.

The state reported 134 new cases on Thursday, bringing the statewide total to 1,226 active cases. The state has had a total of 2,231 cases.

Gallatin County reported 23 new cases on Thursday for a total of 140 active cases and two hospitalizations. The county has had a cumulative total of 552 cases.