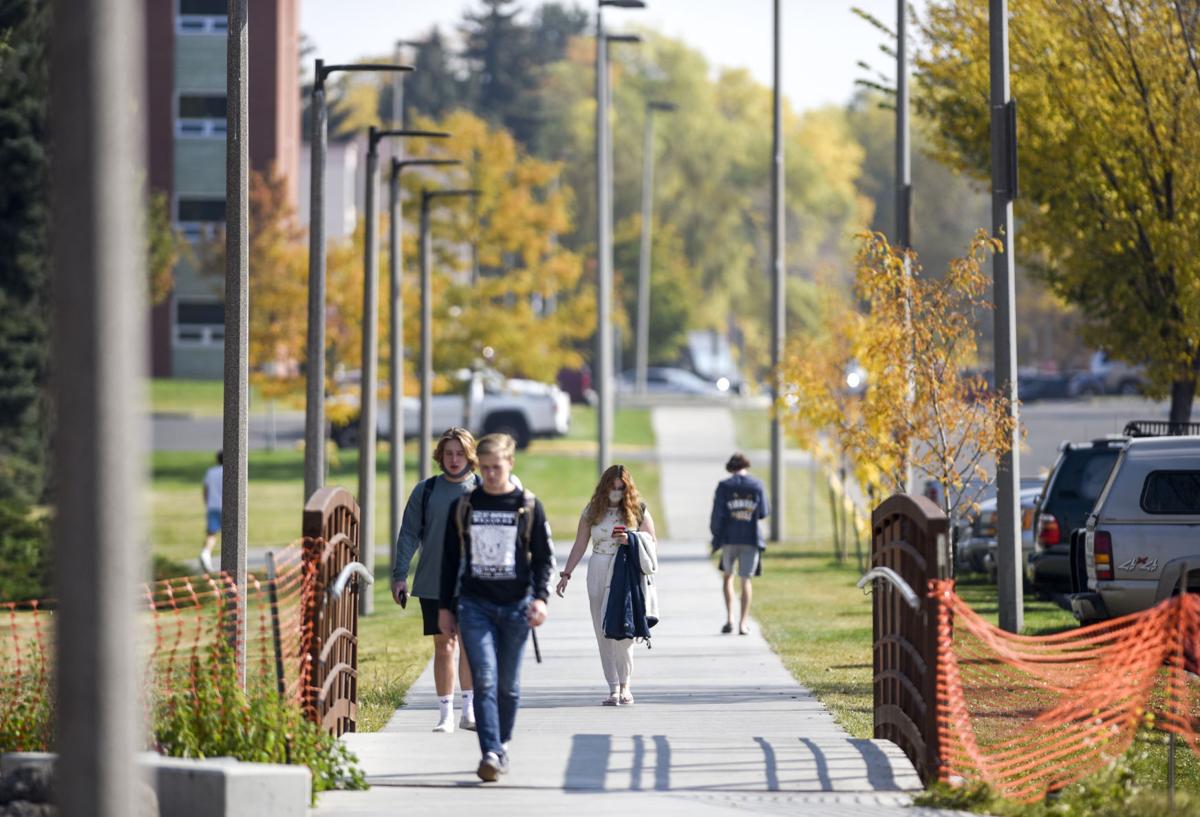 Montana State University students walk back to Hyalite Hall after class gets out on Friday afternoon, Oct. 9, 2020. There were 60 new cases connected to Montana State University reported this week for a total of 217 associated cases since Aug. 1, according to the report. It’s a 38% increase in total cases from the previous week. 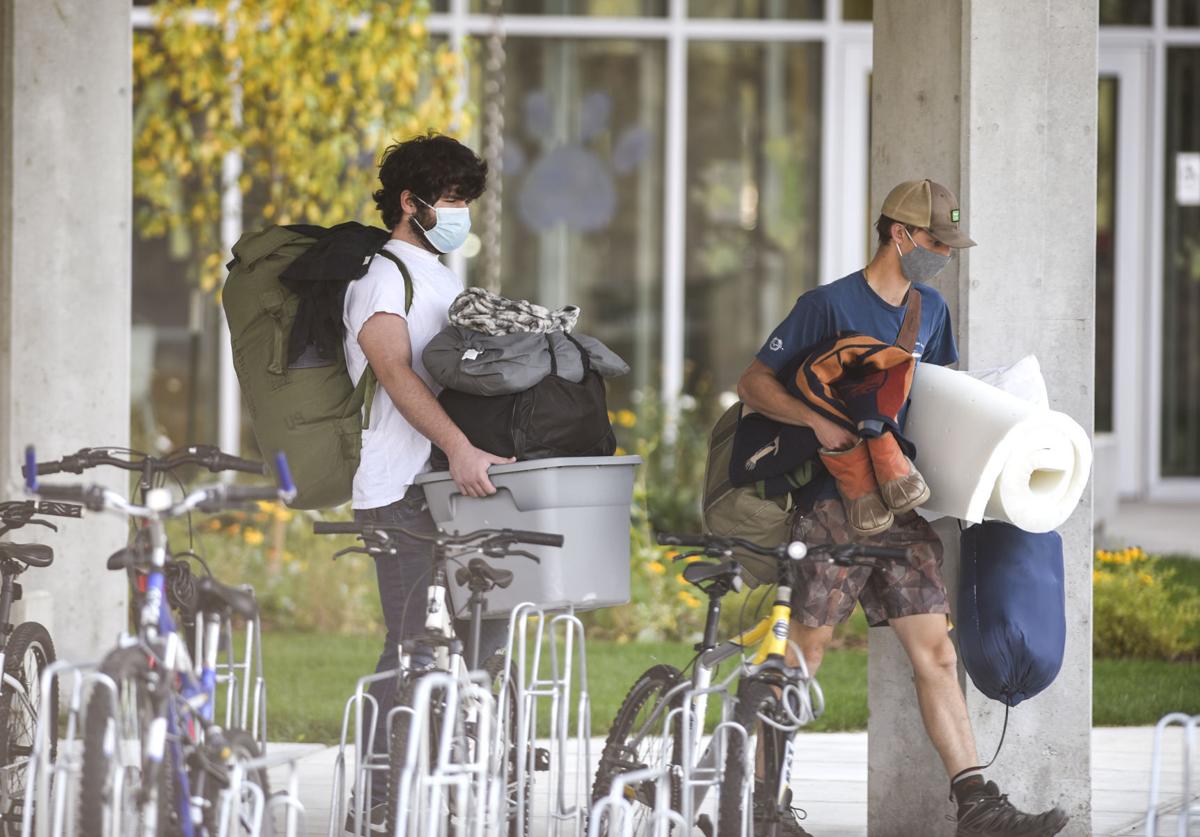 Montana State University students walk back to Hyalite Hall after class gets out on Friday afternoon, Oct. 9, 2020. There were 60 new cases connected to Montana State University reported this week for a total of 217 associated cases since Aug. 1, according to the report. It’s a 38% increase in total cases from the previous week.

Gallatin County cases of COVID-19 have continued to escalate, with the health department stressing the impact high cases has on its ability to contact trace.

There were 61 new COVID-19 cases in the county on Friday, one of the highest single-day counts, while Montana State University cases have remained relatively stable from last week.

“This high number of cases for this period of time does degrade our capacity to reduce disease transmission,” said Gallatin City-County Health officer Matt Kelley during a press conference on Friday.

The seven-day rolling average of daily cases per 100,000 residents was about 37 cases on Thursday, an increase of 40% from 26 cases on Oct. 1, according to the county’s weekly surveillance report.

“This is not where we wanted to be headed into cold and flu season,” Kelley said. “We’ve maintained the trend we saw in August, and further into the fall it sets us up for potential problems.”

He said the seven-day rolling average for the rate of positive cases has held steady from last week, around 8.9%.

“It’s good it’s not going up, but it’s still uncomfortably close to 10%, which is where you worry you’re having a growth that is outpacing your capacity,” he said. “We would really like for this to be under 5%.”

Kelley did highlight one piece of good news – the test results are still coming back quickly with a turnaround of a day or two. He said it would be important to maintain the rapid testing headed into the winter to “differentiate from what’s COVID and what’s cold and flu.”

While test result time remains steady, the consistently high cases have put a strain on the health department’s ability to rapidly and thoroughly contact trace. Kelley said when the county is routinely reporting 40 to 60 cases per day, it limits how much contact tracing the department can do.

He said the contact tracers are unable to spend as much time with each case, which makes it more likely those close contacts become positive cases and unknowingly spread the virus.

“We’re working hard, we’re adding capacity, but we do have to change how we work when we see over 40 cases a day,” Kelley said. “That’s pretty significant and that’s pretty taxing on our system.”

There were 60 new cases connected to Montana State University reported this week for a total of 217 associated cases since Aug. 1, according to the report. It’s a 38% increase in total cases from the previous week.

But there was a 19% decrease in the number of active cases this week, with a total of 34.

“That’s significant,” Kelley said of the 60 new cases. “But I wouldn’t say that’s out of whack with what we’re seeing in the community.”

While the university is not releasing the number of students in quarantine, Kelley said, “Their housing situation is pretty good right now. They’re not running through (quarantine) capacity.”

Four people have died from COVID-19 complications in the county, and there have been 1,869 total cases. There are nine current hospitalizations.

As of Friday, Bozeman Health Deaconess Hospital had 60% of critical care beds occupied and 53% of non-critical care beds occupied. Kelley said that number fluctuates day-to-day, but it’s part of what the county is monitoring. He said as hospitals in Billings and Great Falls become filled, it is important to understand how that can impact sister hospitals like Bozeman.

“We’re keeping our eye on it, as we think about how to deal with future restrictions,” he said. “If we start seeing numbers in the hospital start pushing the capacity of the hospital, that’s going to put some pressure on us to do some new things.”

The increased cases have already started to impact public services.

Statewide cases also continued to rise this week, with two record-breaking new daily cases reported this week. On Tuesday, the state reported a record of 504 cases, only to be broken the next day with 733 new cases.

The numbers remained high on Friday, with 715 new cases reported. The state also reached over 200 deaths due to COVID-19 this week. In a statement on Friday, Gov. Steve Bullock, said at the end of July there were 60 coronavirus related deaths.

“Today, barely into October, over 200 Montanans have been taken from their families, friends and communities,” Bullock said in a statement. “That is over a 230% increase in deaths in just over two months.”

“The most important thing we can do as a community is avoid crowds, wear face coverings, wash our hands, stay home if we’re sick and avoid places where social distancing is difficult. If we can get everyone to do that, we have an opportunity to bring down the cases,” Kelley said.