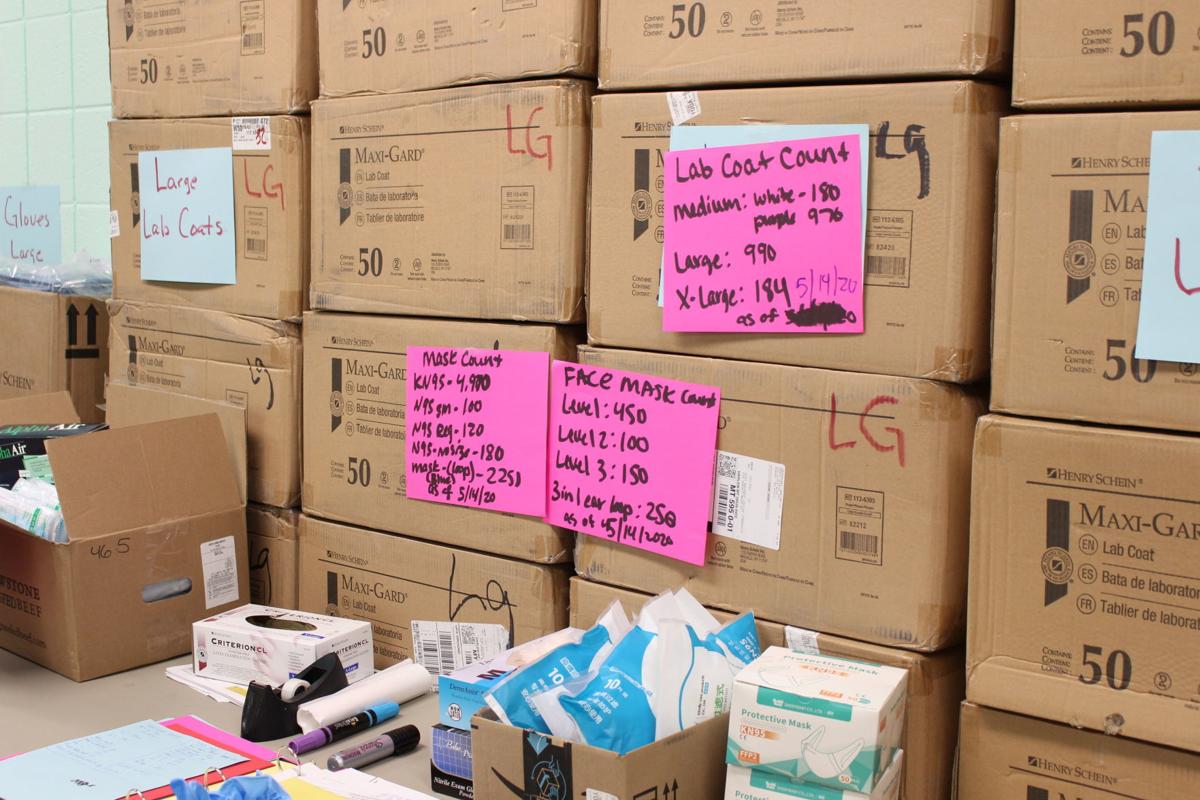 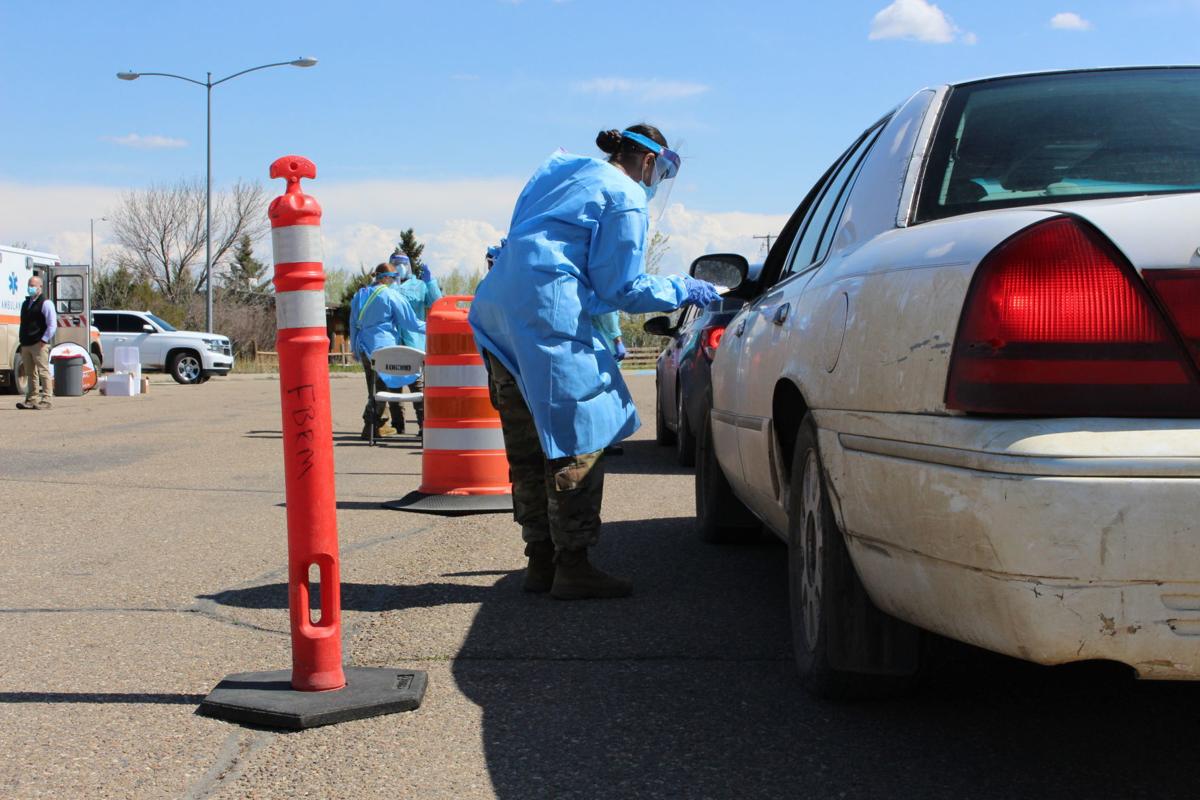 A worker gathers information before conducing a test for COVID-19 at a two-day drive-thru testing site in Fort Belknap Agency. 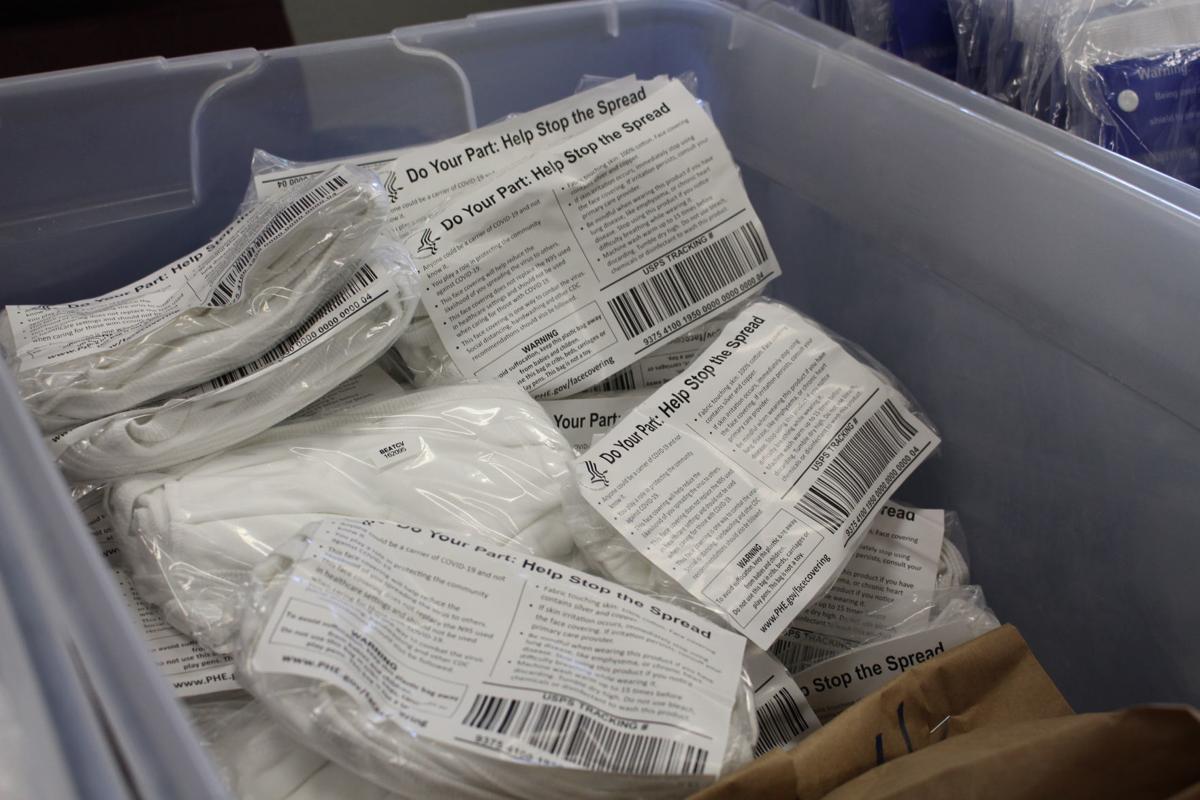 The Fort Belknap Indian Community has aggressively worked to increase its supplies of face masks, gloves and other protective equipment to provide to health workers and the community. 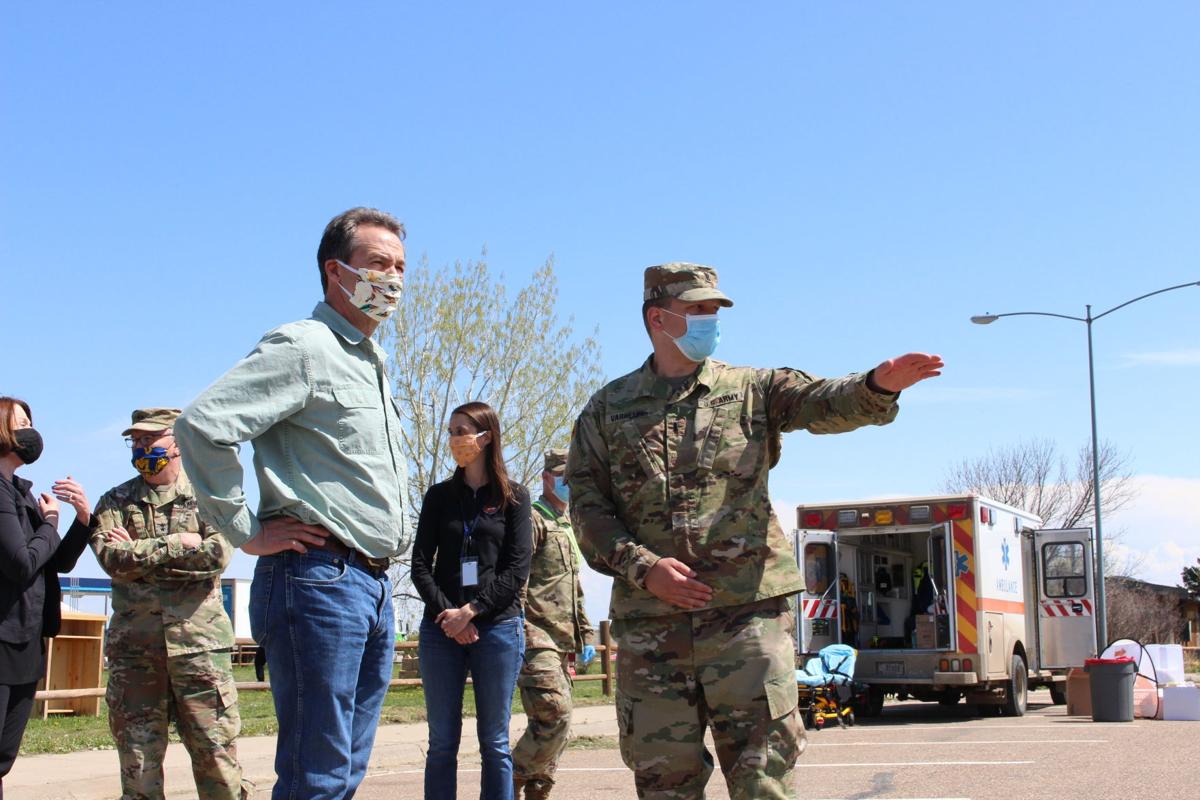 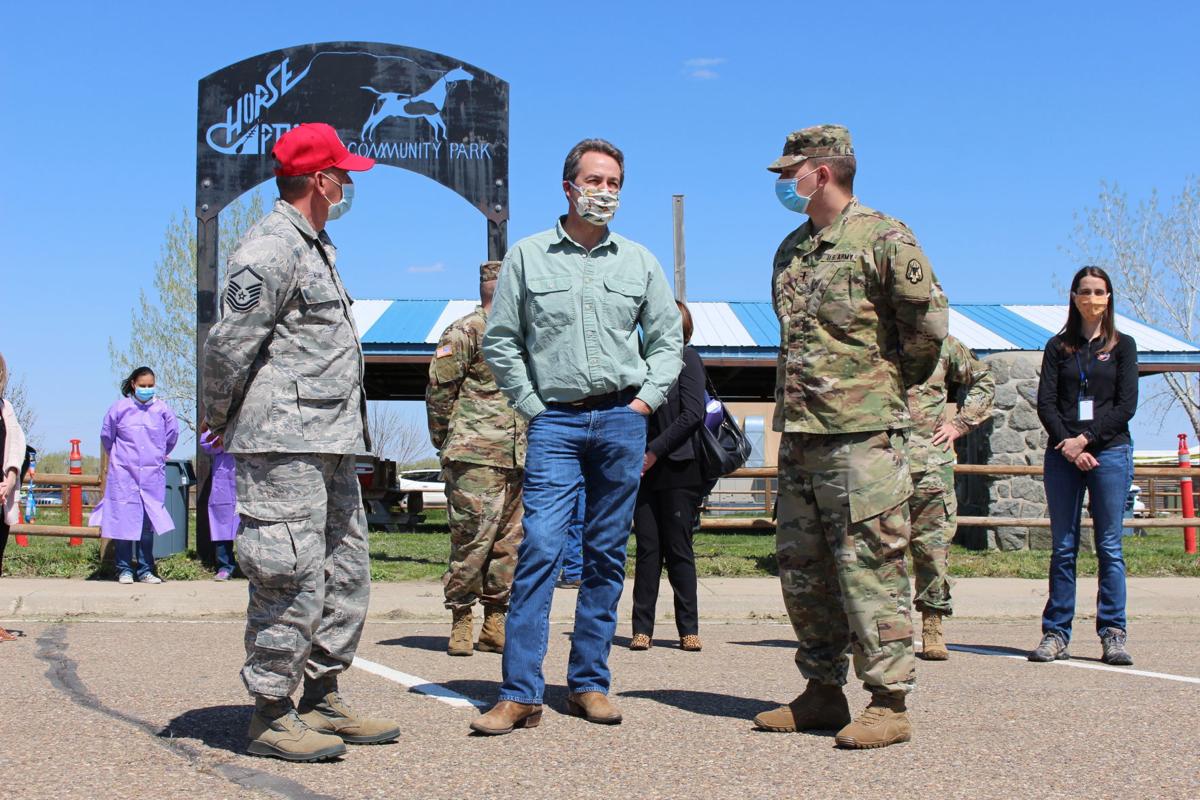 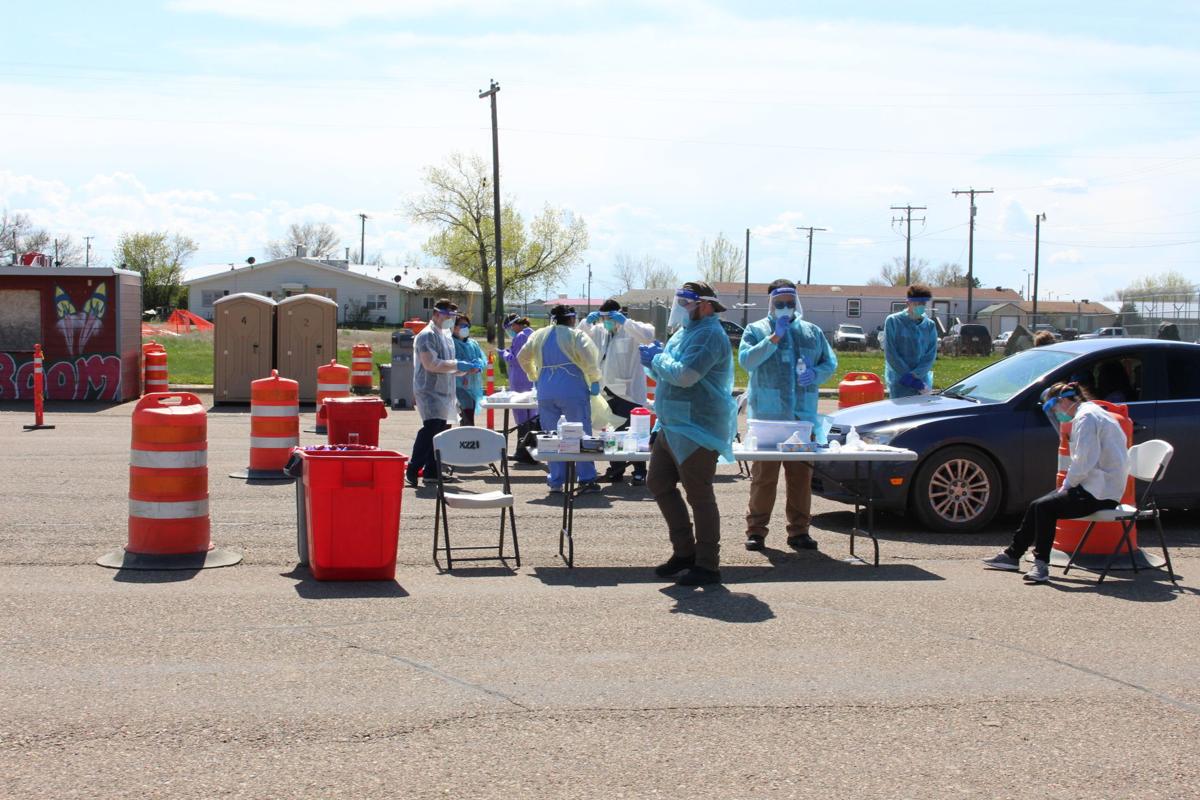 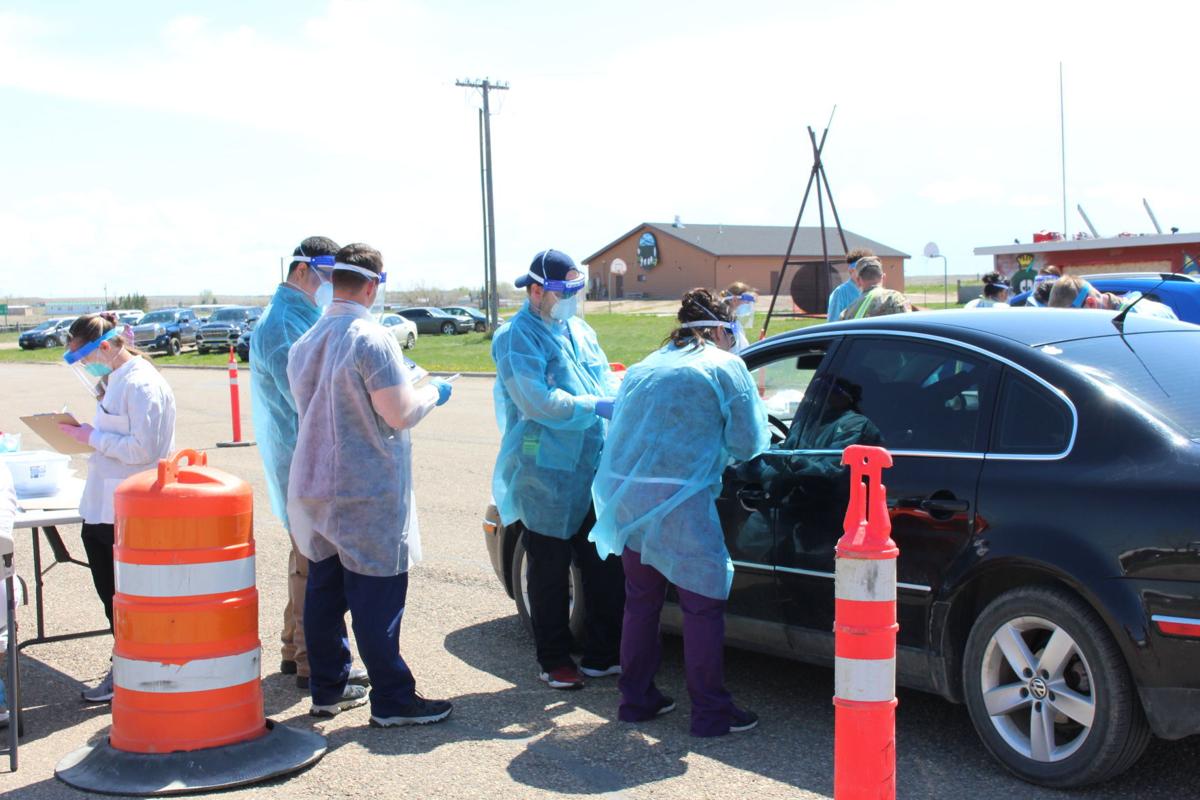 Public health workers talk to a person who came to be tested at a two-day surveillance testing site at Fort Belknap Agency.

The Fort Belknap Indian Community has aggressively worked to increase its supplies of face masks, gloves and other protective equipment to provide to health workers and the community.

FORT BELKNAP AGENCY — In a world that seems to have far more questions than answers lately, tribal health worker Jennifer Show is anxious for information.

Before Friday, Indian Health Services had tested only 37 symptomatic members of the Gros Ventre and Assiniboine tribes. All the tests came back negative for the novel coronavirus.

But what about the possibility of asymptomatic spreaders? What’s the prevalence of the virus in nearby communities? How successful has a stay-at-home order been?

The list of unknowns is long, but Show expects to get some of the most critical answers she’s seeking from two days of enhanced drive-thru surveillance testing at Horse Capture Park here.

Friday was the first day, and by Saturday evening more than 1,000 people had been tested at the operation run by a coalition of tribal, local, state and federal agencies.

“It gives us a snapshot in time. It’s going to let us know of possible asymptomatic spreaders, which will be interesting. It will give us an idea of how our measures we took to contain the virus worked for us on the reservation,” Show said.

“Yes, it’s just a snapshot in time. It doesn’t mean they couldn’t get it later. But we know for that time they are testing negative. Hopefully we don’t have that many positives.”

On a warm spring day, Show and others watched a steady stream of vehicles with license plate numbers beyond just the 24s of Blaine County pass through. A second test site in Hays also operated Friday.

Some came alone while others brought family members to be tested. From check-in to administering a nasal swab and driving off, the process took less than 10 minutes for each person.

Given how interconnected Hi-Line towns are and how quickly the virus can spread, boundaries mean a lot less these days to public health officials. Testing at the site, though it was on the reservation, was open to anyone enrolled in the tribe or not.

As geographic lines have become less important, so have the demarcations between governmental agencies.

Werk said the tribe, in consultation with Indian Health Services, developed and passed a resolution to establish their own testing protocol. That happened as Bullock, at the state level, crafted a framework to dramatically ramp up Montana’s testing to 60,000 a month. By Saturday, slightly more 26,000 Montanans had been tested since March.

Just six days before the Fort Belknap testing site opened, Werk and Bullock were talking in a Saturday morning phone call about testing goals and decided to move from discussion to action. Though he and Bullock communicated regularly before the pandemic about other issues, Werk said the risks posed by the virus have fast-tracked many things such as setting up the testing operation.

“We decided, ‘Let’s just do it.’ Let’s look at a collaboration with an initiative up here and a model testing effort,” Werk said.

Montana is in Phase 1 of a gradual reopening that means loosened regulations and more people moving around. While Fort Belknap has kept a stay-at-home order and curfew in place, tribal health officials accept the fact that increased travel to and through the reservation is unavoidable.

In most of the rest of the Montana, retail stores, bars, restaurants, breweries, gyms, theaters and more can open at half capacity. While those financial transactions will boost the state's hard-hit economy, they also facilitate transmission of the virus.

At some point, as Bullock has emphasized in regular calls with local media, that spread becomes normal. An amount of Montanans will likely test positive for COVID-19, possibly every day for the foreseeable future. That’s the world we live in now.

“Part of it is the science of trying to understand what’s happening, but then it’s also asymptomatic and pre-symptomatic carriers,” Bullock said. “As we do that, we’ll not only have a better sense of what the virus is, but we’ll be able to quickly isolate and quarantine when we find them.”

The governor’s plan to re-open the economy is in concert with setting the benchmark of conducting 60,000 tests each month. That framework focuses, at first, on segments of society where the virus can bring increased risk, such as nursing homes, congregate settings and tribal communities.

Reservations are a part of the approach because the the higher prevalence of people with pre-existing health conditions, a lack of health care availability, overcrowded housing, long-term, systemic economic challenges and more.

“It is a real priority for me and for us in Indian Country because we know that COVID-19 is more risky for both our older Montanans and those with health care compromises, and with the amount of multi-generation living in our tribal nations,” Bullock said.

“Every household here is at risk,” Windy Boy said. “Every household is going to have someone that has complicated chronic health issues. It goes back to historical trauma. When you look at everything our people have endured, that has changed our history. The other part is we've only been (on this reservation) about 100 years and we’ve changed our lives dramatically in those 100 years. It’s really hard on your body to assimilate and adapt to that.”

The coronavirus is highlighting systemic shortcomings that have harmed Indian Country for generations, Windy Boy said. That includes mental health care. In a state that leads the nation in suicides per capita, rates are even higher on Montana's reservations. Then COVID-19 forced more isolation in areas that were already remote. That comes with devastating effects.

“We’ve had a huge uptick in suicide ideations. Since this started we’ve had two completions,” Windy Boy said.

Failures by the federal government to fund Indian Health Services created a system where Native people don’t seek health care until they’re gravely ill, because it’s not always clear if it will be available, Windy Boy said. To combat the coronavirus, that will need to change.

“That’s not how we have traditionally interacted. IHS has trained Indian people that we don’t have money for much. We only do what is immediately needed and that’s how we have trained people. We’ve trained them to come in when they’re sick. That’s generational that we’ve trained people like that. We’re looking at how do we change that relationship with health care,” Windy Boy said.

The high turnout at the testing sites didn't happen by accident. Windy Boy said there was an aggressive advertising campaign through local media and social media and electronic highway signs on U.S. 2 — all boosted by $20 gas cards for those who came.

Once the testing wraps up, tribal heath director Karen Yazzie and her deputy Tammy Rider said they’ll sit down to compile information about what was successful and what can be improved about the process to share with communities around the state. They want to fine-tune operations for future rounds of testing and have a model to administer a vaccine when it becomes available.

The next thing Show would like to see is antibody testing for the community, once it is reliable.

In December and January, Show said a handful of people were really sick on the reservation but didn’t know what it was. That was before there was widespread awareness of COVID-19 in the U.S.

“Has it already gone through here? We don’t know. There’s so much unknown about this particular virus. But this surveillance testing is a good snapshot in time," Show said.