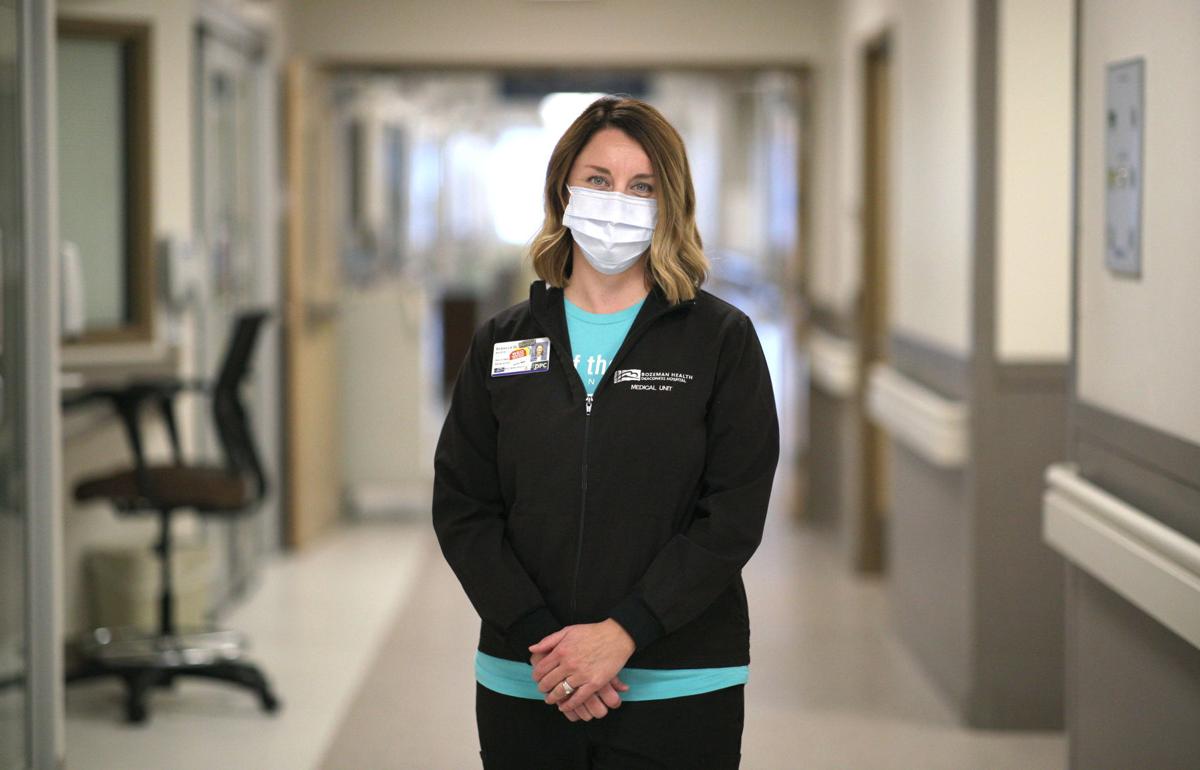 Rebecca Williamson, the nurse manager of the medical unit, stands in the hallway of the critical care unit, where most of the COVID-19 patients in critical condition are treated, on Nov. 11, 2020, at Bozeman Health Deaconess Hospital. 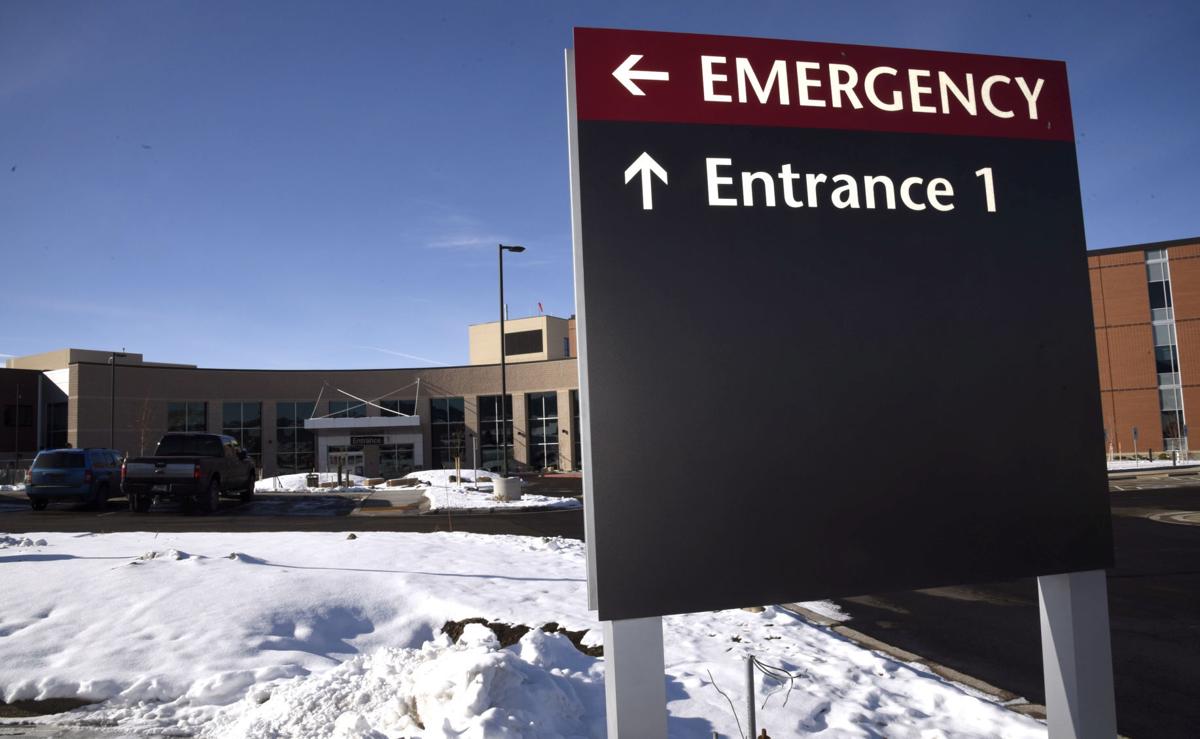 A sign directs visitors to the emergency room on Thursday, Nov. 12, 2020, at Bozeman Health Deaconess Hospital.

Rebecca Williamson, the nurse manager of the medical unit, stands in the hallway of the critical care unit, where most of the COVID-19 patients in critical condition are treated, on Nov. 11, 2020, at Bozeman Health Deaconess Hospital.

A sign directs visitors to the emergency room on Thursday, Nov. 12, 2020, at Bozeman Health Deaconess Hospital.

Nurses layer themselves in protective gear. They’re cautious about what they touch before and after going into a patient’s room.

Days feel longer. They actually are, sometimes, with shifts lasting as long as 14 hours.

The shifts do eventually end. But then, outside the hospital, the virus remains a major force in nurses’ lives.

“You just feel like you can’t get a break,” said Rebecca Williamson, medical unit manager at Bozeman Health Deaconess Hospital. “Because no matter where you are, you are connected with all of this in some way or another.”

With cases surging again, workers at the Bozeman hospital are feeling the strain of the pandemic. Williamson manages 110 nurses and works with other department managers in the hospital. She said working there for the past nine months has been the biggest challenge of her life. She said the hospital has adequate capacity and great resources, but nurses and medical staff are emotionally and physically exhausted.

Hospitals in the state and across the country are facing similar issues as most areas are seeing a surge in virus cases greater than any spike since the pandemic began in March. As health officials continue to urge people to wear masks, social distance and wash their hands, health care workers continue to see the havoc caused by the illness every day at work.

This past week, Montana hit a record for the number of people hospitalized in the state because of the virus, said Greg Holzman, the state’s chief medical officer.

“The current stress on our public health and health care system right now is real,” Holzman said at a news conference on Thursday. “Health care workers are becoming stretched and public health departments cannot keep up with contact tracing.”

Hospital capacity in Gallatin County has hovered around 80% for the past week, according to reports from the state’s coronavirus task force. A handful of counties have either hit capacity at some point in the past week or had patients occupying more than 90% of beds.

Meanwhile, nurses at Bozeman’s hospital have had to quarantine because they were considered close contacts to someone outside of the hospital with the disease.

Dr. Mark Williams, the hospital’s chief physician officer, said having health care workers exposed to the virus outside of the hospital is impacting the number of workers available to treat patients at the hospital.

“It’s extremely frustrating for our health care team members to witness the impact of COVID inside the hospital and then step out in the community and see what’s happening,” Williams said, “which often appears to be somewhat of a disregard for personal health and safety.”

Hospital officials this week began asking employees who are asymptomatic and would otherwise be quarantining to come back to work to keep the hospital running. Health officials said these aren’t people who have tested positive for the disease. The contingency staffing is done in coordination with the Gallatin City-County Health Department and guidance from the Centers for Disease Control and Prevention.

Kallie Kujawa, who is leading the COVID efforts at the hospital, said those employees are asked to come back to the hospital after quarantining for seven days. If they’re willing, she said, the hospital takes additional infection prevention measures including testing, checking for symptoms every six hours and having the employees eat lunch away from other employees.

Kujawa said the hospital planned for potential staffing constraints early in the pandemic.

“We are majorly experiencing those constraints right now,” she said.

Hospital officials said it has the capacity to deal with COVID and non-COVID patients and the team has plans if it ever hits capacity. They urge people to get care as needed. An expansion of the hospital that was built over the summer has helped keep up with the demand.

However, concerns remain about the uptick in cases in Gallatin County and across the country.

Kujawa said the hospital has enough beds to deal with patients, but it could be extremely challenging if it doesn’t have enough staff to care for those patients. She said nurses are burning out.

“It’s very tough all around for everyone,” Kujawa said.

Williamson said it’s exhausting for nurses to keep up with the constant policy and procedure changes meant to keep everyone safe from the virus — there have been 300 changes in the past nine months. A majority of the changes are in everyday practices at the hospital like collecting samples, getting ready for shifts and keeping COVID patients away from non-COVID patients.

“It’s not that we’ve had to come up with huge complex changes that everyone’s having to memorize, it’s that everything that’s normal has been changed,” she said.

Williamson and other managers are constantly checking on employees, making sure they’re getting rest outside of work and letting people take time off as needed.

Williamson grew up in Ammon, Idaho. She said she got interested in nursing after seeing first responders help people involved in farming accidents.

When she was young she volunteered at a hospital in Idaho Falls and learned that she wanted to do more. She became a certified nurse’s assistant after taking classes in high school. After nursing school and before moving to Bozeman, Williamson worked as an ICU nurse in Salt Lake City, Utah.

She never imagined she’d work through a pandemic, sacrificing many hours away from family, but she said she’s proud of what she’s doing. She said it’s made her feel like a “team mom,” taking care of her employees and keeping them safe and healthy. Sometimes she’ll send an employee a card to let them know she’s thinking about them.

Throughout the pandemic, nurses like Williamson have seen the affects of the virus inside and outside of the hospital “every day, all day.”

It’s been a long nine months. Many nurses have gone without breaks. And health officials have advised that if we don’t respond to the virus now some of the darkest days could be before us.

“This has been a marathon and it’s not ending — there’s no end in sight,” Williamson said.

Correction: This story was updated Nov. 16 to correct the title of Mark Williams. He is the hospital's chief physician officer.