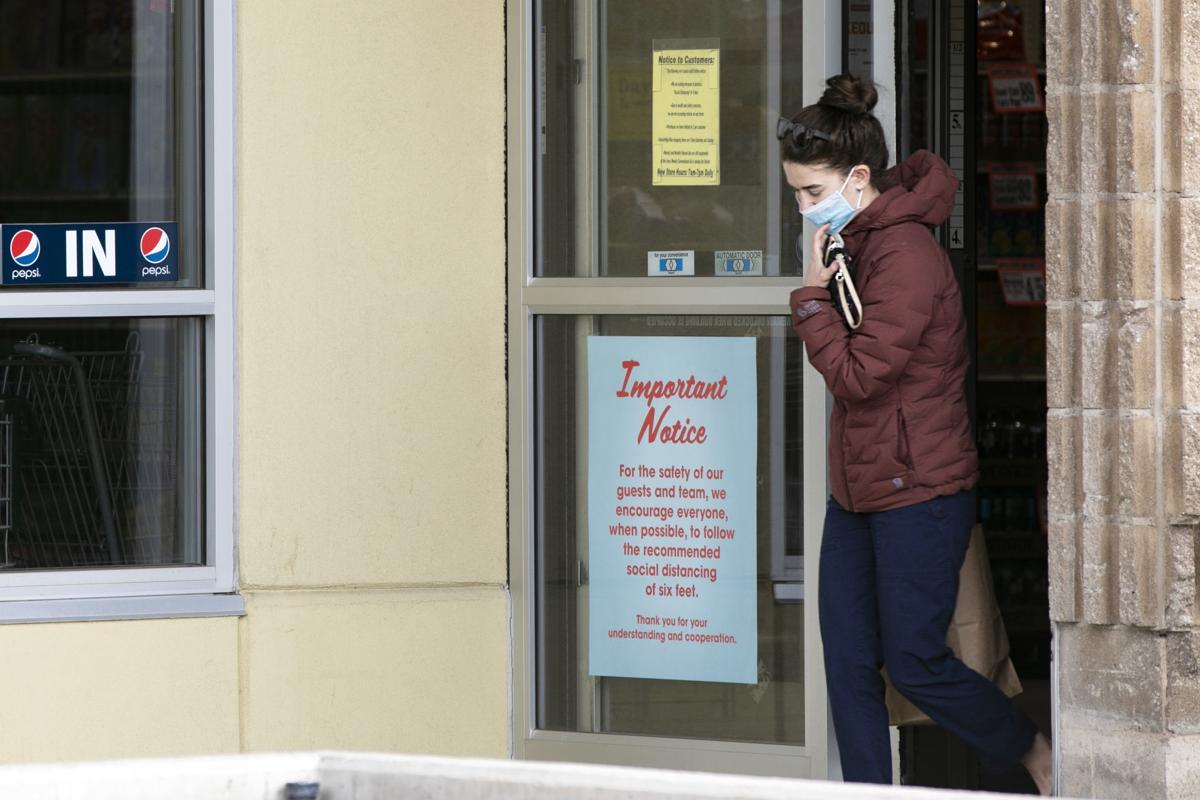 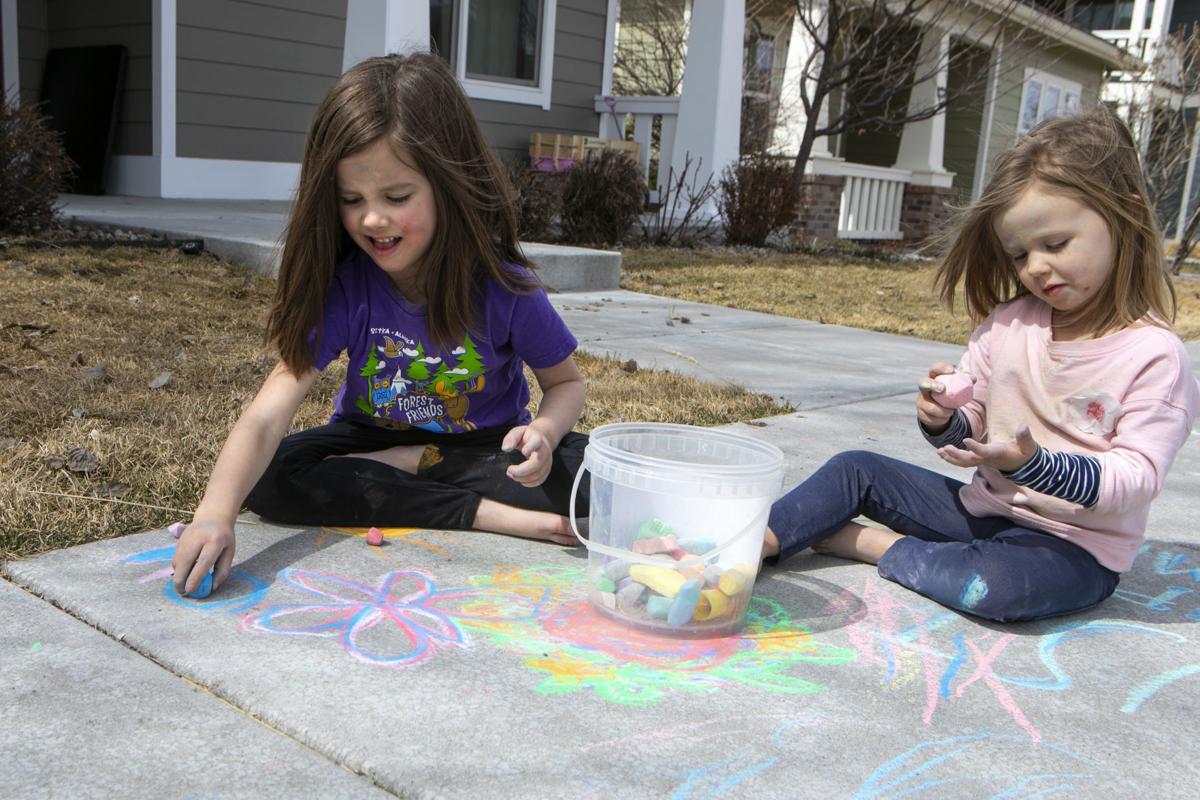 Taylor Cook, 5, and sister Addie, 2, make the best of the statewide stay-at-home order by marking up the sidewalk in front of their home with chalk Tuesday, April 7, 2020, in Bozeman. The girls’ mother, Jen, said they’ve been trying to stay busy by playing outdoors and taking care of Taylor’s preschool work online. Governor Steve Bullock has extended the stay-at-home order to April 24.

Taylor Cook, 5, and sister Addie, 2, make the best of the statewide stay-at-home order by marking up the sidewalk in front of their home with chalk Tuesday, April 7, 2020, in Bozeman. The girls’ mother, Jen, said they’ve been trying to stay busy by playing outdoors and taking care of Taylor’s preschool work online. Governor Steve Bullock has extended the stay-at-home order to April 24.

Gov. Steve Bullock has extended Montana’s stay-at-home order until April 24 to limit the spread of the coronavirus.

Bullock’s order, which he announced on Tuesday, also continues the closure of public schools, public gathering places and many businesses.

People can continue to leave their homes for necessities like groceries and medical care and to go outside as long as they remain 6 feet away from others. Businesses deemed essential — such as construction companies, gas stations and restaurants offering takeout and delivery and drive-through services — can remain open.

“While at this point we may not be able to pinpoint exactly how long the pandemic will last or when Montana will hit its peak, there are several things that we do know,” Bullock said. “We know that staying home will help to flatten the curve.”

As he announced the closures, Bullock urged Montanans to wear a cloth mask or other face-covering when they go out in public, following new recommendations from the U.S. Centers for Disease Control and Prevention.

On Tuesday, Bullock also extended prohibitions on evictions and foreclosures and on utility companies cutting off service.

Guidelines for travelers also remain. Those coming to Montana from another state or country are still required to self-quarantine for 14 days.

The National Guard has been dispatched to the state’s major airports — including Bozeman-Yellowstone International Airport — to check arriving passengers for symptoms of COVID-19. The National Guard had checked 1,201 passengers’ temperatures as of Tuesday, Bullock said. Six passengers had been referred to health care providers and none had tested positive for COVID-19.

“These steps may seem extreme. In a state like Montana, they may seem too cautious,” Bullock said. “ … Every action that we take now will help us overcome these challenges or, even better, make sure we never have to confront them. We don’t have to become like New York.”

As of Tuesday, Montana had 319 confirmed cases of the coronavirus, six people had died, 28 had been hospitalized and 58 had recovered. The state had conducted nearly 7,000 COVID-19 tests. Gallatin County continues to have the highest number of cases at 119. One COVID-19 patient in Gallatin County was in the hospital on Tuesday.

The virus has hit Toole County particularly hard. On March 25, the Marias Heritage Center, a long-term care facility in Shelby, announced its first case of COVID-19. Twenty cases — 17 in Toole County and three in neighboring counties — have since been tied to that case, Bullock said. Those affected have been in isolation or self-quarantine.

The Marias Heritage Center and the associated Marias Medical Center are being deep cleaned and state and local officials are working to address the virus.

“An outbreak in a rural community could easily overrun local health care facilities,” Bullock said. “… Distances between critical access hospitals in Montana are far. It’s already difficult for our fellow rural Montanans to access care and we ought to make sure that those challenges don’t become more cumbersome.”

Bullock began enacting closures a few weeks ago, starting with the shuttering of schools, followed by restrictions on public gathering spaces and culminating with a stay-at-home order, which went into effect March 28.

Bullock said Tuesday that he will continue to reexamine the closures and that he hasn’t yet considered when to lift them.

The Gallatin City-County Health Department has its own emergency rule closing public gathering spaces like gyms and restaurants while allowing for takeout and delivery. The rule went into effect March 16 and is set to end April 17 — before the statewide stay-at-home order ends. The county board of health will meet early next week to decide whether to extend the rule, said county spokesperson Whitney Bermes.

The statewide closures and stay-at-home order have exacted a significant economic toll. The state Department of Labor and Industry made 24,646 unemployment benefit payments totaling $7.9 million between March 29 and April 5.

Bullock said the long-term benefits of his policies will outweigh the short-term consequences.

“It is not a choice between a healthy population and a healthy economy — the two go hand in hand. Managing this public health crisis now will help prevent long-term consequences that could upend our economy for a longer duration and with a worse outcome,” he said.

Also on Tuesday, Bullock waived the requirement that local governments implement a two-mill levy in order to access money available through the new federal stimulus package, which is expected to bring $1.25 billion to Montana.

He also announced that first responders will receive a warning when they are responding to an emergency that may involve someone with COVID-19. If prior warning isn’t possible, Bullock has instructed state and local health officials to prioritize later notification of potential exposure to first responders.