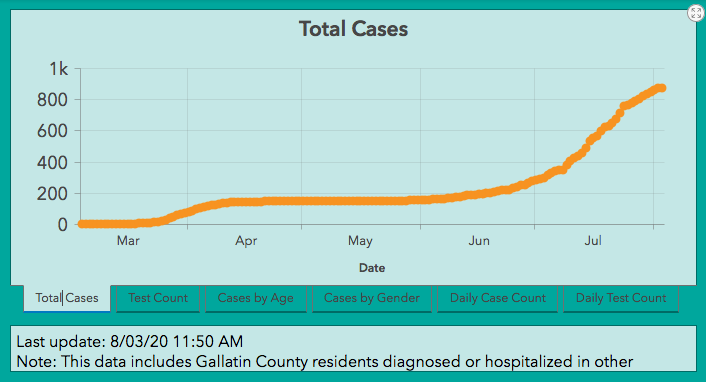 Despite working from the same data on Gallatin County’s coronavirus trends, school leaders in Bozeman and Belgrade have so far taken different approaches to reopening schools and deciding whether it’s safe to bring students back into classrooms full-time.

The Bozeman School Board will discuss this “blended” plan at a special meeting Thursday morning. The board will take public comment and could possibly even vote then, or it could hold off on a decision until next Monday night.

Meanwhile, in the county’s second largest school district, the Belgrade School Board changed its mind about its earlier decision to use the blended plan. Belgrade trustees voted 6-1 Monday to return students to regular in-school instruction five days a week, with the option that parents who wish to can sign up for 100% online instruction.

Connors said he’s recommending the blended plan for Bozeman, but the school board could pick a different model.

“As a superintendent,” Connors said, “I think it’s the safest way to continue moving forward.”

In the blended plan, half of students would come to school Mondays and Tuesday, and the other half would come Thursdays and Fridays. Classrooms would be half-full, with 10 to 15 students instead of 20 to 30. Students would have more room to remain at a distance. Students, teachers and parents would have to work at making remote learning successful the other three days a week.

On Facebook, working parents have posted concerns about having to find child care and the lack of supervision for kids with all-day internet access. Families without internet access say they’d need help.

Connors earlier this summer was leaning toward bringing students back to school five days a week, but changed his mind when virus cases “exploded” in July.

He said Tuesday the seven-day trend of positive virus tests reported by the Gallatin City-County Health Department is 11.59%, and 12.44% over 14 days. Nationally, he said, some states won’t open schools unless the trend is 5% or lower.

Starting school with the blended option would have the best chance of working, he said. If the schools open 100% and then the virus surges, he said, they’d have to switch back suddenly to 100% closed schools and remote learning.

Belgrade Superintendent Godfrey Saunders said his board trustees changed their mind about the blended plan for several reasons. Staffing would have been difficult, and many families have both parents working.

“We have to take into consideration the needs of our community as a whole,” Saunders said. While child care isn’t the school district’s job, he said, about a quarter of younger students, or 600 kids, would have been affected if they were out of school three days a week.

When schools closed suddenly last March because of the virus, Saunders said, “a few underage kids were home alone.” And many parents found it hard trying to be their children’s teachers.

Online teaching works best if it’s live, but often when teachers tape their lectures for students to watch later, it’s not as good because kids can’t get immediate answers to their questions, he said.

Another consideration is that if athletic teams keep practicing, students from the entire high school mingle together, which could defeat the “blended” model’s attempt to separate large groups of students to avoid spreading the virus.

“Our staff would be exposed to the entire student population during the week, no matter what,” Saunders said. “It came down to the best way to meet our needs is with in-person (schooling).”

No matter what, there will be COVID-19 virus cases in the schools, he said. “I feel confident with their (health department’s) assistance, we’ll be able to address those.”

So far reactions from teachers and parents have come from all sides, both supporting and opposed to the plan, Saunders said. “Whatever you decide you’re going to be damned if you do, damned if you don’t.”

It would be unfair to compare the two school districts, since they’re different demographically, Saunders said.

“This is new to all of us,” he said. “Every decision we make could very well change tomorrow. It’s the nature of the virus.”

The Bozeman School Board had originally planned to hold its annual retreat Thursday to discuss long-range issues. Now the back-to-school re-entry plan is the first item on the 9 a.m. agenda. It’s listed as an action item, meaning trustees could vote then. The public can observe the meeting and comment by clicking on the Zoom meeting link on the school district’s agenda website.