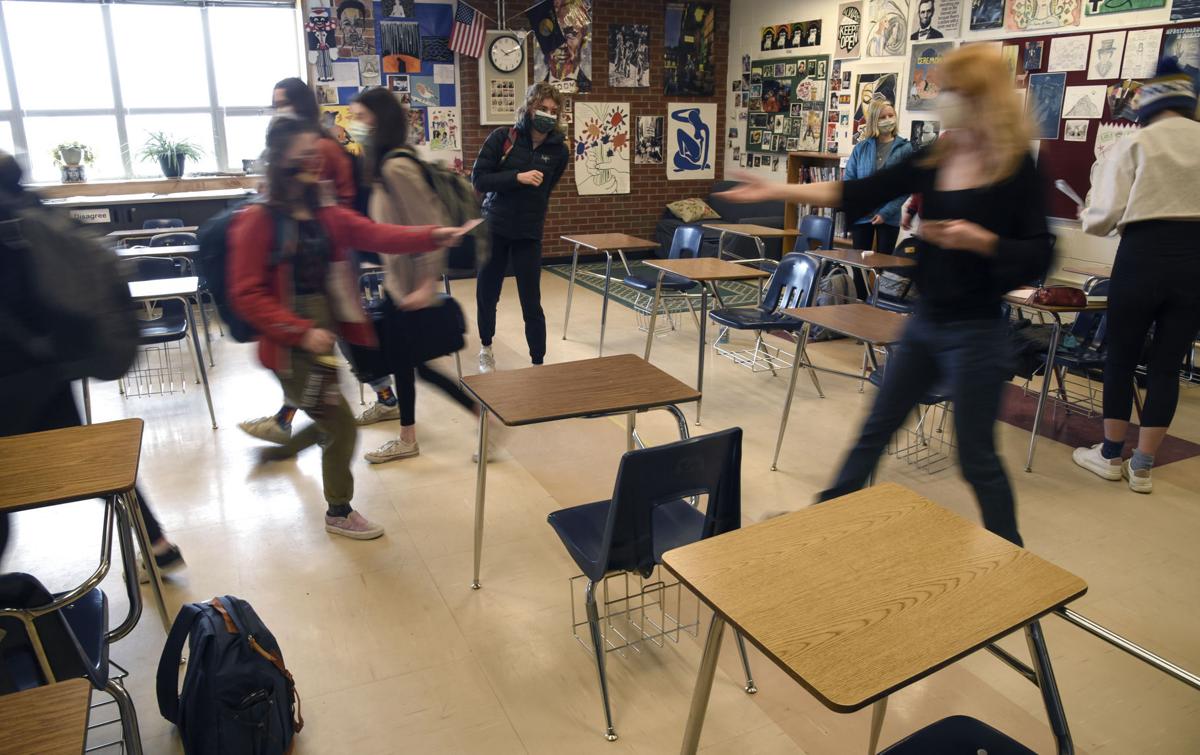 Seniors pack up their belongings at the end of Heidi Robison's AP English class on Thursday, Feb. 26, 2021, at Bozeman High. 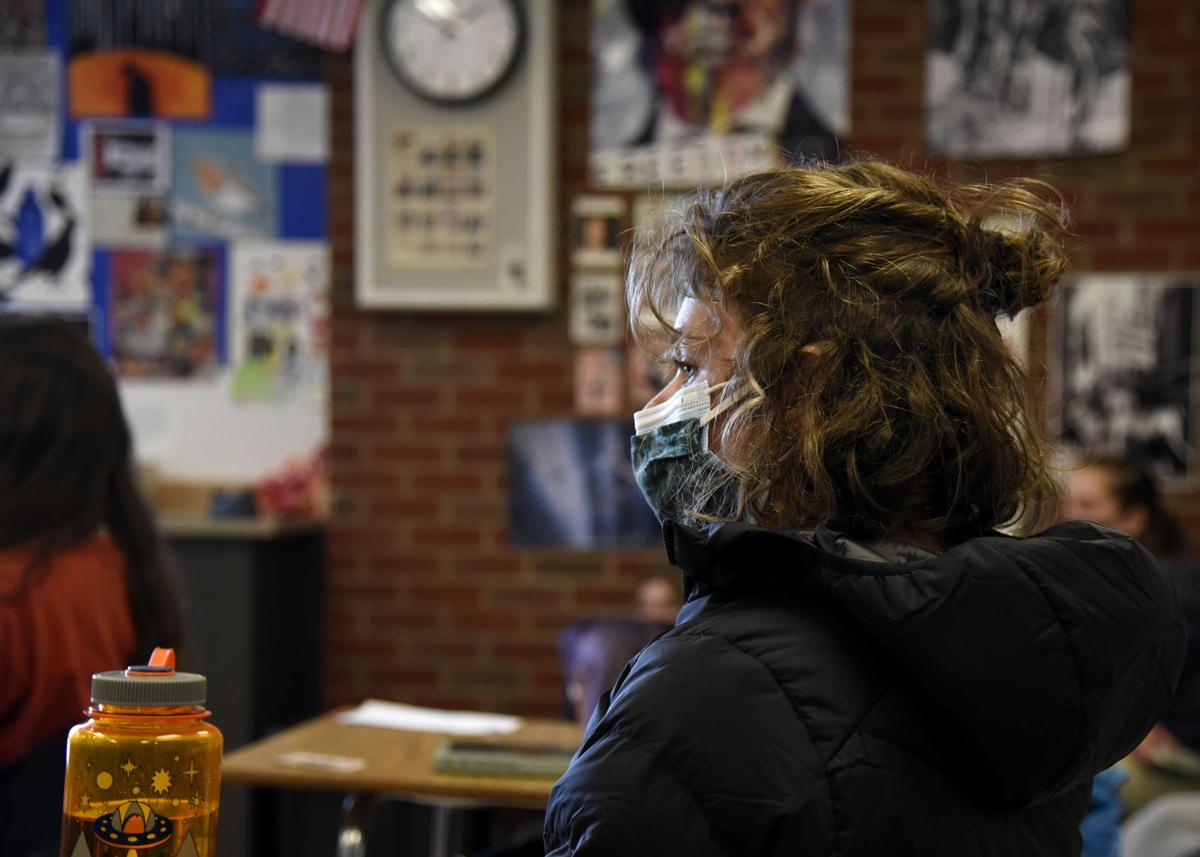 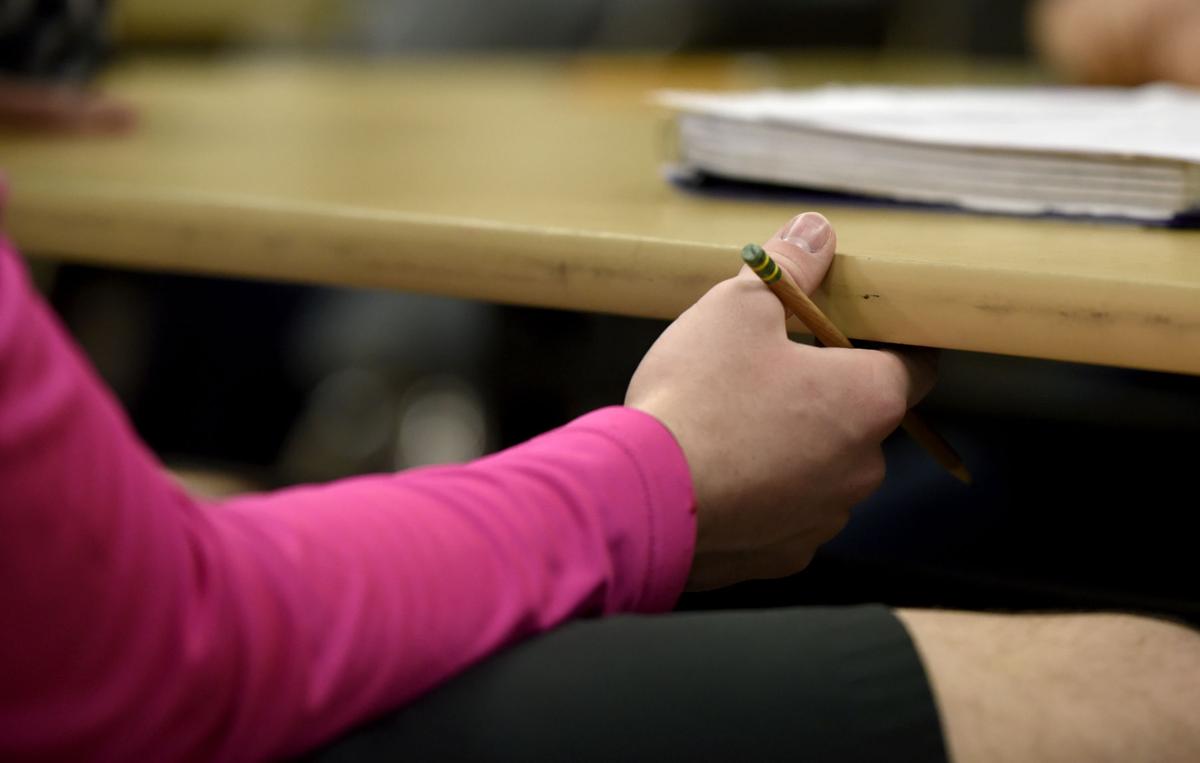 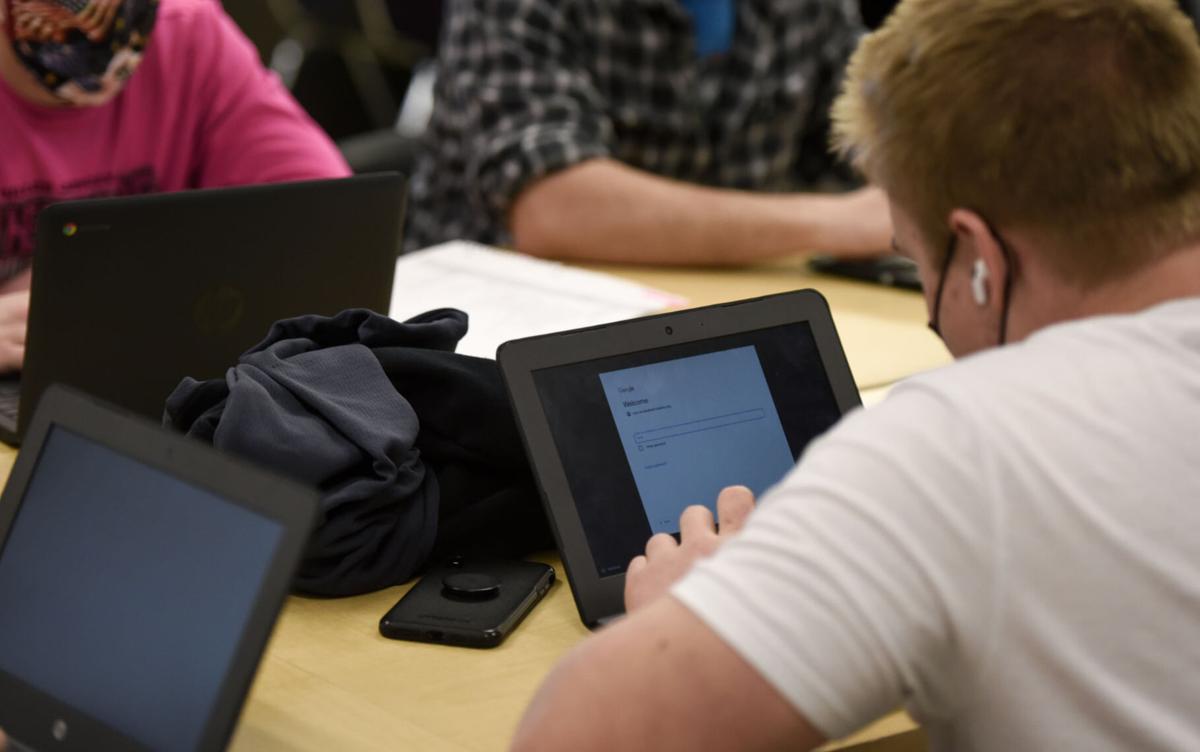 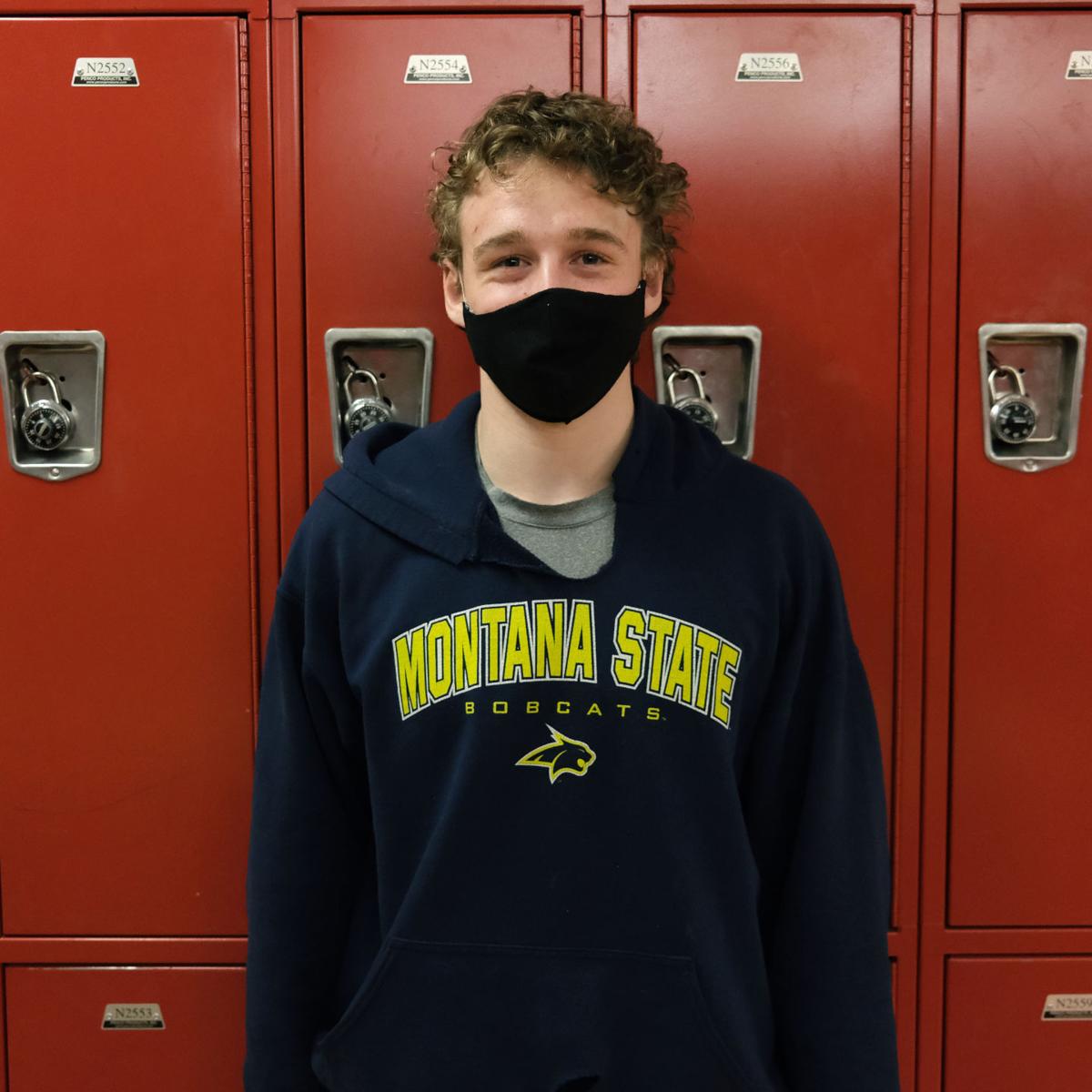 Caleb Hedges, 17, is a senior at Bozeman High.

Projected into the dark night of a farm somewhere in Gallatin County, Zac Efron as Ted Bundy loomed large. Below him, a group of Bozeman High students perched on top of their cars scattered throughout the field.

Faced with a global pandemic, social distancing mandates and shuttered movie theaters and other teen haunts, the group of friends got creative. They created their own drive-in theater.

For Annie Battle, a senior at Bozeman High, it’s one of her favorite memories from the early days of the pandemic lockdown.

“It’s not something we would have done regularly but that was an awesome memory,” Battle said.

It’s an example of unconventional memory in an entirely unconventional senior year marked by partial remote learning, health concerns for families, friends and teachers, and increased responsibility and stress for many students.

Perhaps one of the most disruptive changes is the increased responsibility many seniors have faced. Sullivan and Sellegren said some of their students have picked up jobs to help their families financially, or have taken on caretaking duties for younger siblings

Sullivan said for many seniors, the fall added the additional strain of applying for colleges and now scholarship applications.

“There’s other expectations they have to live up to,” she said. “It’s much more difficult this year to carry those responsibilities than other years.”

Since the pandemic first reached Montana last year, online learning has been pervasive. With it has come a learning curve for students, as most navigate managing their own learning in a new way and the drain of limited social interaction.

For the district’s two high schools, the school year has been a mix of a blended learning model of two days in-person and three days remote, and four days of in-person which launched on Jan. 27.

Throughout the school year, Sullivan and Sellegren said students have struggled to get social connection with their peers. Some students in the blended model even reported feeling lonely if their friends were in a different learning track from them, according to the counselors.

“It’s human connection and finding motivation within themselves, those are the things I’ve heard are the hardest for kids,” Sellegren said.

For Battle and her fellow soccer teammates, one way they stayed connected during the pandemic was through their love of true crime and all-things serial killer related. To foster that, Battle and her brother designed a murder mystery her teammates could solve via Facetime.

“It’s been a different year but not the worst year ever,” she said. “It’s hard to keep up with the social interaction but its fun to figure out new fun ways to get together.”

The students who spoke with the Chronicle all reported this school year has looked radically different than they expected their senior year to be, but some added it has not necessarily been a bad year.

For some, increased online learning gave them new freedom and flexibility with their schooling and extracurricular activities.

Jocie Funderburk has been on the high school’s remote-only track since October. She said it’s given her the freedom to design her own schedule and move through classwork at her own pace.

“I’m a self-motivated person and don’t necessarily need a teacher telling me what to do, because of that I almost like Track C better than normal years because of the freedom it allows,” she said.

Senior Caleb Hedges started a work experience class last semester and said he’s enjoyed the opportunity to work outside of school and get hands-on training.

“I think I kind of preferred the blended model personally because I was able to work,” he said. “…It was super awesome, it was nice to be able to be outside, and I definitely learned a lot there and will hopefully use it later in life.”

For other seniors like Annika Gao, online school has been harder to navigate, especially when balancing the need for social interaction.

“I didn’t realize how difficult it would be to communicate with other classmates and things like that,” she said. “In general, it’s been a test of being diligent and disciplined.”

Ellie Hull said learning to manage her time with remote learning has been one of the biggest challenges for her, but it’s also been good preparation for college next year.

“The blended model and now with four days a week, we still have that extra day for managing time,” she said. “It’s taught really good self reliant skills.”

For Trevor Foreman, who underwent a series of surgeries in the last year, online learning helped him keep up with the schoolwork he was missing.

“It made things easier because I was really stressed wondering if I was going to be able to get things done,” he said. “The blended model made it easier to access work.”

Sullivan and Sellegren said how a student adapts to online learning and the possible social isolation is highly individual.

Due to public health mandates and social distancing requirements, many typical senior moments have also been lost or altered during the pandemic.

“A lot of seniors missed out on monumental senior social events,” Sullivan said. “There was limited capacity for football games, no homecoming dance and we’re not sure if prom will happen.”

For Bozeman High seniors, it has had a mixed impact, with some reporting they feel like they missed out and others saying they find more connection through smaller hangouts with friends than larger school events.

“Homecoming was something I was kind of looking forward to,” Hedges said. “… My friends and I did our own thing though.”

Hedges said he was hopeful that prom would happen this spring but if not, his friends would most likely plan something else to do together again.

For Hull, the loss of homecoming and other school events hasn’t been a big impact on her senior experience.

“Those types of events have never been anything I’ve done,” she said. “I tend to like to do hangouts with people in smaller events.”

For some seniors, it has meant the loss of large trips they looked forward to their whole high school career. Gao, who is in orchestra, said their trip to Europe was canceled. She said while people felt devastated, she was still glad they decided to put everyone’s health first.

“Going through high school, those things didn’t really interest me and I’d say I’d do it my senior year,” Funderburk said. “But now, it’s like nevermind.”

Sullivan and Sellegren said the seniors they work with have shown remarkable understanding and resiliency during this time, as a lot about their last year in high school has changed.

“They’ve had to make sacrifices for the wellbeing of adults,” Sullivan said. “Our health and safety is the reason why a lot of their year has been taken away. The sacrifices they’re willing to make for their bigger community is worth recognition.”

For some students, the struggles unleashed by the pandemic have altered their ability to even finish school how they envisioned it.

“I’ve had more seniors drop out than I’ve had in my whole 10 years,” Sellegren said. “There’s been some really negative effects from the lack of a place to be at a physical school.”

Sullivan said the students who decide to drop out are still supported by the school and often go on to complete their equivalency exam.

She added that each person’s reasons for dropping out are highly individual. One student was living with their single mother who recently died and now the student has to fully support themselves with work. Another student is a caretaker for younger siblings and couldn’t dedicate six hours a day to school.

“There are pretty extreme hardships that are really preventing a student from coming in and accessing an education,” Sullivan said.

Sullivan and Sellegren said across the board they’ve seen mental health concerns increase, and if students are struggling academically there’s often something bigger going on.

Many students like Battle, Hull, Funderburk and Gao also said they made the decision to limit how many people they were hanging out with to cut down on possible exposure to the virus.

“I definitely think because of the pandemic my friend group has gotten smaller,” Hull said. “Those relationships have gotten a lot better. I’m a lot closer with those people.”

Foreman, the senior who had multiple surgeries, said the pandemic added to his since of isolation during his recovery.

“I couldn’t have a lot of visitors,” he said. “It definitely leaves a feeling of loneliness but it makes the connection with the intimate friends more intimate and authentic.”

While Funderburk said she is an introverted person, she has still struggled to connect with friends.

“The social interaction is probably the biggest thing I’m missing out on,” she said.

The seniors’ plans for life after high school are just as varied as their experiences have been within the pandemic.

Hedges said a Bozeman army recruiter approached him on Instagram early last year. After discussing it with the recruiter and his mom, he decided to enlist in the Marines in June 2020.

“I just felt like I wasn’t really ready for college,” he said. “I’m not a big fan of school.”

A week after graduation, he’ll likely attend his basic training.

Hull, who is a cross country and track athlete, said applying for colleges was a fairly straightforward process for her. While she wasn’t able to do in-person visits for all of the colleges she applied to, she did manage to visit a couple.

She said how the schools have handled the COVID-19 pandemic in the last year did factor into her decision-making.

Gao said she also applied to colleges and is waiting to hear additional financial aid information before making a decision. She plans to go into molecular or cellular biology. She said it was a passion of hers long before the pandemic.

“Graduation is something we’re all waiting for,” she said. “I’m kind of just playing it out, just so prepared and expecting so man uncertain things.”

Foreman plans to spend three months in Hawaii training for a youth mission before traveling abroad for another three months.

“There’s all these social, cultural pressures to jump into college or jump into a gap year,” he said. “… Instead of jumping into college right away, I’d rather figure it out and not jump into school right away.”

Funderburk said the remote-only track has given her more freedom and time to virtually explore colleges and plan for next year. She hopes to major in outdoor recreation or tourism.

“I’d be very happy if that was something I could do with my life, to make the outdoors a more accepting and accessible place,” she said.

Battle, who applied for schools on the east coast, said she’s looking forward to the new experiences that await her.

“I’m really excited for summer, for graduation. It’s a big land mark,” she said. “I’m excited to go to college and excited to experience new things and meet new people. And I’m excited to try Dunkin Donuts for the first time.”

It hasn’t been a typical year for anyone, least of all the students who have had to adjust their expectations for not only their senior year but for what life after high school might hold for them.

Yet, there’s still a sense of excitement for the future, still the antsy anticipation of one last sun-drenched summer at home. After more than a year of living in a world shrunk-small, there’s the longing for a world that extends outside Bozeman High.