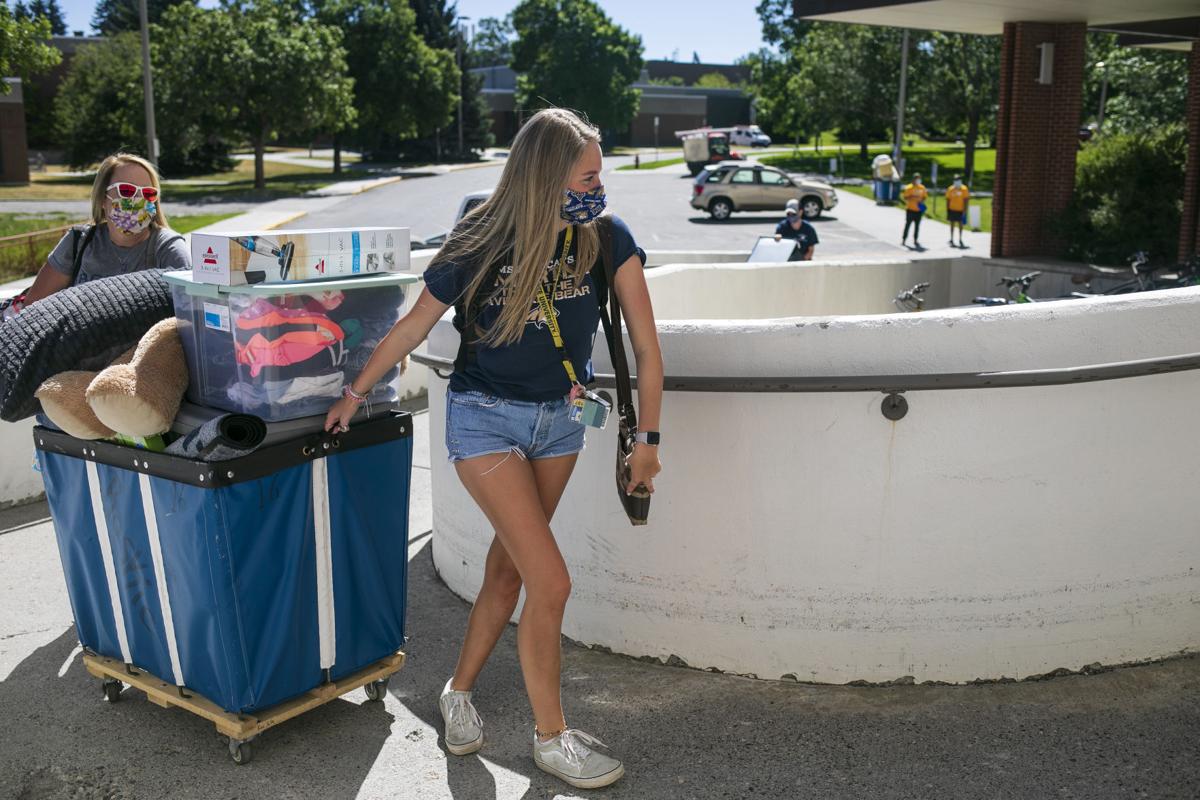 Kylie Anderson, an incoming freshman from Great Falls, pulls a cart of her belongings up to North Hedges dorm Monday at MSU. Students and parents moving into the dorms Monday were asked to wear masks and follow directions for appropriate social distancing. Residents have been given time slots over the course of the week to stagger the move-in process. 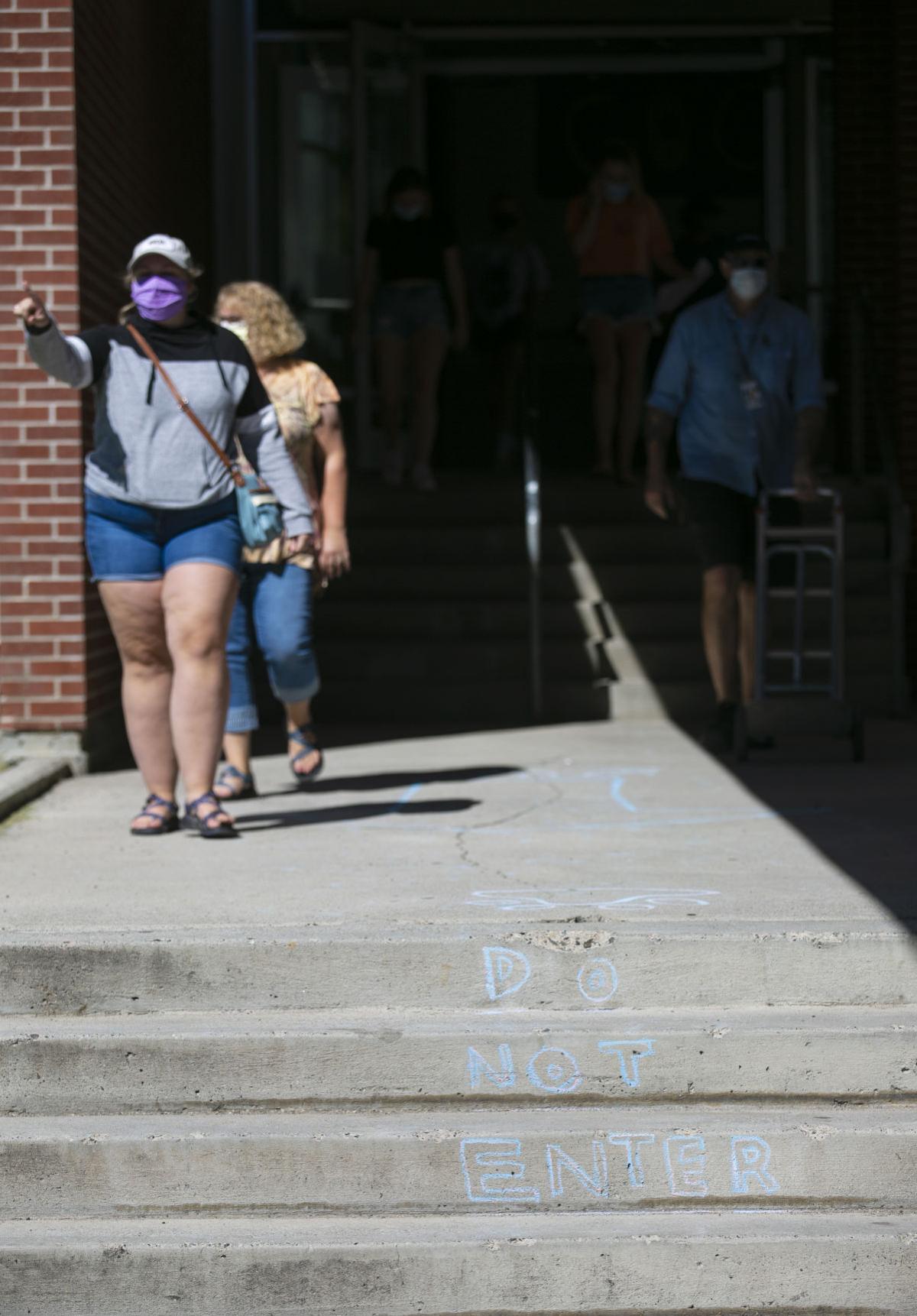 A one-way flow of traffic is suggested by chalk signs in front of North Hedges Hall Monday, August 10, 2020. 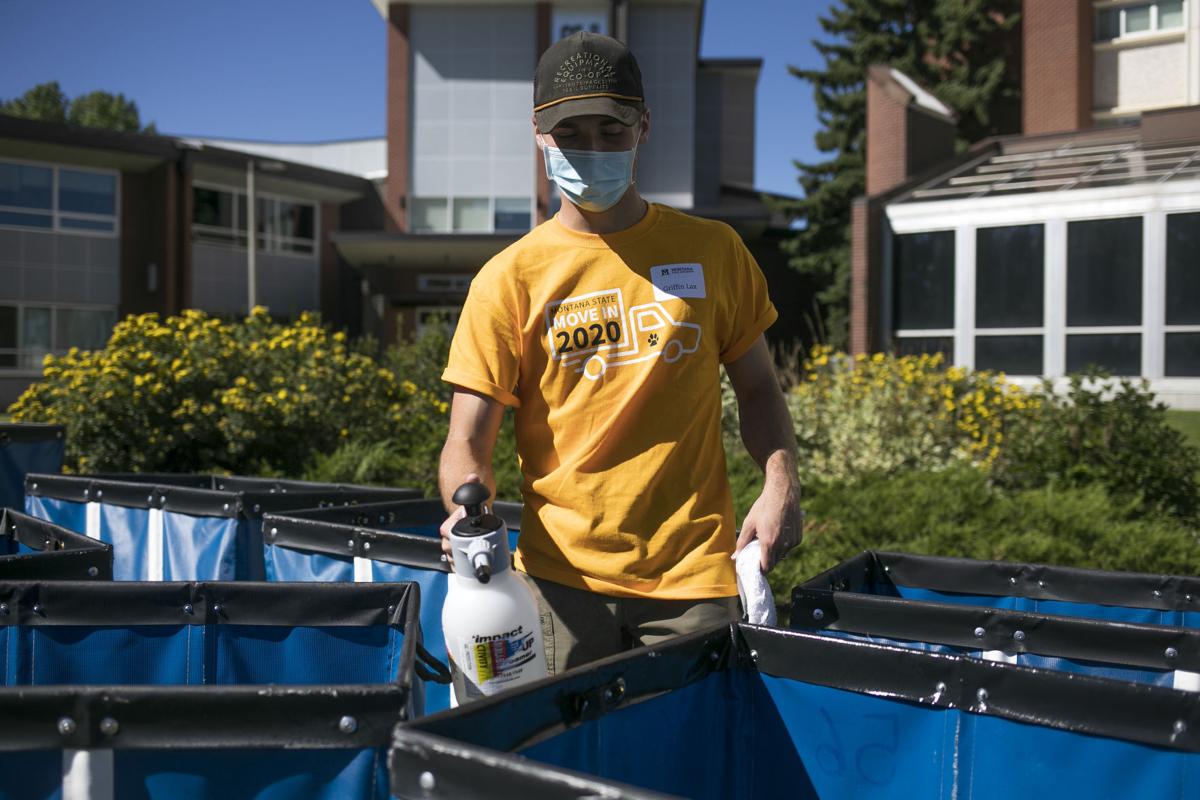 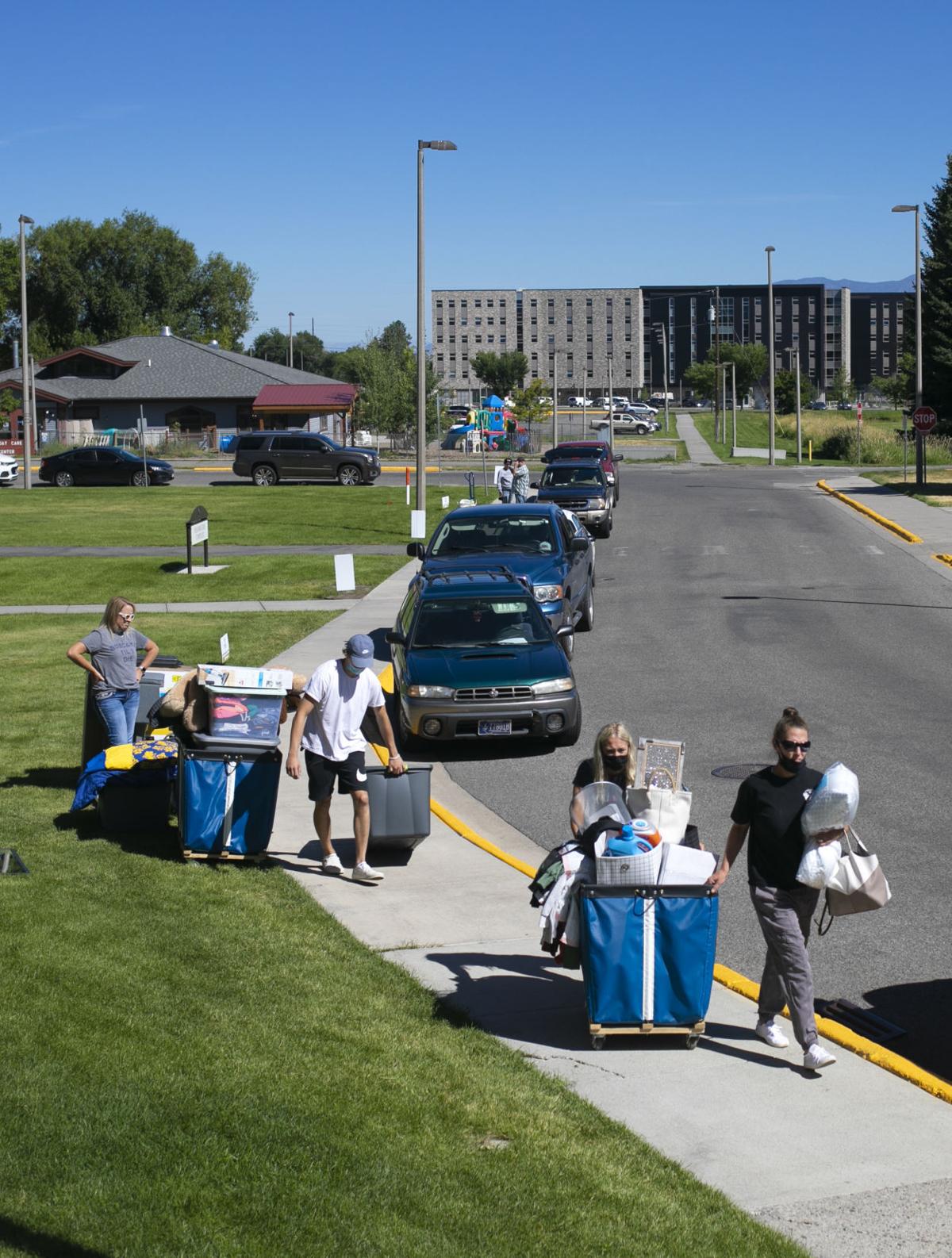 Students begin to return to Montana State University to move into their dorm rooms Monday, August 10, 2020.

Kylie Anderson, an incoming freshman from Great Falls, pulls a cart of her belongings up to North Hedges dorm Monday at MSU. Students and parents moving into the dorms Monday were asked to wear masks and follow directions for appropriate social distancing. Residents have been given time slots over the course of the week to stagger the move-in process.

A one-way flow of traffic is suggested by chalk signs in front of North Hedges Hall Monday, August 10, 2020.

Students begin to return to Montana State University to move into their dorm rooms Monday, August 10, 2020.

Instead of the typical buzz brimming throughout campus, students’ move-in appointments were scheduled in two-hour windows. Rather than on-campus housing filling up in a day, it will happen throughout this week. Only two additional people per student are allowed to assist inside each dorm at a time.

The structure of students moving in is different — like many other things ahead of a school year that will be unlike any other.

Before fall semester classes begin next week, protocols to stem the spread of coronavirus are already in place. Masks are required in buildings and when 6 feet of physical distance can’t be maintained. Regular welcoming events like Catapalooza are being held virtually and others like Rockin’ the M are being modified to accommodate physical distancing.

“I’m definitely super excited,” freshman Kylie Anderson said. “But I’m nervous to see what it’s going to be like. ... You’re going to have to have different precautions. It will definitely be a different experience for everybody. But I still think we’ll all make the best out of it.”

MSU is expecting roughly 3,000 students to move in to dorms this week, spokesperson Michael Becker said, although that could fluctuate as students and families hold out on making final decisions. The school can house up to about 5,000 students on campus, he added, and typically a quarter of the student body lives in campus housing.

Despite uncertainty looming for the rest of the semester, move-in week beginning Monday was one of the first steps toward as normal of a semester as possible, with MSU remaining committed to in-person classes.

Volunteers helping students move in have also seen changes. They’re no longer handling others’ belongings but are available to greet students at the curb, answer questions and clean off carts in between uses.

“If everybody is super cautious with what they do, we can hopefully kill this off,” Anderson said, “and get used to what we’re doing and make it better, not make it worse.”

Since move-in is staggered throughout the week instead of squeezed into one day, volunteers had time to mingle amongst themselves. Arriving students and their parents trickled in and out of North Hedges, Hyalite Hall and other dorms on campus without the bustling rush that would normally accompany move-in day.

Anderson said she’s looking forward to new experiences at college, even if they’re not quite like she would’ve previously envisioned. She plans on bringing cleaning supplies to classes so she can wipe off desks before and after she uses them. On Monday, she wore a blue and gold Bobcat mask.

She pointed out how the semester could be tricky when students from other states arrive. No matter what she chose to do this fall, though, issues surrounding the virus would always be prevalent whether she was in Bozeman or taking a gap year in her hometown of Great Falls.

“I really never had any hesitation to come,” Anderson said. “I was never really nervous to come. You can’t necessarily get completely away from it. It will always be there.”

As Anderson and others moved into North Hedges on Monday, music played from a speaker. Students walked up to the check-in station to find out information. They filled freshly cleaned carts with dorm room essentials: mini refrigerators, pillows, nightstands and laundry detergent. Some brought equipment for extracurriculars, like a snowboard or musical instruments.

Sabrina Charney, a freshman from Billings, said even though students won’t socialize in the same ways as the past, she trusts MSU’s policies and thinks people could still make new friends regardless. She complimented the school for how updates were communicated with students quickly so they could plan accordingly.

Her biggest hesitation about attending this semester stemmed from high-risk family members who have asthma. Charney doesn’t want to be a COVID-19 carrier and potentially infect them. But she said they have a plan to avoid issues and as long as she’s separate from them in Bozeman, it’s not as big of a concern.

“We should all be open to change,” Charney said. “Just part of the experience I guess. It should be great.”

Sophomore Kyle Miller is excited for the school year. Nervousness hasn’t set in yet. He said it’s “going to be fun, and interesting.”

Miller, from Great Falls, didn’t have much trepidation about moving in. The friends he’s been in touch with expressed similar feelings, though he was realistic about not knowing what to expect.

“I feel like it’ll be good, but at the same time, I don’t know,” Miller said. “Just because with a bunch of people here, anything could happen.”