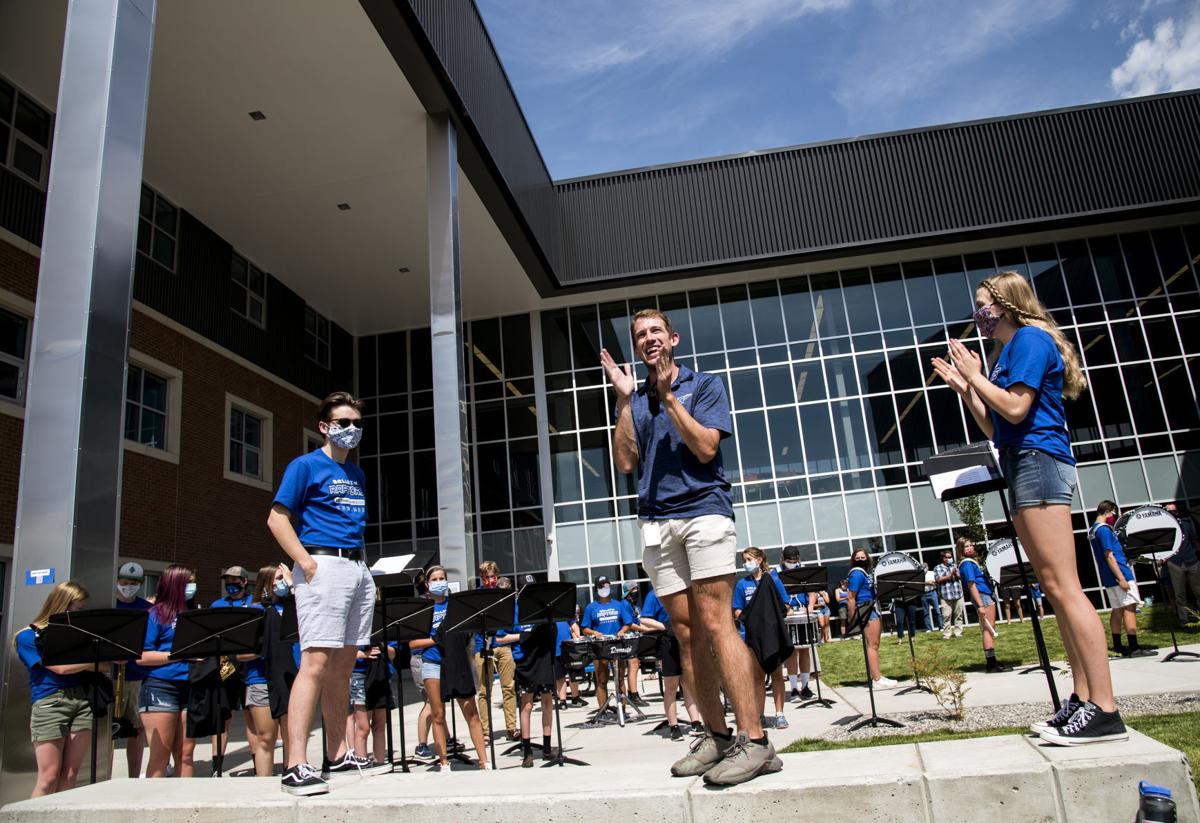 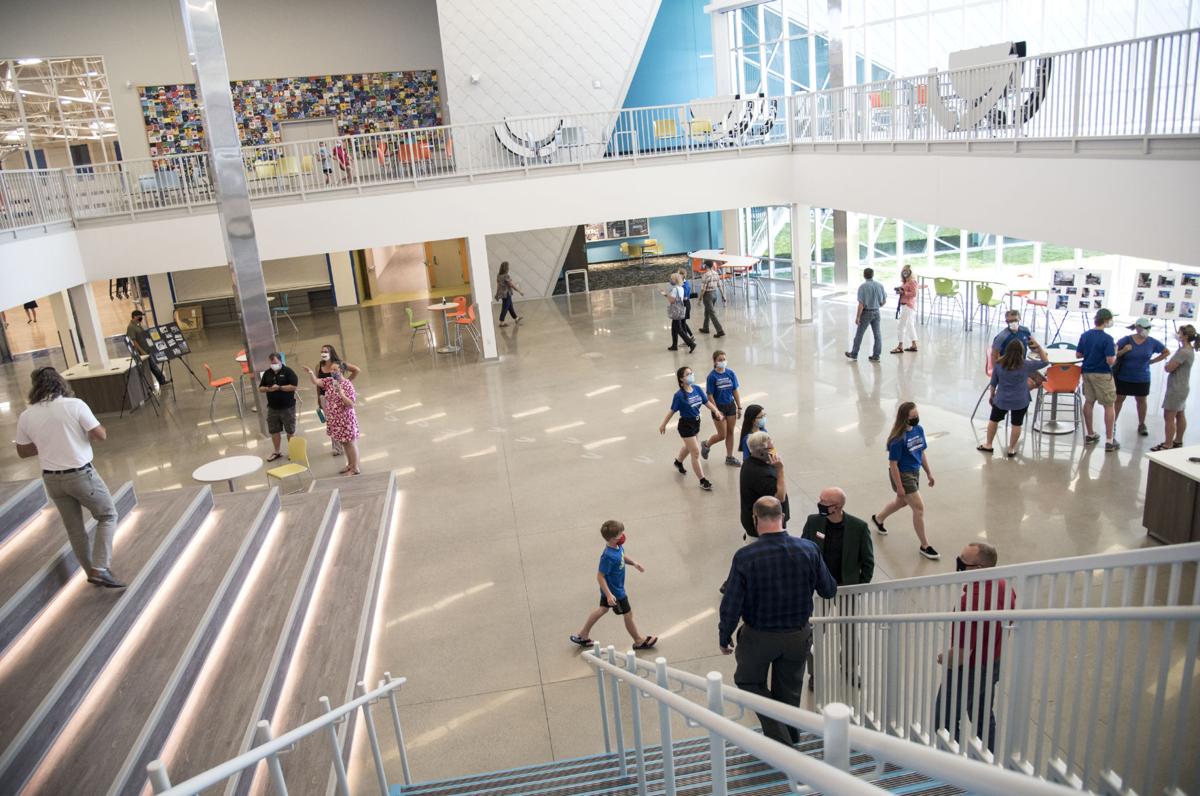 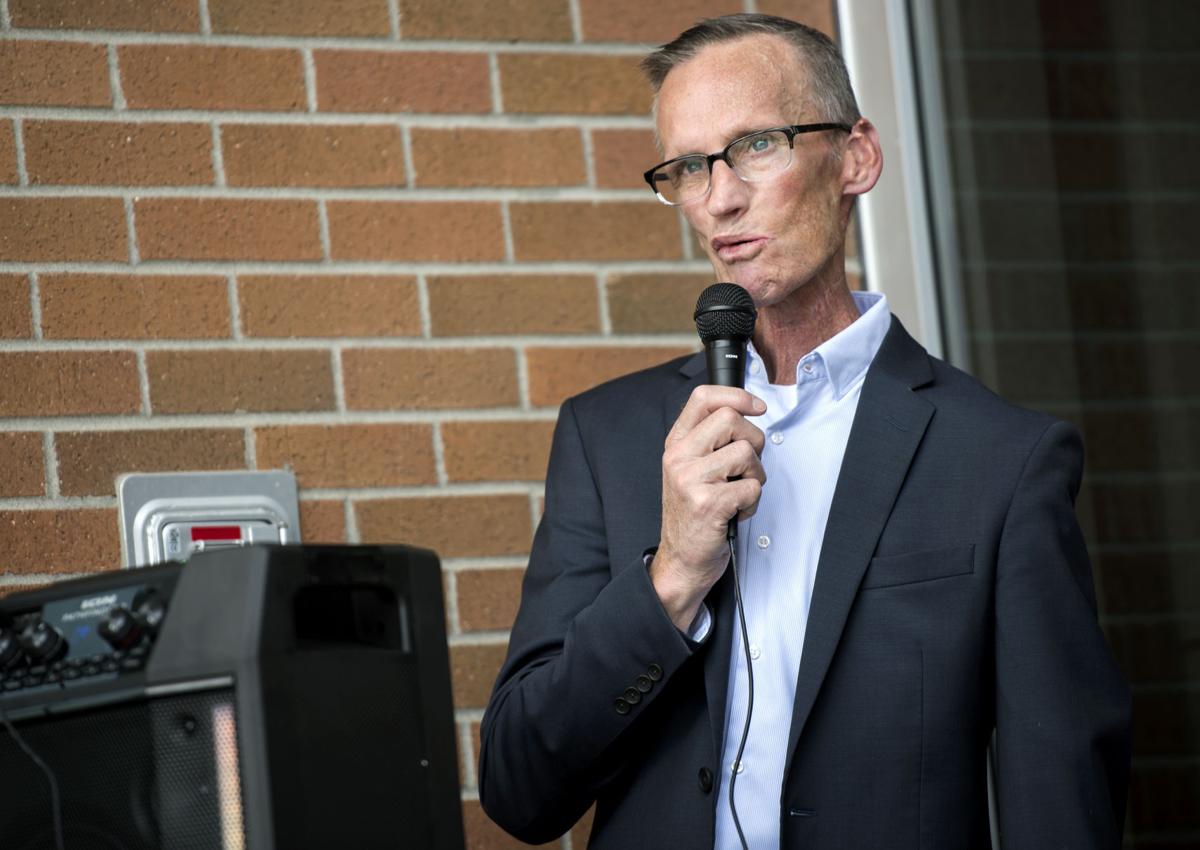 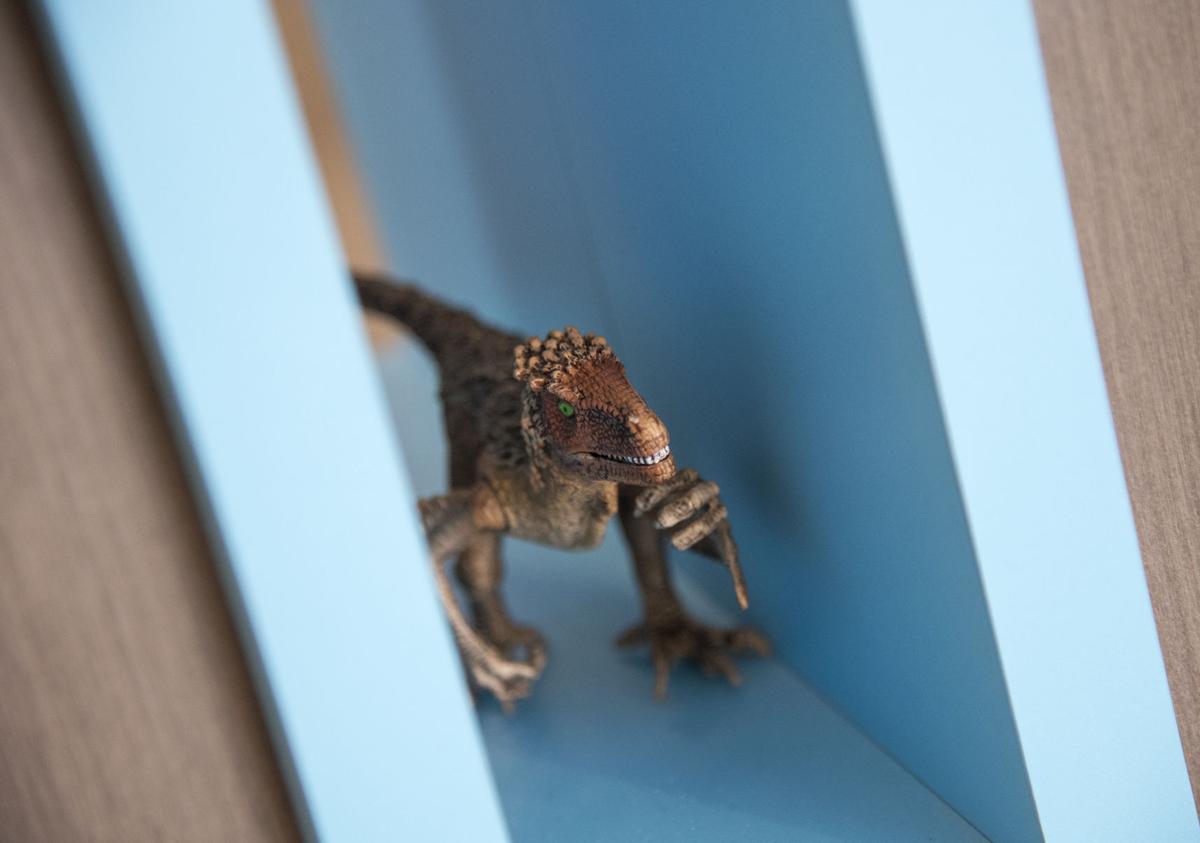 A small toy raptor, Gallatin High's mascot, is hidden next to the main stairs in the new high school on Monday afternoon, Aug. 17, 2020. 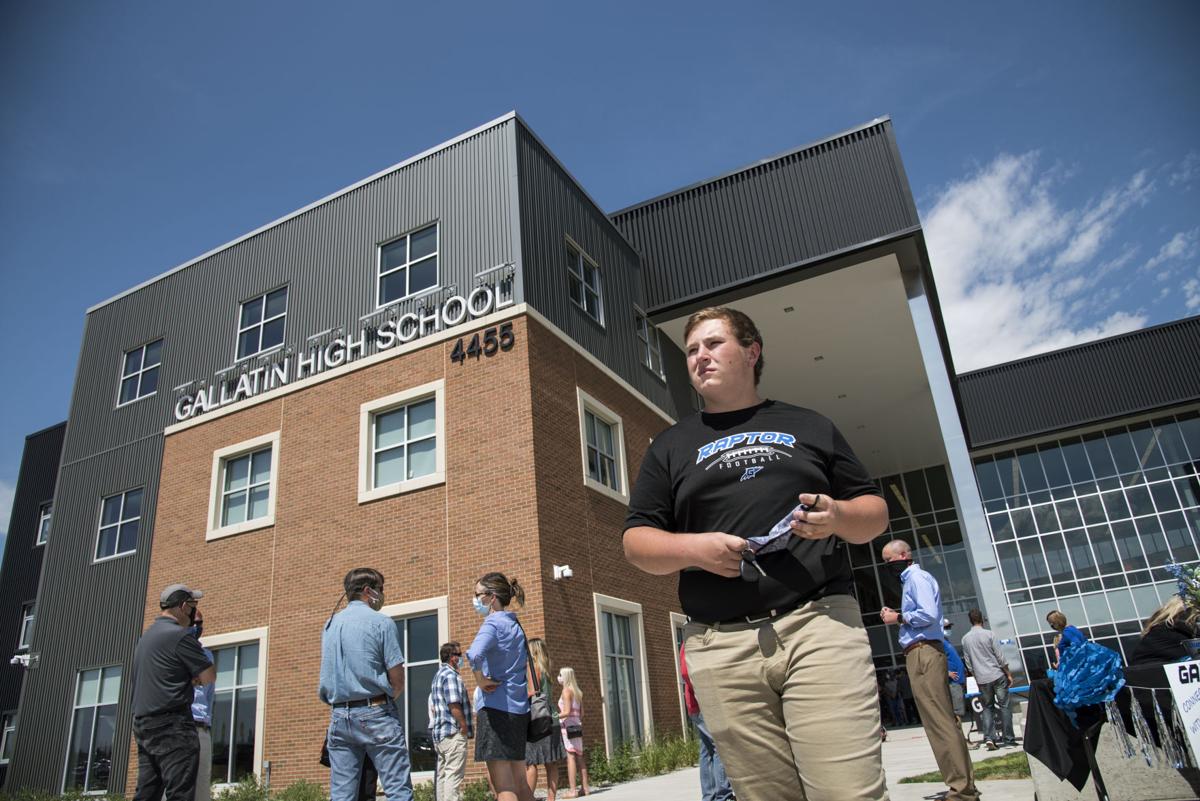 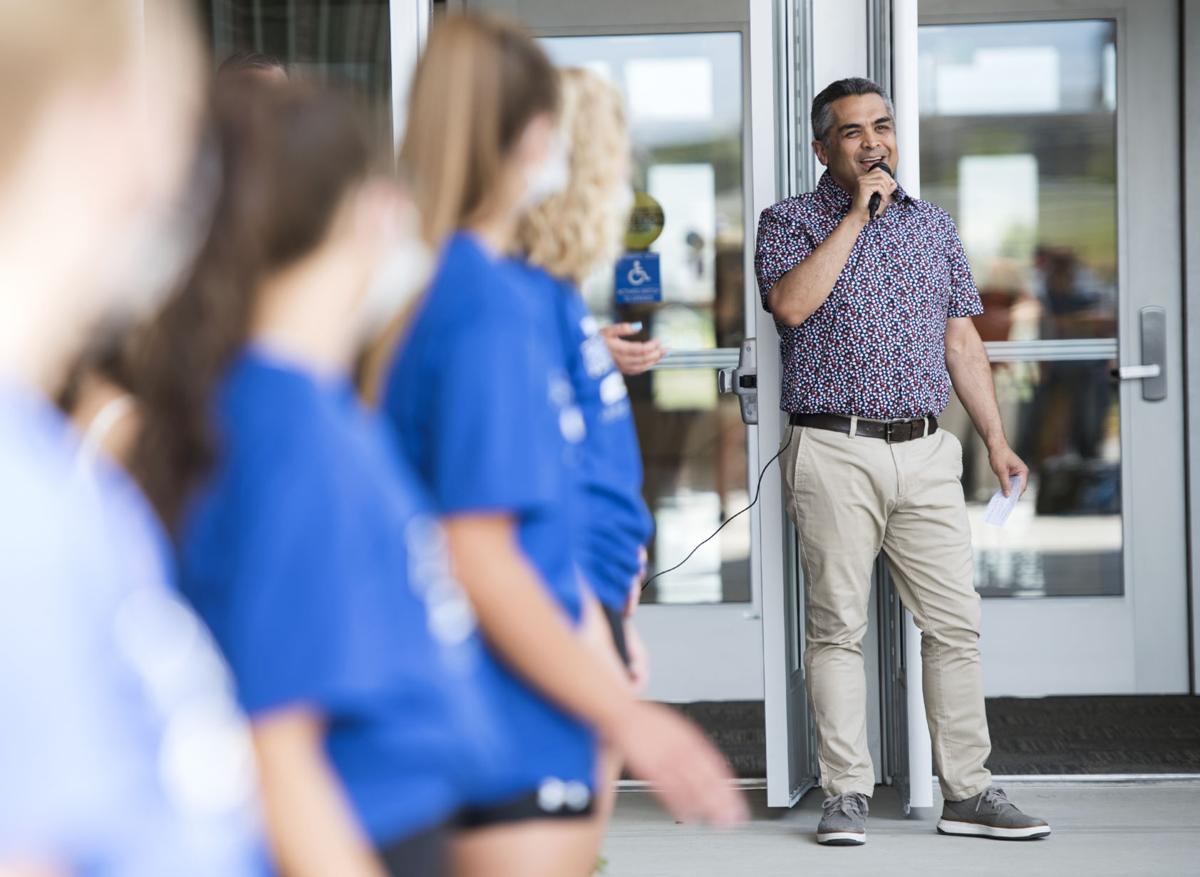 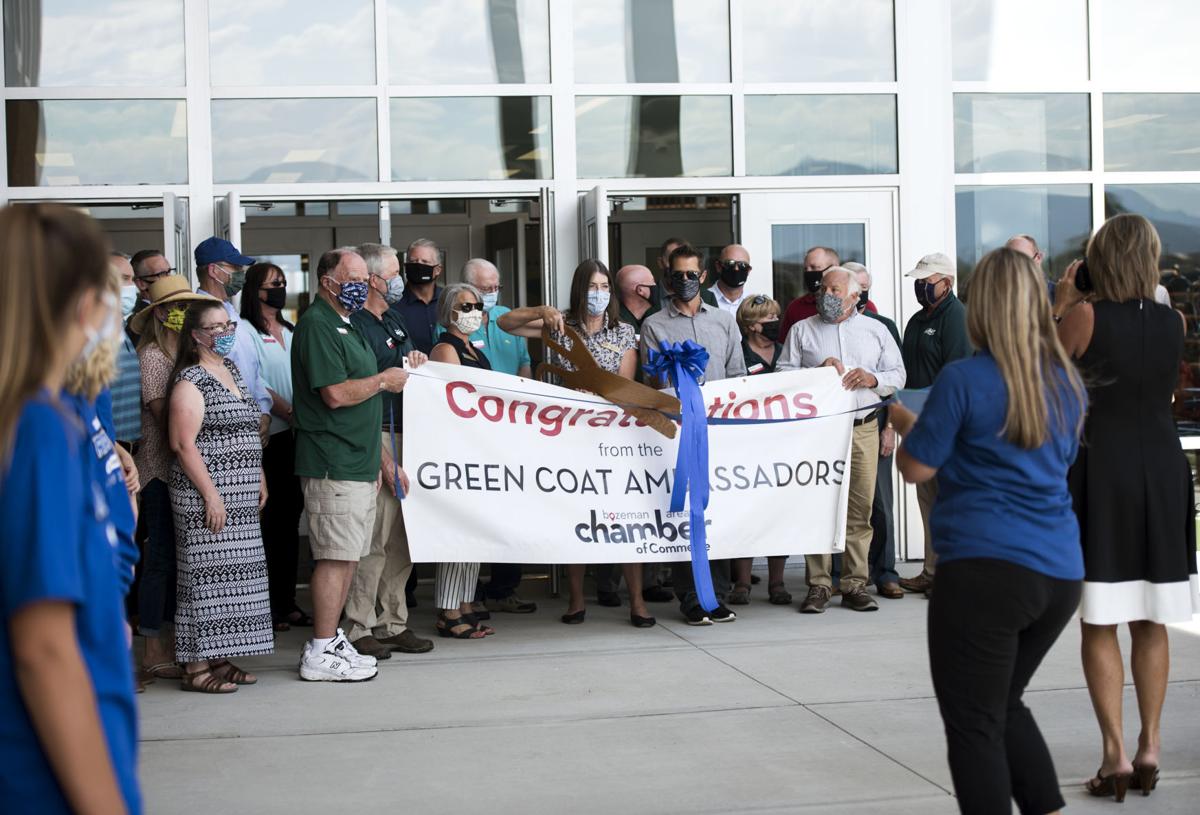 Sandy Wilson, chair of the Bozeman Public Schools Board of Trustees, cuts the ribbon at a dedication ceremony for Bozeman's newest high school, Gallatin High, on Monday afternoon, Aug. 17, 2020. 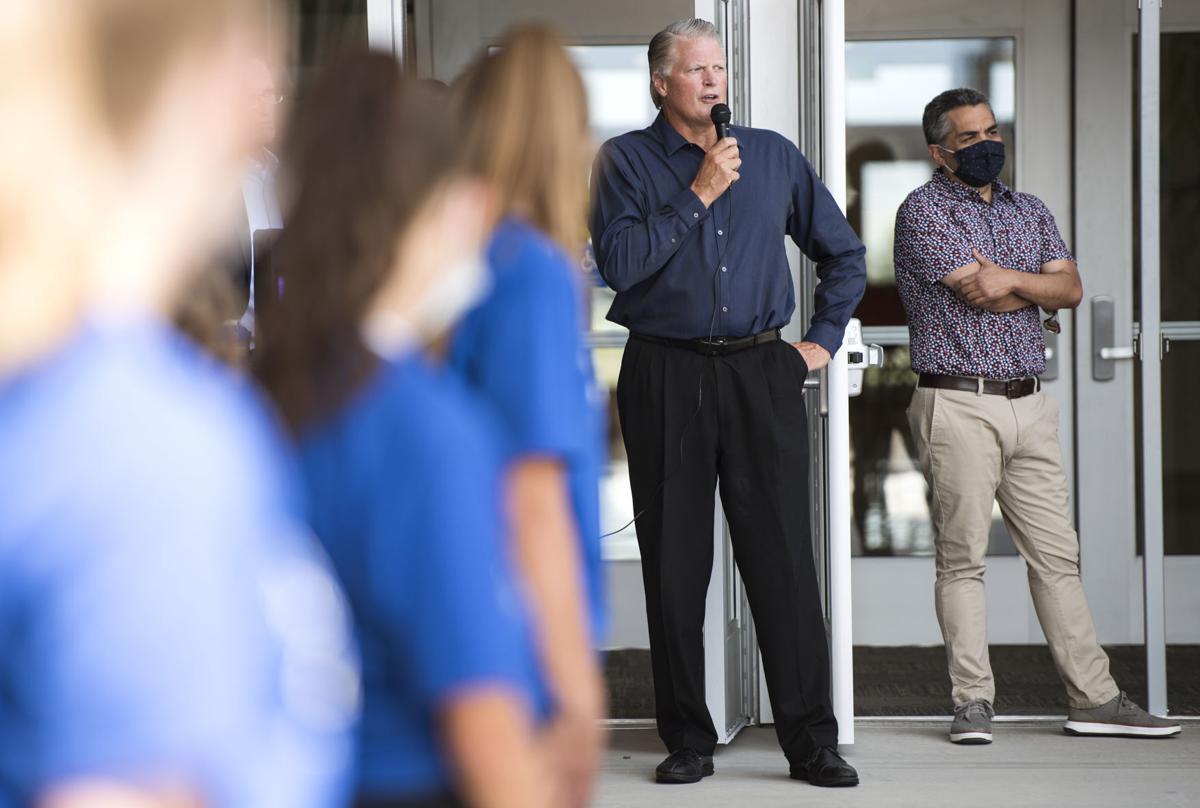 Daryl Schliem, with the Chamber of Commerce, speaks at a dedication ceremony for Bozeman's newest high school, Gallatin High, on Monday afternoon, Aug. 17, 2020. 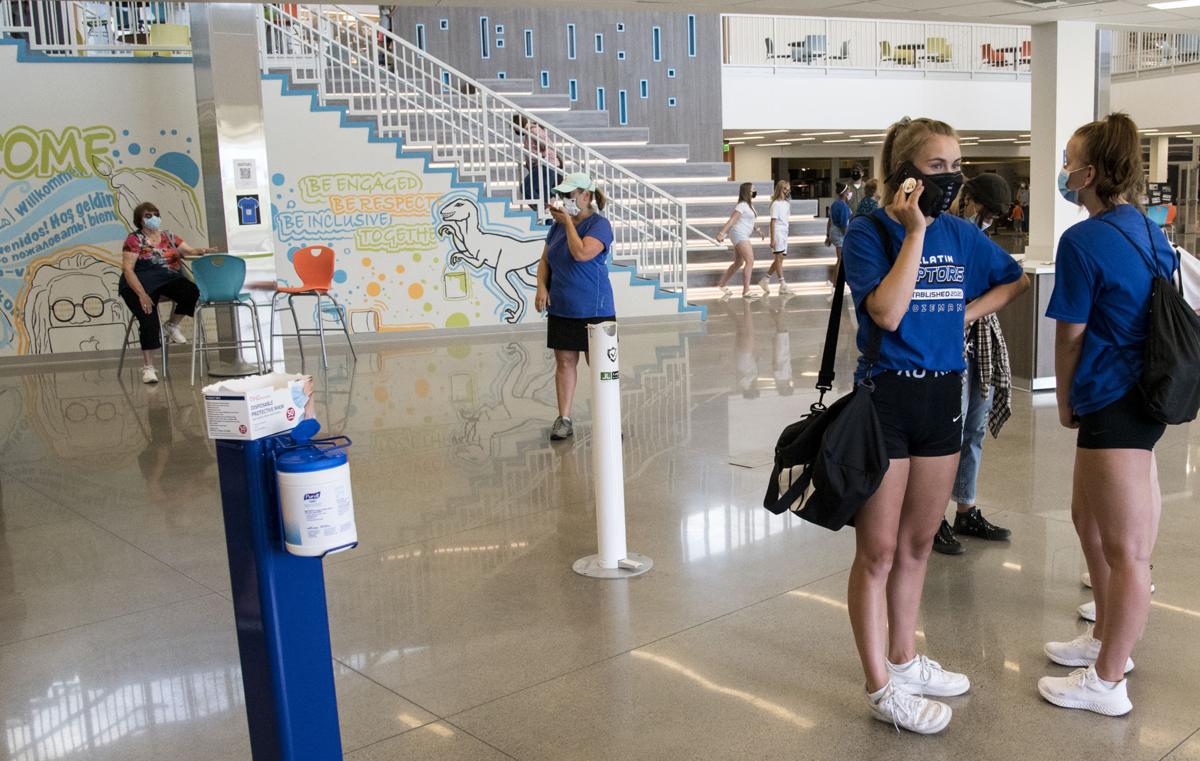 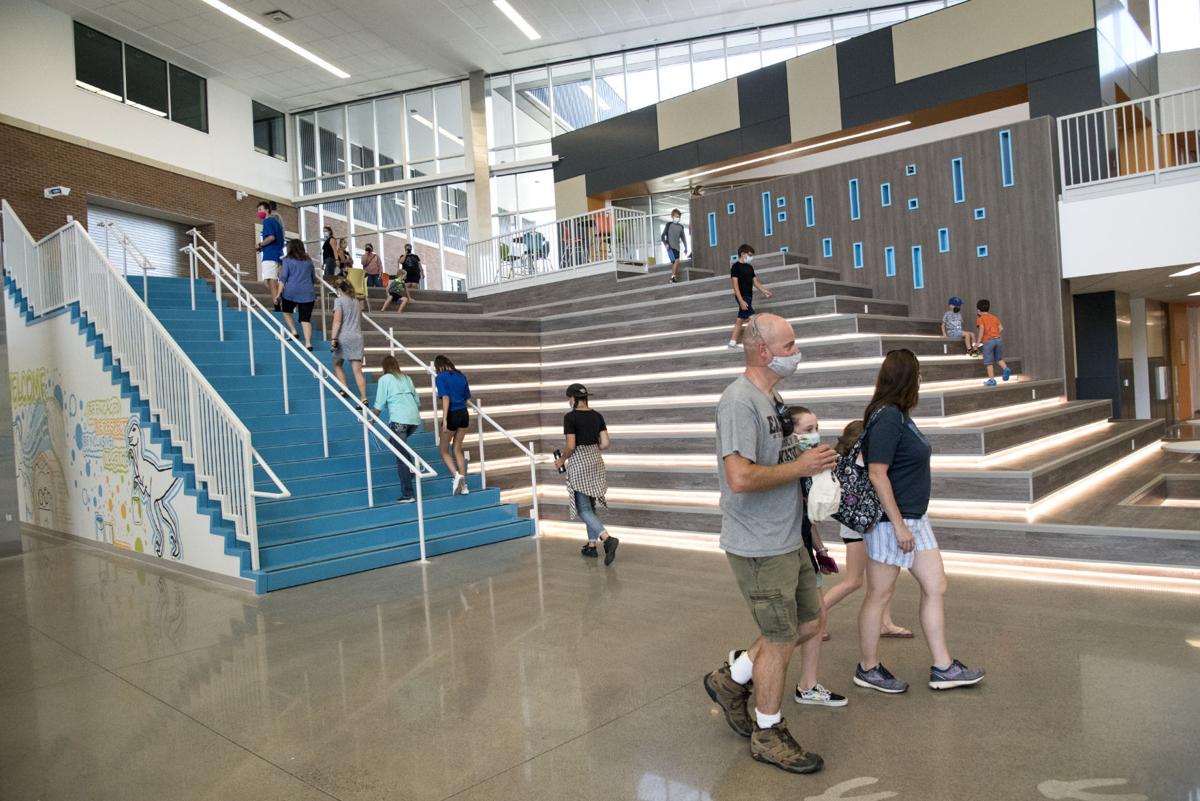 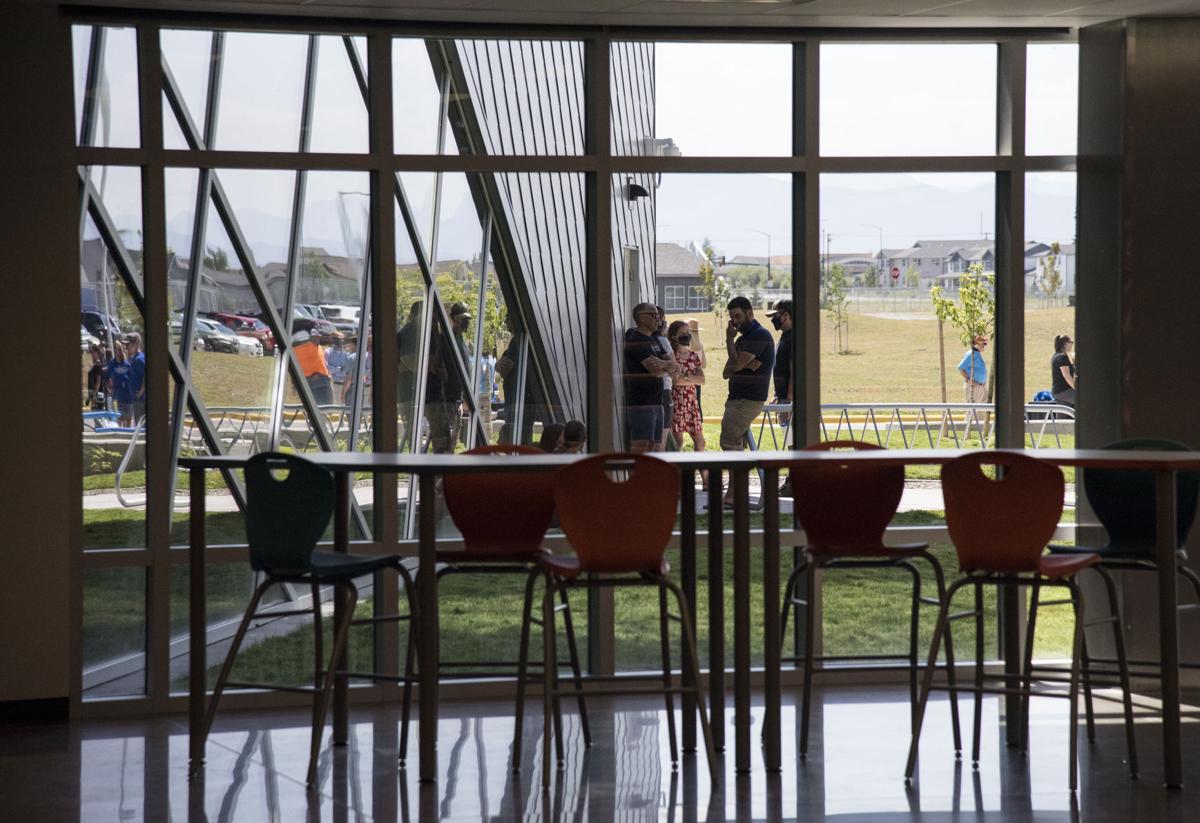 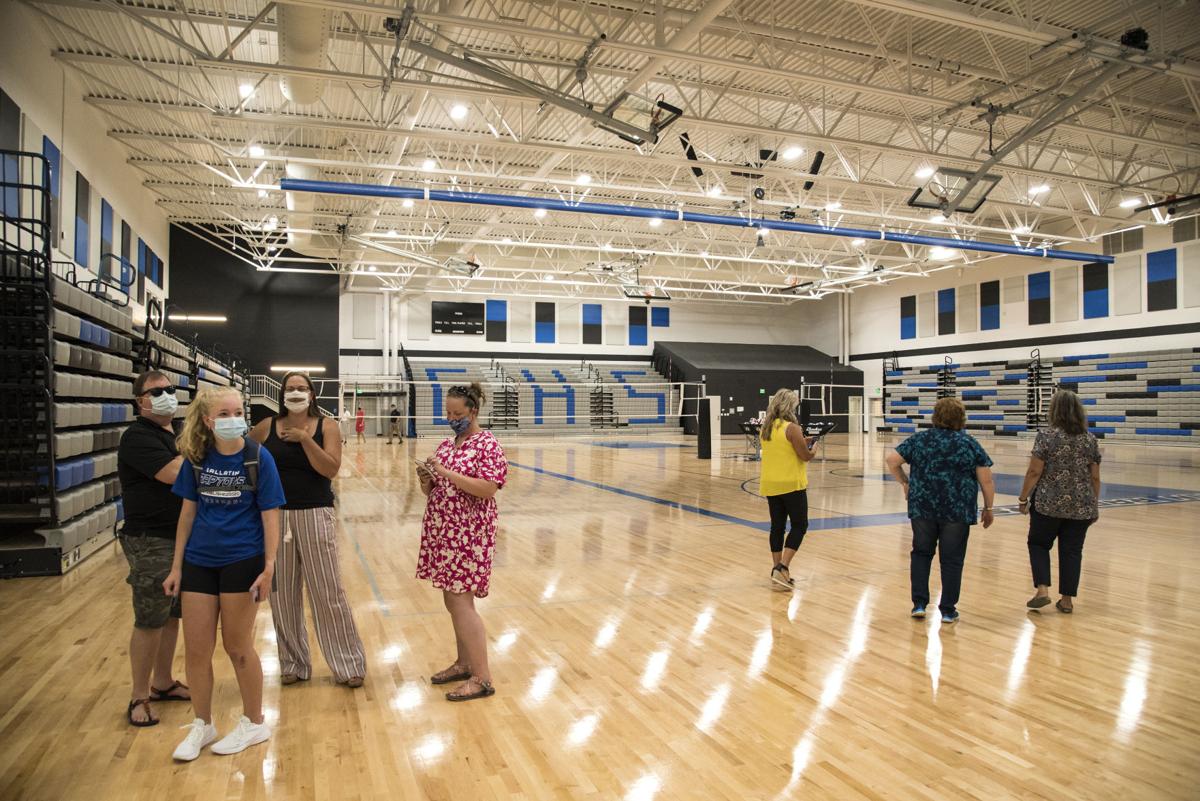 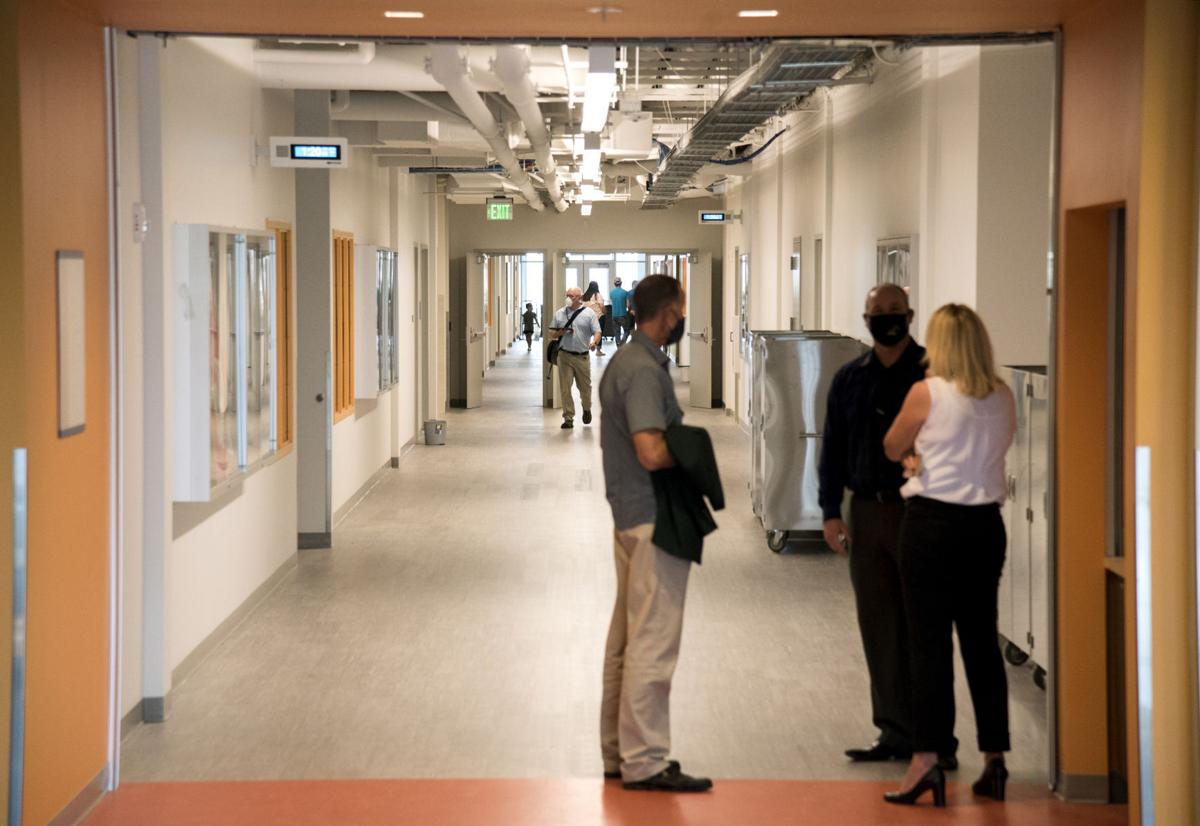 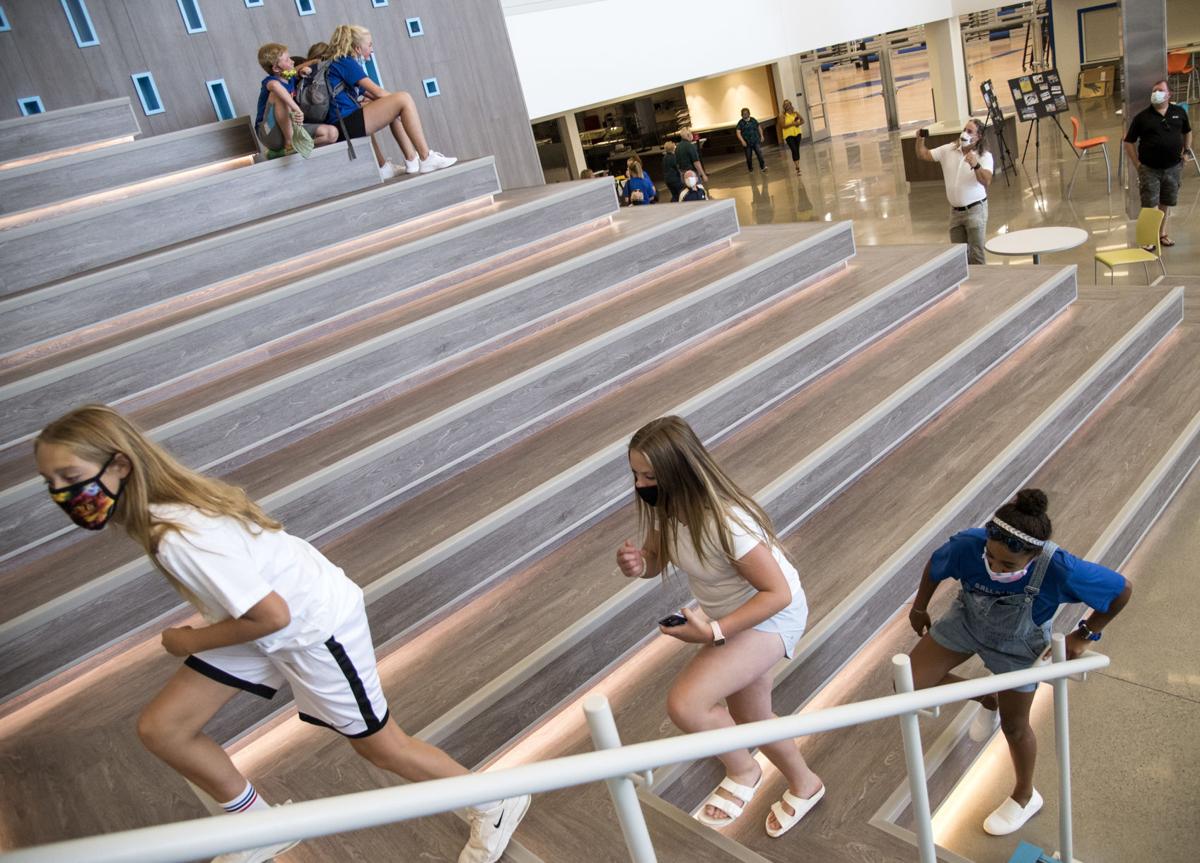 A small toy raptor, Gallatin High's mascot, is hidden next to the main stairs in the new high school on Monday afternoon, Aug. 17, 2020.

Sandy Wilson, chair of the Bozeman Public Schools Board of Trustees, cuts the ribbon at a dedication ceremony for Bozeman's newest high school, Gallatin High, on Monday afternoon, Aug. 17, 2020.

Daryl Schliem, with the Chamber of Commerce, speaks at a dedication ceremony for Bozeman's newest high school, Gallatin High, on Monday afternoon, Aug. 17, 2020.

A mix of students, parents, administrators and community members attended the ribbon-cutting ceremony, which was one of the first opportunities for the public to tour the completed $93 million building.

“We’re really excited to get a chance to start at the new school and build our community,” said Luke Terry, the Gallatin High student council president.

Terry said there would be an emphasis on creating an accepting and welcoming environment at the school for all students.

“With Bozeman High, it was the same culture forever,” he said. “It’s a new era. We’re building a new school, and we can decide how we want to do things.”

The school, scheduled to begin classes on Sept. 8, will open with about 920 students in ninth, 10th and 11th grades, said Erica Schnee, Gallatin High’s principal. Seniors will complete their high school careers at Bozeman High.

Schnee said the new school, at West Oak Street and Cottonwood Road on the northwest side of the city, was built with expansion in mind.

“Bozeman has grown so much in the last few years, and even in the last six months,” she said. “The boundary was drawn so Gallatin High would be able to grow as the west side continues to expand.”

With two high schools in town, Schnee said it would also expand opportunities for students at both schools.

Throughout the day, people were able to sign up for in-person tours of the new school, including the student commons with a wall of windows facing to the south.

Lona Voigt, a member of the Gallatin High Booster Club, said she had already given at least 20 people a tour of the school in the morning.

“The community we’re creating here is great,” she said.

Bozeman Superintendent Bob Connors, said he was thankful for the support.

“It’s going to be more individualized and class sizes will be down,” Connors said of the two high schools.

Instead of 2,400 students in one school, the addition of a second school will “give kids at both schools a chance to shine,” he said.

Construction on the three-story building started in March 2018 after Bozeman voters approved a record $125 million bond in 2017 to build the second high school and renovate the first.

The contractor, Langlas & Associates, was scheduled to finish the school in June but the original timetable was delayed due to the coronavirus pandemic. Langlas is also contracted to renovate Bozeman High, an estimated $29.5 million project that began in mid-June.

The coronavirus pandemic also changed how the first day of classes will look for the new school.

The Bozeman School Board trustees voted Aug. 10 to open the school year with students attending in-person classes two days of the week.

“We’re all disappointed we didn’t get ahold of the virus sooner,” Connors said of the decision to open with a blended model of in-person and virtual classes. “All we can do is try to control the present.”

Terry, a junior, said there is frustration among the students that they will not be starting the school year with full in-person classes.

The plan, which the Bozeman School Board passed on a 5-3 vote, has students attending in-person classes in a Monday/Tuesday or Thursday/Friday group.

Schnee said there is some disappointment in not being able to hold “massive kickoff events” for the school but said, “Every student will still get to be in the building each week.”

In the lobby of the school is a large mural to represent the school, which Schnee said is one of her favorite features of the new building.