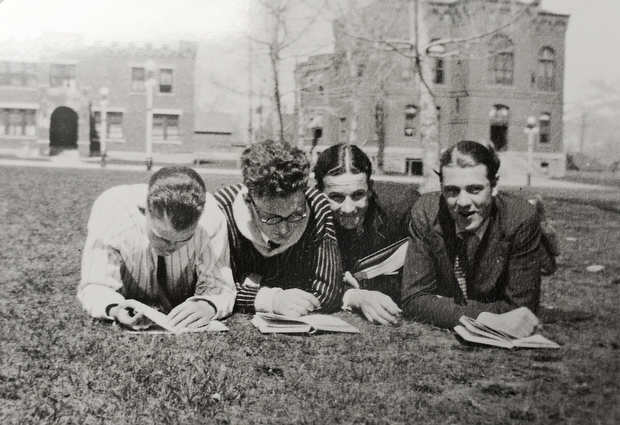 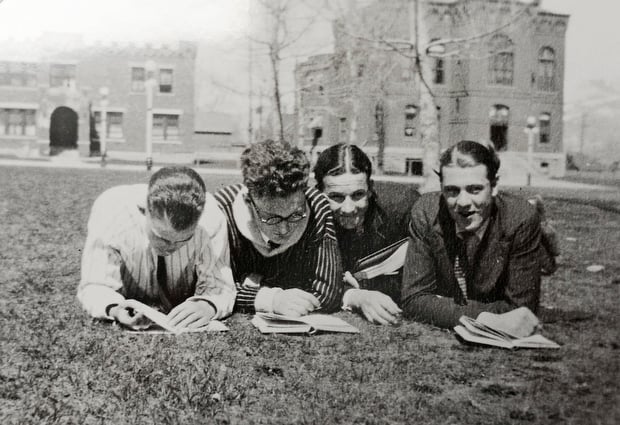 Pioneer Museum Gary Cooper far right on the lawn with students of Gallatin High School in 1921.
1 of 2

Had "Coop," as they called him, been a longshoreman, he might well have been the most popular, if not the most active, man at the waterfront bars.

Had he gone to Yale University, he might well have been the most popular man in his class.

As it was, he went to Hollywood and became the most popular man in the nation.

On the magazine's cover, the 1922 graduate of Gallatin County High School stares back at readers with a casual, quiet gaze.

Today, a whole generation of young people has grown up without knowing anything about Cooper. But their parents and grandparents remember him as one of the world's classic Hollywood heroes.

In the days before Cooper died in 1961, President John F. Kennedy called with his best wishes, according to newspaper accounts. So did his fishing and hunting buddy, Ernest Hemingway.

At the height of Cooper's career, in the 1930s and 1940s, directors generally agreed that Cooper was a natural.

"The general consensus seems to be that I don't act at all," the Montana cowboy, largely known for his roles in Westerns and as an American hero, once said.

Yet he appeared in 130 films and even turned down the role of Rhett Butler in the 1939 film "Gone with the Wind."

He won two Oscars for best actor: one in 1942, for the most popular film of that year, "Sergeant York," in which he played the most-decorated soldier of World War I; and the second in 1953 for the Western classic, "High Noon."

Born Frank James Cooper in 1901 in Helena to English parents, the actor grew up on a ranch on the Missouri River near Craig. He spent three years attending school in England, according to a 1998 Billings Gazette article. His mother brought him back at the outbreak of World War I.

Luckily for Bozeman, when the 19-year-old Cooper returned to finish school at Helena High School, he was expelled for putting Limberger cheese on radiators, according to the Gazette. His parents sent him to Bozeman to finish high school.

In Bozeman, he lived at 119 W. College St., at the intersection of College and Grand Avenue. And he stood out as the oldest and tallest boy in the class. He eventually stood 6'3" and wore size 14 shoes, according to the Gazette.

"He was tall and gangly and everybody liked him," classmate Mae Walton Lessley recalled in a Chronicle article. "He talked just like he did in the movies - natural."

In high school, Cooper had a reputation for trouble. He once took classmates to a forbidden prom in Manhattan, played hooky to hike to the "M" in the Bridger Mountains and smoked cigarettes between classes.

"Smoking never stunted my growth," the caption next to his senior picture in the high school yearbook stated.

Cooper got his first taste of acting in Bozeman, when he played the lead role in his senior class play, "The Gibson Upright," directed by Bozeman drama and debate teacher Ida Davis.

To this day, there is still a spot on a backstage wall in the Ellen Theatre in downtown Bozeman where "young acting hopeful Gary Cooper inscribed his name," according to the Ellen's website.

Years later, in a 1949 interview with the Chronicle, "Miss Davis" said Cooper had been "particularly reluctant about the love-making scenes and was rather pleased that in ‘The Gibson Upright' he had only to propose to the leading lady, who stood all the way across the stage," the Chronicle reported.

But Cooper's reluctance with the ladies didn't last. Over the years he had high-profile relationships with actress Clara Bow and American-born socialite-spy Countess Carla Dentice de Frasso. He had affairs with Marlene Dietrich, Grace Kelly and Patricia Neal.

He married Veronica "Rocky" Balfe, who acted briefly and had a small part in "King Kong," plucked from her sleep in a hotel room by the giant gorilla and dropped to her death. Her screen name was Sandra Shaw. At her request, he converted to Catholicism. The two had a daughter, Maria.

Cooper had originally wanted to be a cartoonist. He studied art at Grinnell College in Iowa for a time, but never finished.

"Despite an overseas education, Frank Cooper was never known to be academically inclined," according to a biography posted on the Grinnell website. "He enrolled and dropped out of two Montana colleges, then applied to Grinnell College.

"At Grinnell, Frank ‘Cowboy' Cooper was very well liked. He was best known for riding horses" up and down a campus terrace and, according to campus folklore, up and down the staircases of one the residence halls.

He was part of a singing quartet that serenaded girls as they entered and left the dining hall, but his "short-lived acting career at Grinnell involved an audition for the acting club in which he was asked not to come back."

He left Grinnell after two years, in the spring of 1924, according to the school's website.

He came home to Montana, managed the family ranch and drew editorial cartoons that were published in the Helena Independent Record. Later that year, his father, a judge on the Montana Supreme Court, and mother retired and moved to California and Cooper followed them.

He got his first Hollywood job as a cowboy extra in 1925 and, as they say, the rest is history.

"That fellow is the world's greatest actor," actor John Barrymore once said of Cooper. "He can do, with no effort, what the rest of us spend years trying to learn: to be perfectly natural."

He is buried in Sacred Heart Cemetery in Southampton, N.Y., alongside Balfe, who died in 2000.

His Bozeman connection has been memorialized with a star in the sidewalk outside the Ellen Theatre on Main Street.

Amanda Ricker can be reached at aricker@dailychronicle.com or 582-2628.